The proliferation of Wi-Fi connected devices, combined with the increase in video streaming, is straining in-home Wi-Fi networks. Factors including types of devices being used, distance to the nearest in-home access point (AP), and home construction materials are just some of the issues preventing subscribers from experiencing broadband speeds consistently throughout the whole home. And, operators have limited visibility into the home Wi-Fi network beyond the router/gateway to understand what is actually happening in real-time in subscribers’ homes.

As operators face mounting pressure to ensure that Wi-Fi can deliver the full speeds and range of broadband and video services within the home, they need the ability to fully monitor and manage the in-home Wi-Fi network itself.

The preeminent WLAN technology, specified by the IEEE 802.11 standard, is now associated with a global Wi-Fi market that reached $15 billion in 2015 and is estimated to more than double by 2020.[1]  While it has transformed consumer electronics and public behavior, it has also become a victim of its own success, especially in consumer’s homes.

Each subsequent release of 802.11 has boosted Wi-Fi performance, but the variety of implementations and equipment has led to inconsistency in QoS. Meanwhile, Wi-Fi has become a leading source of trouble tickets for operators – and may account for more than half of all call-center traffic.

A related problem is that service providers must resolve these calls with limited visibility. Despite massive investments to get faster broadband speeds to the home, MSOs have rudimentary tools to see within. Simple network management protocol (SNMP) and TR-069 offer basic support. Yet beyond rebooting the gateway, changing its channel assignments, and restoring or updating its settings, there is little else that operators can do to the extensive network of unmanaged devices beyond their range of view.

The home itself can also pose problems. Some construction materials impede the flow of Wi-Fi signals, and interference from appliances is another issue. Total square footage may exceed coverage, especially in higher frequencies. These impediments, combined with the demands of video, have led many consumers to take action. Some buy new routers. Many invest in Wi-Fi extenders or repeaters. But, these solutions often create problems of their own.

Few consumers know the technical details of Wi-Fi or its various implementations – but most of the issues that they face are technical, including:

- Standards: At its base, Wi-Fi is a series of variations on a standard. Just to name three: 802.11ac operates in the 5 gigahertz (GHz) band; 802.11n, in both 5 GHz and 2.4 GHz; and 802.11g, in 2.4 GHz alone. Both “ac” and “n” devices use multiple-input multiple-output, orthogonal frequency division multiplexing (MIMO-OFDM) but “g” devices use only OFDM. These and other differences can impact performance.

- Speeds and range: The 5 GHz band along with the greater channel options of “n” and “ac” yield much greater throughput than earlier standards. However, advertised speeds may overstate the case. The protocol overhead and interference in operating channel result in much lower actual throughput than advertised speed. Meanwhile, while higher frequencies are usually faster, they are less able to penetrate objects or traverse distance. Conversely, moving a device away from the home’s main router can negatively impact the performance of every device.

- Repeaters: These devices cause trouble about half the time. They may suffer from a poor link with the AP or router, meaning that a client links up with a strong repeater, but ends up with very low speed.

- Sticky clients: Mobile or tablet clients are “sticky” when they retain their connection to a particular AP, even if the signal strength has dropped significantly or a better device is closer. By hogging the available airtime, these slow-performing devices may degrade the overall performance for all other devices in the home.

These issues tend to overlap. The shorter range of the more advanced – and faster – “ac” standard, for example, may lead a consumer to purchase a repeater; yet that device could be inadequately connected to the AP or attract clients that won’t let go.

A good answer to these challenges is Wi-Fi Mesh, which combines devices, PHY (physical layer) technologies and software. By definition, Mesh enables alternate routes. In-home, that translates to a Wi-Fi router/gateway, along with two or more APs. Wi-Fi Mesh software can also be ported onto other devices, such as IP-enabled set-top boxes or DVRs.

The addition of APs extends the reach of Wi-Fi signals, potentially eliminating dead zones. But unlike repeaters, multiple Mesh APs manage mobile clients to connect at their maximum capability. It does so several ways. One is by treating multiple PHYs, 802.11 Wi-Fi and Ethernet, power line communications (PLC) and Multimedia over Coax Alliance (MoCA), as individual point-to-point Mesh connections.

The primary driver of Wi-Fi Mesh performance, however, is routing software. Similar to how IP packets are routed across the Internet, traffic on a Wi-Fi Mesh network is routed by algorithms that determine the best path. The Mesh operates logically as a single service set identifier (SSID) and continuously calculates routes according to the number of active devices, the traffic profile and any QoS required by the subscriber’s agreement with the service provider.

This kind of smart routing also enables client steering. Instead of a gateway/router using its limited perception of interference, a Wi-Fi Mesh network taps into clear channel assessment (CCA) data and collects information from all APs before making that selection.

Wi-Fi Mesh also exposes large quantities of data, making it possible to create a remote monitoring platform using intelligent APs to collect and share key Wi-Fi performance data from all devices. This type of dashboard offers engineers and operations staff a range of information, including: 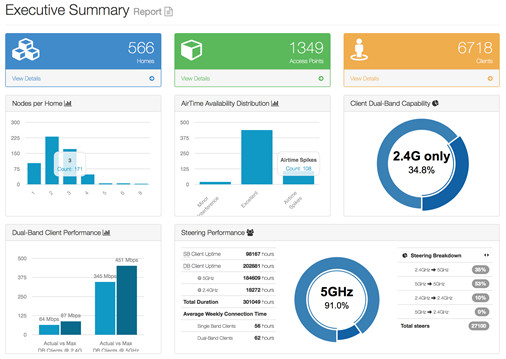 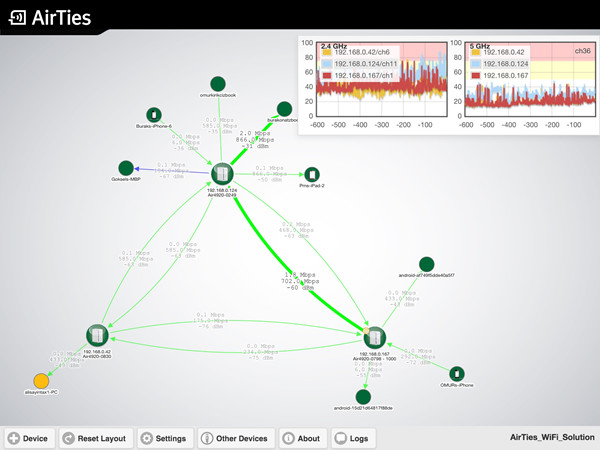 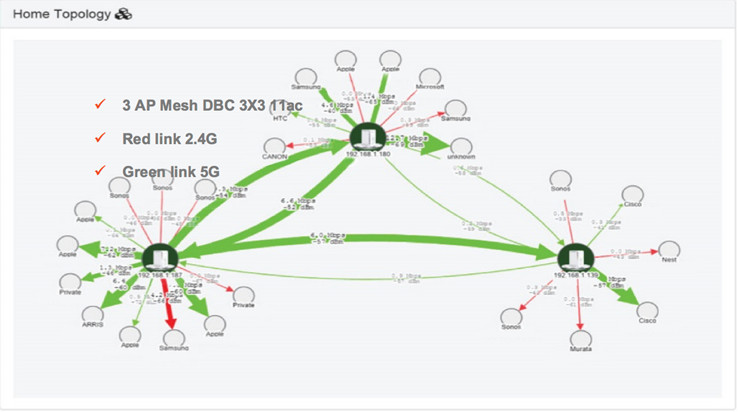 Consumers who are using more Wi-Fi devices than ever have a reasonable expectation that wireless performance within the home should be as good as the broadband service delivered to the home. When that proves not the case, many contact their service provider or opt to buy and install new Wi-Fi routers, repeaters or extenders – which often leads to more trouble calls, forcing more truck rolls, because the operator has little to no visibility into the home, beyond the managed router/gateway.

Already having invested significantly to improve broadband services and address new growth opportunities in the gigabit home, operators are undergoing a dramatic re-thinking of their in-home Wi-Fi technology and monitoring capabilities. Operators recognize that their subscribers often do not delineate between Internet delivery and Wi-Fi, and thus are focused on new efforts to improve the customer experience across managed and unmanaged devices within the home.

After working as a research engineer at the National Metrology Institute of the Scientific and Technical Research Council of Turkey (TUBITAK), Taşkin continued his career in the United States: first at Hittite Microwave Corporation in Boston MA, designing radar and microwave communications system, and later at CISCO Systems in San Jose CA, in the Wireless Access Business Unit where he developed fixed wireless access devices. Taşkin was responsible for system design outdoor wireless base station and subscriber devices providing wireless internet access. Taşkin then joined the Wireless Networking Business Unit of CISCO as a system architect. He led team of 25 engineers that developed BR1410, an IEE 802.11a compliant Wireless Outdoor Bridge. Taşkin received the “CISCO Innovator” award for a successful design and development of this product. Taşkin moved back to Turkey to join the founding team of AirTies and currently works as the company’s Chief Technology Officer.

Eliezer Dekel is the editor in chief of EAI Endorsed Transaction on Cloud Systems. He is also an Associate Editor for ACM Computing Surveys and a member of the editorial board for IEEE SDN Newsletter.  Eliezer served on numerous conference program committees and organized, or served as chair in some of them. He has been involved in research in the areas of distributed and fault-tolerant computing, service-oriented technology, and software engineering. He was recently working on technologies for providing Quality of Service, with a focus on dependability, in very large scale multi-tier environments. For this area he initiated together with colleagues the very successful International Workshop on Large Scale Distributed Systems and Middleware (LADIS). This workshop, sponsored by ACM. It was one of the first workshops to focus on the foundations of "cloud computing." He was an organizer of CloudSlam'09 the first cloud computing virtual conference. Eliezer was also involved in several EU FP7 ICT funded projects.