OpenState: An Interface for Stateful Packet Processing in Programmable Switches

Is it possible to attain better performances and to create new use cases for SDN by moving some of the smartness from the controller to the programmable switches, while keeping an easy configuration interface? This article is a brief presentation of the OpenState abstraction layer [1] concept for stateful packet processing for programmable switching. This abstraction has been designed as part of the BEBA (BEhavioral BAsed switching) project [2], a European research effort funded by the Horizon 2020 program, and dedicated to improving performances through software acceleration as well as enhancing features of programming switches for SDN, by bringing back some of the logics from the controller into the switch using vendor-agnostic solutions.

Concretely, the purpose is to provide the switches with stateful packet processing capabilities: when a packet arrives, it will not be processed solely according to the values contained it its headers (such as the protocol(s) in use, TCP/UDP ports, sender/receiver addresses etc.), but instead the switch will also take into account the packets that were previously received.

This is easier to understand with a simple example. Let's consider port knocking: this is a basic security method that consists in closing a (TCP|UDP) port on host, until a specific series of packets has been received from the sender. Imagine that the client foo, with IPv4 address 10.3.3.3, wants to connect to the server bar (10.1.1.1) through SSH (TCP port 22).

Figure 1: Simple network topology: the clients want to connect to the server through SSH.

The server bar can be directly reached on the Internet, and its administrator does not wish the TCP port 22 to look open to people performing port scans. So, they have enabled port knocking: to open the port to a client, foo for instance, the server must receive from this client a specific sequence of “knocks”. In this example, server bar waits for UDP packets on ports 1111, 2222, 3333, then TCP port 4444, in this order. Once this sequence of packets has been received from a host, the server opens its TCP port 22 for this host, and the SSH connection becomes possible. The graphical representation of this operation, in the shape of a state machine, is represented on the figure below. 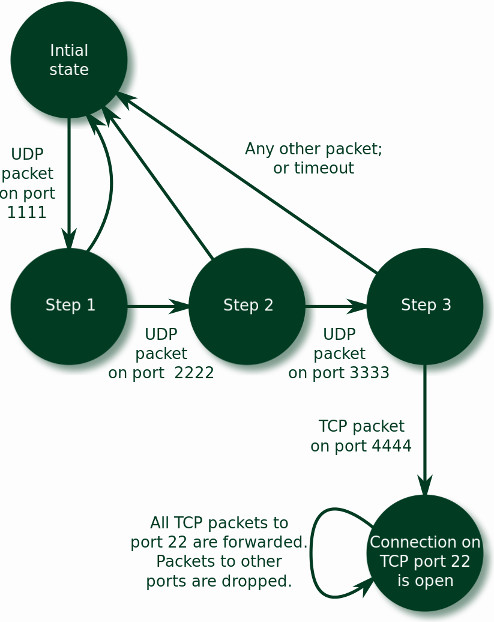 Could we replicate this mechanism inside a switch? All TCP packets from foo and addressed to bar should be discarded, until foo provides the correct UDP packets secret sequence. To recognize the sequence of packets, the switch has to keep in memory the information related to previously received packets belonging to this sequence. In other words, it must implement the state machine associated to port knocking. This is exactly what OpenState permits to do.

On a classic SDN network, the switch can identify the packets that are part of the secret sequence, but it cannot tell if this sequence is being executed in the correct order. All those packets would be sent back and forth to the controller, wasting time and resources.

Instead, OpenState brings stateful processing of packets, by proposing an implementation of simplified “eXtended Finite State Machines” (XFSM), also known as Mealy machines [3]. A Mealy machine is an abstract structure comprising a 5-tuple:

Concretely, say I am a switch proposing port knocking features: if I am in state STEP_3 and I receive a TCP packet on port 22, I go to a new state, OPEN, and I perform an action: I forward the packet to its recipient. If, on the contrary, I receive any other packet, or if the timeout fires, then the new state will be the initial state, and the action consists in dropping the packet.

How do these machines get integrated to the data plane? The OpenState abstraction layer is implemented by means of two new tables, that replace the former flow table.

The first of those tables is the “state table”.

To each flow pattern, it associates a state key instead of a direct action. The second one is called the “XFSM table”, and to a state and an “event”, it associates an action (to apply to the packet) as well as a new state. OpenState describes the following flow of table manipulations:

Not counted in the three steps is also the execution of the action returned by the XFSM table, that is used to actually process the packet.

Let’s see now what it gives with the port knocking example:

In this setup, at a given time, the traffic from each host is in one of the following states:

For 10.1.1.1 and 10.2.2.2, the state is always OPEN. But for 10.3.3.3, it depends on the progress of the secret sequence, so the state may evolve. Thus, the state table itself can evolve, without the intervention of the controller: the switch tracks the succession of states.

For instance, assuming that 10.3.3.3 has sent the first packet of the sequence (UDP on destination port 1111), the switch starts with the first step: state table lookup. The state table is as follows (when searching for a match, the tables that are provided here are scanned from top to bottom, so the packets not matching any other pattern will be assigned the DEFAULT state by the last flow pattern):

But how exactly are these states expected to evolve? All the next possible steps are in the XFSM table. So the switch carries on to the second step, and performs an XFSM table lookup. This table, depicted below, has two main blocks: “Flow matching pattern” and “Actions”.

The second block of columns gathers two columns, “Action” and “Next state”. Once the matching row has been determined with the state and events associated to the packet, the corresponding action, found in the third column, is applied (e.g. Drop).

Here is the XFSM table coming with our example port knocking use case: 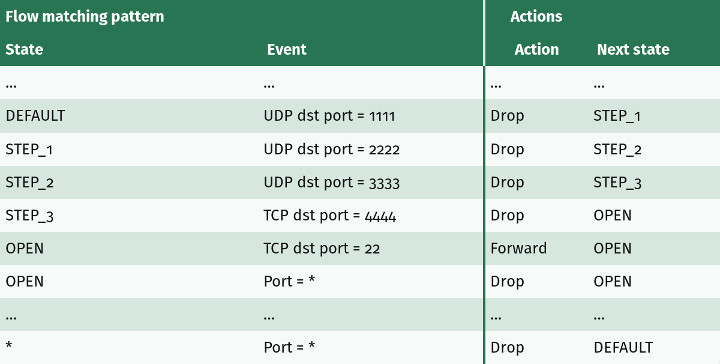 At last, the state table update occurs. The state for the flow of the packet is modified, as indicated by the state name found in the Next state column.

Let’s connect the three steps: if the first packet of the sequence has been previously received (the state is STEP_1), and a new packet from host 10.3.3.3 is received, the State table is scanned first. The third row from the top is hit. It returns state STEP_1, and this information is used to search the second table. Two cases:

If the packet received is not a TCP packet towards port 22 (second case) then the packet is dropped, and the state is moved to DEFAULT. As a consequence, the port knocking sequence is “reset”.

If, on the contrary, the packet targets TCP port 22, the packet is dropped all the same, but the state for this flow—the flow of packets sent from 10.3.3.3 to 10.1.1.1—is changed to STEP_2. This means that the State table is modified, and now looks like this:

The next packet from 10.3.3.3 will match the third row again, but this time it will return STEP_2, so the switch will look for a different row in the XFSM table. If again a new packet from the port knocking sequence is received, the state will move to STEP_3, and ultimately to OPEN.

These were the main lines of OpenState. With a similar setup, it is possible to implement many applications relying on stateful processing, including load balancing, failure detection and recovery, in-switch ARP handling, middlebox or distributed protection against DDoS, and others [5 (D5.1, D5.2)]. BEBA research project heavily relies on this concept, and goes further. Some related items include:

Regarding the BEBA project as a whole, it entered its final phase. This is the interesting part, with results coming from different sizes:

Hopefully, it will help deploy a variety of stateful applications for even faster SDNs!

Quentin Monnet joined 6WIND as a R&D Engineer in 2015, and works on high performance networking software. Just before that, he defended his PhD thesis about security against DoS in sensor networks at “Université Paris-Est”, France. He is involved in European research projects about fast and flexible packet processing, and has been modestly contributing to several open-source projects.