Abstract: To open-up the wireless interfaces and achieve cloud benefits and agility based on SDN/NFV, Mobile CORD (M-CORD) is presented. The mobile Edge solutions enabled by M-CORD demonstrate practical and scalable models for services that require higher throughput and lower delay while minimizing the resource impacts on core network functions.

Mobile networks today are facing the challenges of explosive mobile data growth mostly driven by smart devices and over-the-top (OTT) services like video streaming, social networking, and gaming. These challenges will be even more accelerated by emerging IoT use cases e.g. smart cities, and bandwidth-hungry applications such as HD video, Augmented Reality, and Virtual Desktops.

On the other hand, such demands can be an opportunity for mobile operators if infrastructure is ready for the proliferation of devices, traffic, and new business models. However, innovating with new mobile network services in an agile way is not only complicated today, but also time-consuming due to closed interfaces and embedded/monolithic control functions.

ON.Lab and partners including AT&T, SK Telecom, Verizon, and collaborators (Cavium, NEC/NetCracker, Radisys, Cobham, Airhop) will extend the ON.Lab Central Office Re-architected as a Datacenter (CORD) project to exercise RAN and EPC component disaggregation and virtualization, providing customized services at the mobile edge on an open platform. This is intended to support PoCs for service opportunities such as: Video on Demand, Personalization of Services for Local Communities, Localized Security-as-a-Service, and edge services such M-Health, and IoT-as-a-Service.

ON.Lab’s CORD [1] project seeks to bring the economies of a datacenter and the agility of the cloud to central office (CO) functions of telco service providers.

CORD is an effort to re-invent the CO by replacing purpose-built devices with more agile software-based ones through leveraging the following three significant practices: (1) SDN, which separates the network’s control and data planes, allowing for more programmable and simplified control/data planes focused on innovation, and support for white-box hardware; (2) NFV, which enables replacement of hardware-based network appliances with software-based virtual machines, reducing capital and operational costs, and increasing agility; (3) Cloud, which enables innovative and scalable services with rapid time to market.

Mobile operators want to make their networks cost efficient and performant, flexible via programmability and agile for new services that can cope with the challenges of user demands, as well as to create new revenue.

However the current cloud service model is poorly suited for delay-sensitive applications. This concern becomes clear in use cases such as video applications for smart cities and industrial M2M applications. For these use cases, focusing on the network edge has attractive and distinguishing features such as proximity to end-users, location-awareness, radio resource information awareness, and dense geographical deployment. These advantages can enable low-latency, high-throughput and customized services that bring better user experience while the reducing load on core networks.

To demonstrate the opportunity of service deployment at the mobile edge, ON.Lab, partners and collaborators are developing the M-CORD platform. M-CORD will not only utilize virtualized RAN and EPC functions, but also disaggregate control functions from the data plane. M-CORD will also demonstrate how micro-cells can be mapped to multiple control planes with customized resource optimization, increasing capacity and reducing delay for critical localized applications such as services for hospitals, schools, and smart cities.

M-CORD’s mobile-edge design will include: (1) a single SDN control plane built using ONOS to control virtualized RAN and EPC components; (2) SDN/NFV-based resources that can be built and sliced to provide mobile services with the performance needed. Together these will be used to demonstrate several network services at the mobile edge such as Self-Organizing Network (SON) applications and local Caching. 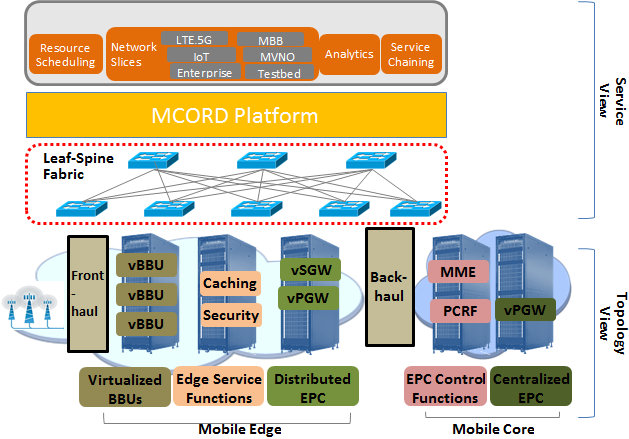 The following diagram shows mobile edge services such as video cache deployed together with local Evolved Packet Core (EPC) co-located with virtual Baseband-Units (vBBU), illustrating possible opportunities of opening up the mobility interfaces with further disaggregation in the EPC and BBU.

Like other CORD PoCs, the M-CORD platform architecture adopts the Openflow based SDN control method of ONOS and building blocks based upon commodity hardware and open software solutions. Cost efficiency and agility are expected to be achieved by this framework. This architecture enables customized service chaining and policies, and supports real time analytics observability at the network edge. Through it, service providers can offer customers sliced virtualization resources and the ability to manage their own mobility control strategies.

M-CORD will replace standard mobile network components e.g. BBU, MME, SGW, PGW with white-box servers, switches, and openflow-enabled interfaces to enable services such as FWaaS, DNSaaS, Caching-as-a-Service, etc. This is intended to demonstrate a more agile and scalable service environment, in which mobile network functions can run as services which are deployed dynamically and on-demand. By this, overutilization and underutilization of network resources is avoided.

With network functions deployed at the mobile edge, edge-caching can improve user QoE (Quality of Experience) via enhanced with low latency and high bandwidth, while benefitting the service provider via reduced backhaul traffic and central network system load.

M-CORD will demonstrate the value of edge-based services for boosting resource optimization, capacity, and QoE for latency-sensitive applications. The SDN/NFV-based deployment and programmability of M-CORD will demonstrate a much smarter and cost-effective network platform for service providers. The M-CORD architecture is intended to enable operators and their partners to tap into new, localized high-margin revenue streams offering services such as gaming, streaming, IoT, Public Safety, Big Data Analytics, Mobile Health, Education, Smart Cities, Smart Vehicles, and much more, with improved QoE and agility. M-CORD’s commoditization of open source components and interfaces will open-up wireless interfaces while promoting a level playing field with OTT services. M-CORD will demonstrate an innovative path via which key cross-industry stakeholders – Service providers, MVNOs, equipment providers, software vendors, and industry bodies – can take 5G from the lab into the mainstream.

Mingeun Yoon has more than 13 years of experience in the area of mobile core network since he joined SK Telecom in 2002. He is now a member of 5G Technology team of SK telecom R&D center, where he is working on designing the next generation mobile network architecture mostly by leveraging SDN and NFV.

Tom Tofigh is currently a Principal Member of Technical Staff in the AT&T’s Domain 2.0 architecture and planning Labs at AT&T. He has been working with On.lab on AT&T specific use cases for CORD projects. He holds over 30 patents awarded and many more pending.

Guru Parulkar has been involved in the field of networking for over 25 years, including academic work at Washington University in St. Louis prior to Stanford, and private sector experience at several startups, Cisco, and the National Science Foundation. He is currently the Executive Director of Open Networking Research Center (ONRC), Executive Director of Open Networking Laboratory (ON.Lab) and Consulting Professor of EE at Stanford University.

Eliezer Dekel is the editor in chief of EAI Endorsed Transaction on Cloud Systems. He is also an Associate Editor for ACM Computing Surveys and a member of the editorial board for IEEE SDN Newsletter. Eliezer served on numerous conference program committees and organized, or served as chair in some of them. He has been involved in research in the areas of distributed and fault-tolerant computing, service-oriented technology, and software engineering. He was recently working on technologies for providing Quality of Service, with a focus on dependability, in very large scale multi-tier environments. For this area he initiated together with colleagues the very successful International Workshop on Large Scale Distributed Systems and Middleware (LADIS). This workshop, sponsored by ACM. It was one of the first workshops to focus on the foundations of "cloud computing." He was an organizer of CloudSlam'09 the first cloud computing virtual conference. Eliezer was also involved in several EU FP7 ICT funded projects.