Abstract — This paper introduces Mobile Edge Computing (MEC), explaining how cloud resources placed close to the consumer can be harnessed to improve user experience across a range of use-cases. MEC provides a practical application of Network Function Virtualization (NFV). The paper concludes by discussing the organisation and operation of the ETSI MEC Industry Standards Group (ISG).

Mobile users expect better performance and user experience, driven by the prevalence of smart-devices able to offer services such as high-quality video in a highly-mobile environment and by the emergence of the Internet of Things (IoT) comprising a very large number of small, low-data rate devices.

Whilst well understood, current mobile architectures are fixed in nature, delivering current applications well. However, today’s 3rd Generation Partnership Project (3GPP) solutions are based around a static, anchor-based topology, which, whilst enabling a degree of mobility within the network, does so with sub-optimal latency and paths through the mobile packet-core network.

MEC enables resources to be placed closer to the end-user, taking into account the relative locations of producers and consumers. By referencing the underlying radio transport, all resources, Radio Access Network (RAN), IT services and packet core, are exposed to applications, allowing the full infrastructure state to be considered.

The basic premise of MEC is to place generic compute and storage close to the network edge in a mobile network environment. This extends the cloud, typically a centralised, single resource, to the local environment. Whilst the MEC environment would be embedded in and managed from the operator environment, it is intended that the compute/storage resources will be exposed via a set of APIs such that application operators and developers can utilise their capabilities. Figure 1 shows the position of the MEC engine within a mobile architecture.

Compared with the traditional 3GPP architecture of tunnels from the edge to centre of the network where data service breaks-out to either the Internet or to corporate data services (for example, by the use of GTP tunnels centred on the P-GW), MEC envisages data break-out at the edge of the network using current Local IP Access (LIPA)/Selected IP Traffic Offload (SIPTO) techniques, which is then handled by applications residing on the MEC engine. Compared to centralised SDN solutions, MEC is a distributed architecture where content and applications will be positioned by application providers.

This proximity to the user enables higher bandwidth and lower latency than would be possible in the tunnelled environment, but offers other benefits, such as the ability to run locally-targeted services on edge devices which are closely-coupled to the radio network. Exposing Radio Network Information Services (RNIS) [1] provides a tighter coupling between the quality metrics available from the radio node (e.g. LTE Base Station) than is currently possible as this data is currently buried deep in the core network.

The MEC community has worked to detail several use-cases that are not predicated on bandwidth and/or latency improvements. Next, we overview some of these identified use-cases – see [2] for more details.

Consumption of high-bandwidth video on mobile devices has grown rapidly in recent years, typically delivered from caching services. Unlike wireline networks where Content Delivery Networks (CDNs) exist as overlays intercepting content requests and enabling delivery from topologically close caches, in a cellular environment, content is served from the centre of the network. This architecture enables easy mobility of the user across multiple radio attachment points, but it does not allow local selection of content cache resulting in sub-optimal IP data flows. In addition, the central content cache has no knowledge of the quality or capability of the radio link, simply seeing an IP request for content.

- Through interaction with the central content provider, content may be positioned closer to the consumer, eliminating the slow start and buffering of content often experienced in mobile environments. Where there are a large number of potential consumers within the domain of the MEC server, e.g. at an aggregation point, the MEC engine acts as multicast replication device.

- Where it may not be beneficial to pre-position content, the CDN service now has visibility of the RNIS and content may be locally adapted (e.g. re-rated, offered at a lower resolution).

Other services to enhance consumer experience such as augmented reality, shown in Figure 3, customer information, safety-related services or analytic information to enterprises (e.g. retail customer foot-fall) can also be considered, where object representation is used between core and edge to reduce traffic flow.

Given the projected development of the Internet of Things (Figure 4), MEC may also be used for IoT applications. IoT solutions typically involve a large number of devices, but small amounts of data and a range of tolerances to latency. 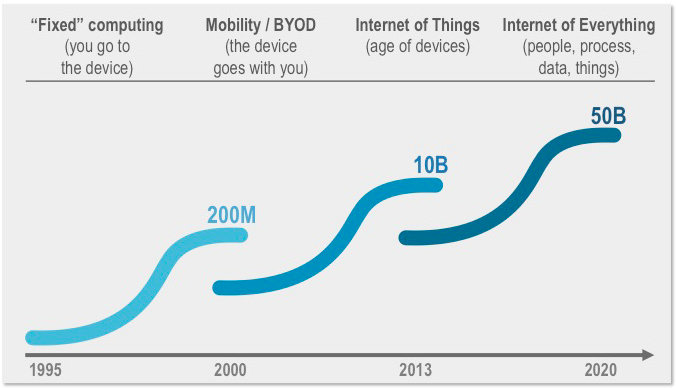 For example, in an industrial environment where instrumentation is used for a control or manufacturing process and low-latency is key, MEC will provide an engine whereby local application decisions can be made at optimum speed while preventing leakage of potentially sensitive operational data to the public network.

For other, non-latency critical applications, for example where data changes slowly in relation to network transport time, the ability to host local applications will provide resilience in the event of a network failure.

Closely aligned with the MEC service edge, Fog computing is a method to realise the predicted scale of IoT by moving portions of applications to edge devices in a co-ordinated and centrally orchestrated fashion. Fog can therefore be seen as an example application that could make use of the availability of MEC engines around the mobile network. Fog management tools would be able to understand capabilities around the environment and distribute intelligence as needed.

The ISG has been formed to produce an interoperable and deployable Group Specification across a number of release cycles. The ISG liaises with groups both within ETSI (e.g. the NFV ISG) and other relevant bodies such as IEEE and 3GPP. Early proof-of-concepts and prototypes are being built and demonstrated, together with development of an interoperability framework including test support, tools and SDKs with the aim of promoting a multi-vendor, standards-based landscape. The ETSI MEC White Paper [1] details the organisation and operation of the ISG.

As a complementary technology to SDN and NFV, MEC will provide an enhanced experience for consumers by delivering optimised bandwidth and latency for varying use-cases and open platforms for the deployment of new applications.

MEC is designed as a key component of the 5G packet-core network. It will bring the ability to deliver a range of user-outcomes such as different throughputs and latencies across a wide range of use-cases.

The MEC ISG is currently working towards publication of the MEC Group Specification during 2016. The group also works to increase the interest in and promote the adoption of MEC through presentations at industry events and through the support and promotion of Proof of Concepts (PoCs).

David Lake is an Architect in the Mobility CTO group at Cisco, having joined Cisco in the UK in 1998. David has over 25 years’ experience designing and building networks to support a multitude of services, from transactional data to voice and video in both Enterprise and Service Provider environments, and where the two worlds cross. He has an interest in IoT wireless and core networks and represents Cisco at the Wireless IoT Forum and the ETSI MEC ISG. He holds a BSc in Electronics and an MSc in Telecommunications.

Kostas Pentikousis is the Head of IT Infrastructure at the European Center for Information and Communication Technologies (EICT GmbH) in Berlin, Germany. Previously, he was Senior Research Engineer and standards contributor and delegate at Huawei Technologies. He was earlier Senior Research Scientist at VTT Technical Research Centre of Finland and ERCIM Fellow. He received his Ph.D. in computer science from Stony Brook University.

His research interests include network architecture, system and protocol design and implementation. Visit http://linkedin.com/in/kostas for more biographical details and to get in touch.