Edge Definition and How It Fits with 5G Era Networks

From the IEEE workshop that took place in November 20151 on Open Mobile Edge Cloud (OMEC):

Note that this definition substantially re-architects the whole network. Key components are an application delivery framework on a cloud based system with key functionalities refactored from NG RAN and Core.

The broad set of use cases outlined in various research and standards bodies points to new set of applications that are limited by human Physiology and Psychology2.

What differentiates the 5G era networks is the ability to address varying degrees of requirements (in delay, throughput, types and quantities of devices, etc.) concurrently with a unified framework. This almost dictates a new architectural component that is in close proximity to end users/devices with at most 10km distance to provide the new control and steering applications brought by new use cases.

These requirements are already known very well within the industry and there are these approaches within the 5G community to address those3 as summarized in Figure 2.

Figure 2. Drivers for a evolved RAN in support of 5G era

All Architectural work should be based on a set of Nonfunctional Requirements (NFR) on Technology, Business, and Quality. These are the high level requirements and constraints that determine the evolution direction. Then the architecture4 becomes the functional implementation of these requirements based on these constraints. The strategic NFR might be:

Technology: e.g., use this vs that hypervisor

Business: e.g., create ROI on almost everything, create monetization at the edge, future proof everything etc.

Quality: e.g., provide Resiliency as a key architectural principle, Look at QoE in addition to QoS, do complexity/robustness analysis on services and infrastructure, etc.

2. Call to collaboration on OMEC on a common agenda

Key questions that needs to be answered for the architecture of OMEC is to determine how to merge various activities at the edge on a common platform based on the NFR constraints:

Determine Storage, Compute and Communication needs in a holistic way

Storage: Cloud-based services has originated with Storage and Compute to leverage economies of scale of these common tasks on common (inexpensive) components, and provide high level functions such as resilience through architectural means (SDN/NFV, etc.). However, to address the use cases covered under initiatives such as fog networks, where there are lots of “under-utilized storage” resources in the edge devices, one should create pooling mechanisms and control and management of those. Depending on use case, “ad-hoc” storage networks consisting of enterprise workstations, home servers, local CDN servers, TV set-top boxes, etc. can be pooled to create user slices. Resilience (security, reliability, performance etc. ) can be provided by the OMEC infrastructure using variety of methods (Reed-Solomon coding to provide additional reliability for example.

Compute: Computing at the edge with user devices included are already playing important roles. Edge analytics is a rapidly growing field to process and make use of local traffic in ms latencies. There is also a broad set of new requirements coming from 5G use cases such as Tactile Internet, realtime video traffic optimization etc. Various industry initiatives are creating environments where Application programs such as Analytics are easily pluggable into the OMEC. Furthermore, additional resources obtained from edge networks (e.g., fog networks) that are time-critical and client-centric tasks should be placed in close proximity to the users.

Communication: 5G Era will include a communication infrastructure quite different than what LTE networks currently provide. The cellular networks provide a data plane that extends all the way to the mobile core, it is totally centralized. The control plane is a distributed infrastructure consisting of MMEs, S-gateways, P-gateways, etc. a very distributed system. What we have learned in the study of SDN/NFV frameworks that is being employed in effect is exact opposite: the 5G era will have a quite centralized control plane and a distributed data plane. The desegregated network functions view outlined in Figure 1 gives us a new opportunity to implement this vision. The necessary additional control, configuration and establishment of reachability through the underlying OMEC mechanisms will help provide a new no-cell approach (or create your cell as needed) for all users (e.g.,Wi-Fi , sensory, and ad-hoc networks) currently relying different approaches. Fog networking architecture will be part of the overall communication infrastructure through APIs for new functionalities including network measurement, control, configuration and service definition. Since the future edge devices are much more powerful and diverse, the advanced functionalities can be easily implemented in the edge devices with the benefits of being closer to the network edge. However, some of the networking tasks that require global connectivity and visibility of the network should be still carried out in the OMEC. Some additional helper nodes, such as NG access points will be part of the overall vision as shown in Figure 3. 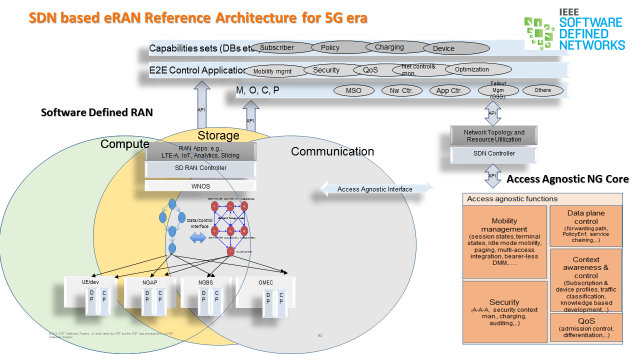 In Cloud based systems compute, storage and networking components are key to deploying a system that could address the applications we could deploy. There are key questions of how to mix the C, S and N components to deliver a set of applications. This is similar to determination of “eigenvalues”, that is, scaling factors, and “eigenvectors”, that is, fundamental composition of C, S and N. Initially cloud based systems were deployed to have compute and storage components only, however bringing a broad set of networking applications and combining them with compute and storage is the right approach in creating systems that will benefit most of future applications envisioned. Many questions should be addressed quickly through sets of Proof of Concept studies to answer some of these quickly and through global collaborations. There are a great many organizations, groups, research bodies that are addressing the “cloud” based service architectures: IEEE (Open Mobile Edge Cloud), ETSI MEC, IETF, different protocols to address the networking issues, 3GPP on radio interface and control plane/user plane separation, local traffic issues, ITU-T FG on IMT 2020 on fundamental gaps etc. Now is a good time to bring together some of these ideas and put the weight of all industry to specific key areas to make meaningful progress.

He is also the co-lead of IEEE SDN initiative preindustrial committee. He graduated from METU, with EE BS and MS degrees and a PhD degree from University of California, Berkeley in EECS. Cagatay also obtained an Executive MBA on International Business from Wharton.