The rapid emergence of Software Defined Network technologies, together with the ever-growing number of mobile Internet users is paving the way to a radical change in Next Generation Network Infrastructures. However, the requirement to continually cope with the increasing range and number of user demands is transforming telecom operators into merely dumb pipe providers, while Over-the-Top service providers are gaining momentum utilizing their resources and infrastructures.

Meanwhile, telecom operators urgently need to transform their infrastructures, especially to accommodate the requirements of the “everything is fully connected” approach. The path forward is clear: telecom operators must radically change their communication networks in order to support this huge transformation, otherwise it is almost certain that their revenues will decline.

Those trends are strongly supported by standardization bodies, which are pushing for standardized architectures and interfaces in order to allow interoperability between different vendor solutions. However, at this stage, it is rather complex to foresee a clear definition of the interfaces and protocols without Proof of Concepts which can be used for validating the proposed solutions.

Fraunhofer FOKUS and TU Berlin collaborated on integrating OS solutions together with industry and academia, in their so called “testbeds to go”. Exploiting their expertise in analyzing Next Generation Network (NGN) Infrastructures and implementing versatile tools, last year they launched a new open source platform, Open Baton [3][4]. This new platform makes it possible to build a complete NFV environment based on the ETSI NFV MANO [5] specification.

Open Baton enables Virtual Network Services’ deployment on top of multiple cloud-infrastructures. In its second release, Open Baton switched to an AMQP (Advanced Message Queuing Protocol) based standard messaging system (RabbitMQ) that provides a standard interface for the communication between entities and simplifies the interoperability with external components and with Virtual Network Function Managers (VNFMs). In addition, an extended set of new external modules have been released, including an auto-scaling system for the automatic runtime management of the Virtual Network Function operations and a fault management system. The event mechanism was also improved, providing interested entities with a more precise mechanism for retrieving VNFs’ lifecycle events. These modules, combined with the improved plugin mechanism and the Network Function Virtualization Orchestrator Software Development Kit (NFVO-SDK), allow the fast prototyping of new advanced features without requiring any modifications to the orchestration logic. 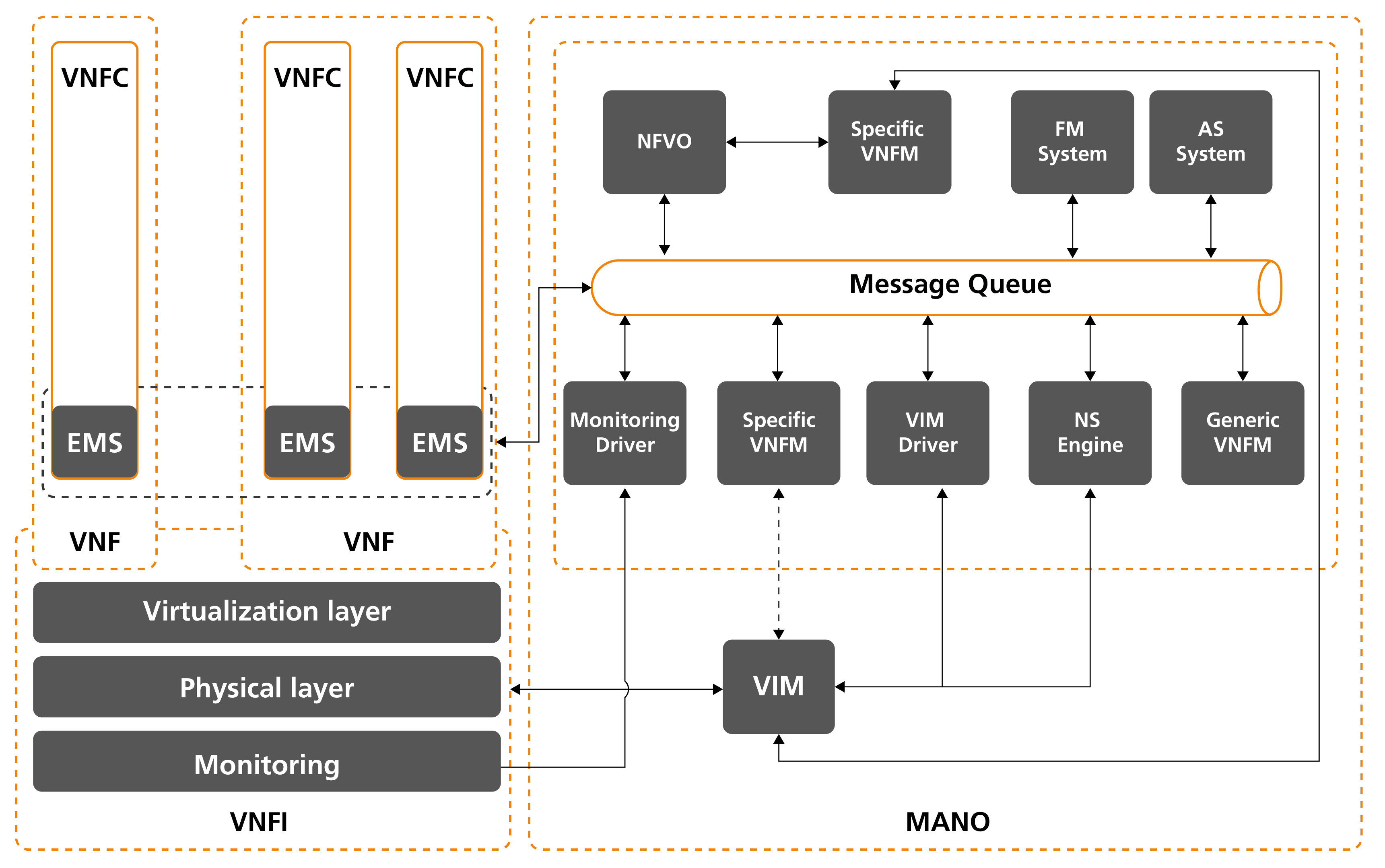 Each of these components can be started or stopped independently according to the use case. Open Baton (rel. 2) combined with a monitoring solution (i.e. Zabbix) represents the most advanced open source MANO platform available for NFV prototyping. The platform can be easily installed on existing cloud infrastructures, such as OpenStack.

In addition, the Open Baton team is already working on new features which will be added soon on the github repository. Those features include but are not limited to the application of machine learning concepts in the context of autoscaling, very useful for meeting the Service Level Agreements (SLA) Key Performance Indicators (KPIs) at runtime, an extension of the VIM plugin for interoperating with Amazon Cloud and CloudStack, and the instantiation of network slices in multi-datacenter scenarios.

The main objective is to provide a set of tools which can be used by researchers around the globe to build their own 5G/SDN/NFV/MEC testbeds, as well as to create the knowhow required for emerging 5G standards with initial Proof of Concepts (PoC). Open Baton can be integrated with other “OpenXXX” toolkits developed at Fraunhofer FOKUS in the context of the FOKUS 5G Playground [6][7], which combines both Open Source toolkits and closed source toolkits/pre-products developed by Fraunhofer FOKUS and TU Berlin.

Thomas Magedanz is a professor in the electrical engineering and computer sciences faculty at the Technical University of Berlin, Germany, leading the chair for next generation networks (Architektur der Vermittlungsknoten / AV) supervising Master and PhD Students. In addition, he is director of the 'NGNI' division at the Fraunhofer Institute FOKUS, which provides toolkits and open experimental platforms for fixed and mobile Next Generation Networks, service oriented architecture based Service Delivery Platforms, and the Future Internet for international operators and vendors. Prof. Magedanz is one of the founding members of FOKUS (1988) and member of the management team. Prof. Magedanz is a globally recognised technology expert, based on his 20 years of practical experiences gained by managing various research and development projects in the various fields of today's convergence landscape (namely IT, telecoms, internet and entertainment). Prof. Magedanz is senior member of the IEEE, editorial board member of several journals, and the author of more than 250 technical papers/articles. He is the author of two books on IN standards and IN evolution. Prof. Magedanz is a globally recognized tutorial and keynote speaker at major academic and industrial workshops, conferences and symposia around the world. Examples include: IEEE IN workshop, IEEE ISS, IEEE NOMS, IEEE IM, IEEE ICC, etc.

Giuseppe Antonio Carella is a Senior Researcher at the Fraunhofer FOKUS and at the Technische Universität Berlin (TUB). He received his M.Sc. in Engineering of Computer Science from the Alma Mater Studiorum University of Bologna in 2011. During his studies he focused on Next Generation Network Infrastructure, especially in IMS services, like presence and messaging. In 2012 he joined the Next Generation Networks (AV) team at the Technical University Berlin, where he started investigating topics related with SDN and NFV in the context of his PhD studies. His strong background in Cloud Computing is the basis of his research and contributed to the virtualization of the software-based Network Functions developed at Fraunhofer FOKUS, namely OpenEPC and Open5GCore. He is currently leading the team developing the Open Baton toolkit an open source platform providing the means for building a comprehensive NFV environment.