Abstract: We present a path for building an SDN-based control plane that can seamlessly extend over a converged access infrastructure. The proposed solution is facilitating resource abstraction and NFV functionality and we demonstrate an abstraction for a GPON access system.

Recent trends towards SDN and NFV in access and core

Several wireline and wireless technologies are competing to dominate next generation access networks. Due to the bandwidth requirements optical networks will have a major role in these developments. Among them, Passive Optical Networks (PONs) are widely recognized as the dominant broadband scheme. This technology has also the potential to allow network convergence, e.g. when exploited for mobile network front/backhauling (MFH/MBH). However, hybrid solutions will most probably emerge in many cases. In this context, service convergence and unified network control and management mechanisms are also considered key enabling technologies beyond data plane integration through appropriate system interfaces.

To address the above requirements, Software Defined Networking (SDN) is a key enabler for decoupling control and data planes, allowing the former to exploit open software as a step towards orchestrating platforms with dissimilar operating systems. One such open-source protocol is OpenFlow (OF) which has been originally conceived to operate on Layer 2 (L2) switched and Layer 3 (L3) routers. In particular, in OF network nodes are represented as virtualized switches (OF switches) that exchange OF protocol messages with a centralized controller where all network control decisions are implemented as applications on top of the corresponding Network Operating System (NOS). Control and data plane separation is achieved through a well-defined Application Programming Interface (API), which is used to populate flow tables through OF, that are subsequently used for to perform look-ups when forwarding packets through the data path of the switching node.

Complementary to SDN are the developments in the field of “virtualization” a term that identifies the process of using general purpose hardware/processing resources to perform network functions and services (Network Function Virtualization –NFV). A remarkable example of NFV in the access domain is the CORD (Central Office Re-architected as Data Center) initiative [1]. CORD is aiming to virtualize existing proprietary hardware devices and to develop their software counterpart running on commodity hardware. CORD’s infrastructure is built on white boxes, ONOS (the open source NOS), OpenStack, and XOS open source orchestration. Thus, the objective of CORD is to utilize simplified GPON optical network unit (ONU) systems at user premises or G.Fast termination cabinets and optical line terminal (OLT) chipsets in the access node that provide only the minimal low-level L1/L2 GPON functionalities. All other higher layer functions are executed at commodity servers in a Data-Center (DC). A similar approach has been announced by NTT in its Flexible Access System Architecture (FASA), which aims to provide greater flexibility for fiber to fiber-to-the-home (FTTH) networks through the use of virtualized network functions (VNFs) introducing a white-box OLT.

Similar objectives to CORD, for service convergence based on SDN/NFV, are shared by HYDRA [2] which, however, follows a wider in scope approach. HYDRA is exploiting a converged heterogeneous network and computing infrastructure in a concept that is promoting a highly distributed DC architecture while it is pushing NFV closer to the end-user than CORD does, in a model inspired by fog computing. The active remote node (ARN) in [2] aggregates traffic from a number of heterogeneous access networks and bypasses the MAN segment by pure transmission, integrating in this way the Access and Core segments, which is shown to result in performance enhancements and a clear cost advantage. In HYDRA, the resources to aggregate the traffic from heterogeneous access systems and a micro-Datacentre (μ-DC) infrastructure are collocated at the ARN providing to network functions and applications/services access to a joint pool of networking, processing and storage resources minimizing latency compared to the alternative of transporting data back and forth to remote locations. A schematic illustration the ARN is given in Figure 1. 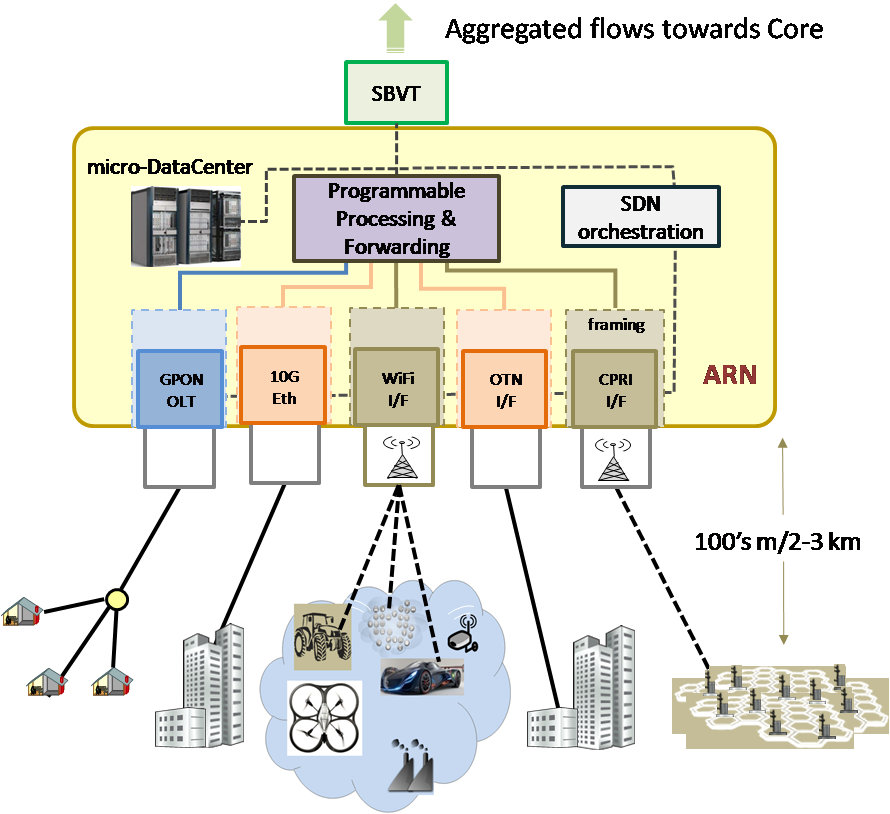 Work on SDN-based control plane for GPON access systems is still at an early stage and no interface standardization has been agreed yet. Indicatively, in [3] a high level presentation for an SDN-based control plane in access is given and in [4] an amendment to the OF protocol is proposed to integrate an OF-enabled metro and a GPON access network based on an OF controller on top of the I2RS router interface. The control plane architecture is similar to the one depicted at the upper part of Figure 2, where OF is terminated at the access concentrator and the GPON access segment is managed through the OF agent via a South-Bound Interface (SBI) to the GPON management system. A similar approach was also used in [5]. However, the proposed OF-based integration is beyond the access concentrator interface to the backhaul network, preventing the GPON access segment to be seamlessly integrated to a common SDN control plane. 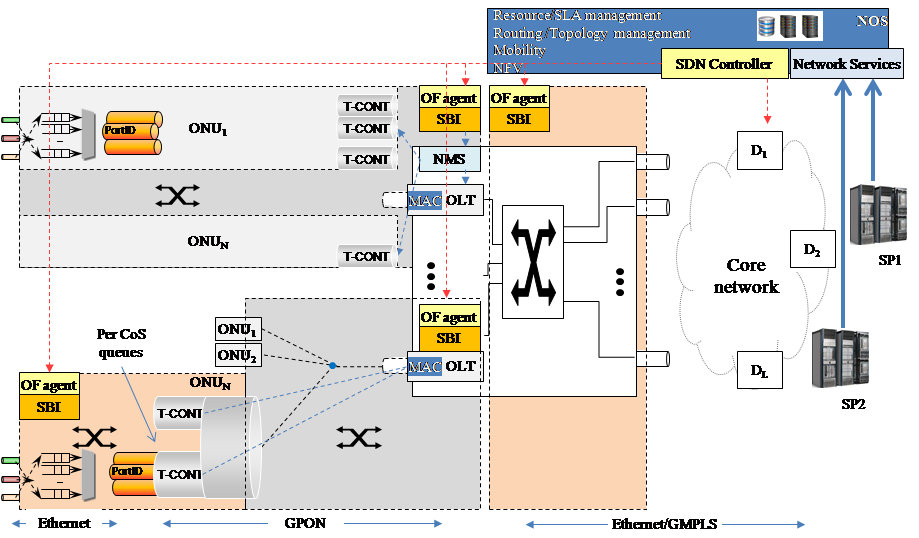 A prototype implementation based on commercial GPON access systems

As mentioned above, HYDRA is aiming to jointly orchestrate a number of heterogeneous networks is access and for this reason OF should be used without custom extensions. To do so an abstraction is necessary to hide the PON specific details, while allowing an efficient handling of its operations. For example, GPON’s Transmission Convergence (TC) layer (where QoS is managed) uses a number of internal identifiers, like Port-ID and Alloc-ID, to address logical connections and upstream T-CONT (traffic container) queues, respectively. Thus, we propose to emulate the access segment as a hierarchical switch cascade where the OLT and the ONUs associated to the same PON segment are represented as a single OF controlled switch (Figure 2).

The representation of a GPON with this switch cascade model is as follows: The traffic flows are identified as upstream (US), downstream (DS) and multicast (MC). As illustrated in Figure 2 each ONU has a number of discrete client ports that need to be mapped to internal T-CONT queues that correspond to virtual output ports with different priorities. Finally, the outputs from OLTs are interfaced to a “L2 switch” forwarding traffic either towards the Core or to the μ-DC for data processing or to initiate a data service. In DS, traffic flow matching is used to direct flows to appropriate the ONU ports, with the Port-ID allocated automatically while the US flow matching rules are applied at the client ports. Each T-CONT supported by the ONU is represented as a queue in the network port where US flows are directed, with the relevant Alloc-ID allocated automatically. Again, Port-ID can be allocated automatically when using this scheme. For MC flows, an OF group should be used of type “all” with an “action bucket” for each destination ONU.

To demonstrate the above functionality, we have developed a testbed that is based on the Alcatel-Lucent Intelligent Services Access Manager (ISAM 7330) GPON system as shown in Figure 3. Service and QoS control are initiated through a REST-based application for the communication of legacy OF Controllers (e.g. Floodlight, OpenDaylight). An Access Node Agent (ANA) communicates with the controller and automatically translates OF messages to vendor specific CLI commands.

To demonstrate the approach, a video streaming service is considered in the upstream direction. Two TCONT2 type queue profiles were used with an assured rate of 3Mb/s and 20Mb/s. The dotted rectangle in Figure 3 illustrates the PON abstraction. In this scenario a streaming video service (upstream direction) was generated using the VLC server delivering video data from PC1 (ONU1) to PC7 (Core). 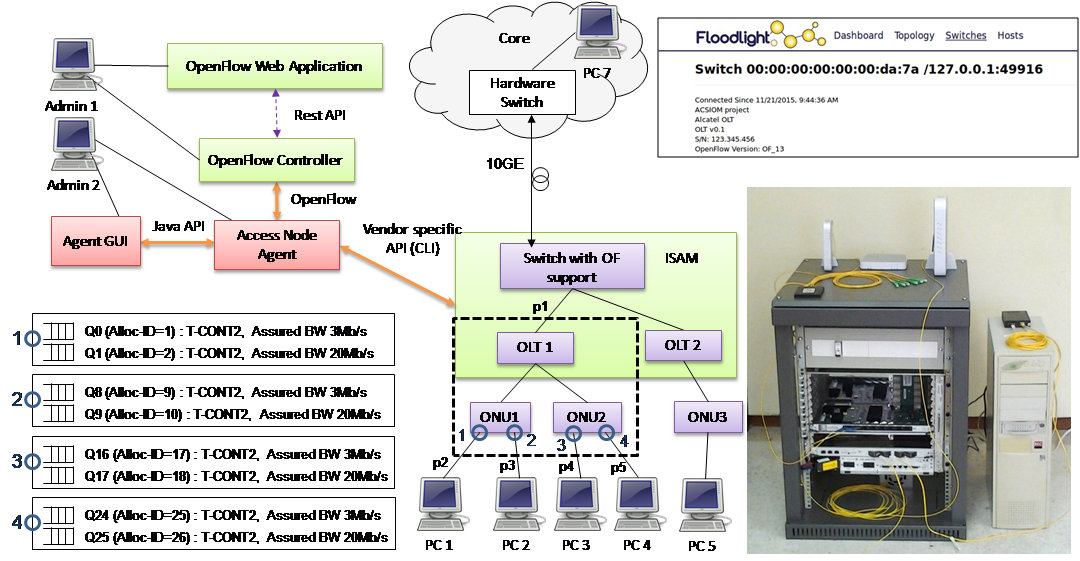 To demonstrate control of GPON’s QoS through OF in our testbed, the following operations carried out: the traffic entering the GPON network from the first port of ONU1 (p2) is initially forwarded to Q1. At this time the streaming video service facilitates the available high bandwidth and it is delivered with high QoS. Then we assumed that the operator is changing the SLA to an operational condition that equals to a lower bandwidth, so by using the OF application it changes the corresponding parameters and an OF flow modification message (OFPT_ FLOW_MOD) is delivered to the ANA from the controller. In ANA, this message is appropriately translated to CLI commands, which change the forwarding and QoS scheme of the PON network in order to accommodate the new requirements. After the automatic execution of the CLI commands the traffic entering port p2 is forwarded to Q0. This downgrade in rate for the offered service from 20 Mb/s to 3 Mb/s is observed form the user receiving the video (PC7). In PC7, a tool is monitoring the network traffic throughout the scenario execution time, the results of which are illustrated in Figure 4. 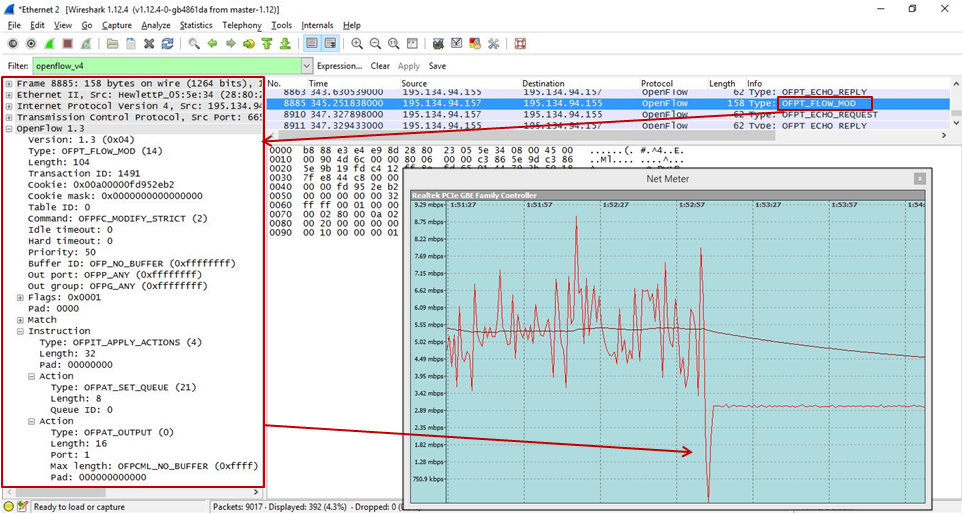 We have shown that the GPON abstraction is possible by means of a standardized OF protocol. This is an important step towards integration of heterogeneous LANs using a common SDN control plane and network operating system to jointly orchestrate network resource slicing and sharing as well as network function virtualization.

[1] “CORD: The Central Office Rearchitected as a Datacenter,” whitepaper, xosproject.org/wp-content/uploads/2015/04/Whitepaper-CORD.pdf

Chris Matrakidis has an Electrical Engineering degree from the University of Patras and a PhD from University College London, UK in the field of digital communications. His primary research interests are in the areas of simulation and optimisation of communication systems. He has extensively worked on the applications of coding theory, GSM systems and optical networking, satellite communications. He is author or co-author of several journal and conference publications and he in several EU-funded and natioanl projects with emphasis on optical networking.

Evangelos Kosmatos received Dipl.Ing. and Ph.D. degrees, both in electrical and computer engineering, from the National Technical University of Athens (NTUA), Greece, in 2002 and 2007, respectively. His research interests lie in the area of network control plane design, resource allocation in broadband networks, intelligent multimedia content delivery, and optical/wireless network integration. He has participated in several EU and national research projects in the above areas.

Theofanis Orphanoudakis received his Dipl.Ing. and Ph.D. degrees, both in electrical and computer engineering, from NTUA in 1995 and 1998, respectively. Currently he is an assistant professor at the Hellenic Open University. He has participated in several EU research programs, and has led projects in the areas of broadband networking components and highspeed core and access networks. He is a Senior Member of the Technical Chamber of Greece.

Alexandros Stavdas holds a B.Sc. degree in Physics from the University of Athens (Greece), M.Sc. in Optoelectronics and Laser Devices from Heriot-Watt /St. Andrews University (U.K.), and Ph.D. from University College London (U.K). Currently, he is Full Professor and Director of Optical Systems and Networks Laboratory in the Department of Informatics and Telecommunications, University of Peloponnese. He is an author of over 150 journal and conference papers. He has also served as the Technical Program Committee Chairman and a Member of the Technical Program Committees in several International Conferences.

Eliezer Dekel is an IBM Senior Technical Staff Member and Chief Architect for Distributed Systems in IBM Research - Haifa. In his current role he focuses on developing infrastructure technologies for very large scale distributed systems. Eliezer Dekel is a steering board member of the European Alliance for Innovations (EAI). He is the editor in chief of The EAI Endorsed Transactions on Cloud Systems, and an associate editor of ACM Computing Surveys. Dr. Dekel served on numerous conferences program committees and organized, or served as chair in some of them. Since joining the Haifa Research Lab in 1992, he has been involved in research in the areas of distributed and fault-tolerant computing, software defined systems, service-oriented technology, and software engineering. He is currently working on technologies for providing Quality of Service, with a focus on dependability, in very large scale multi-tier and multi-layered environments. For this area he initiated together with colleagues the very successful International Workshop on Large Scale Distributed Systems and Middleware (LADIS), now sponsored by ACM. This workshop was one of the first workshops to focus on the foundations of "cloud computing." Eliezer is also involved in several EU FP7 ICT funded projects.