Telecom Networks used to be rather static, hierarchical and with siloes: a fixed-broadband network with DSLAM (Digital Subscriber Line Access Multiplexer) and home CPE (Customer Premise Equipment) as leaves or a mobile network with a Core Network and base stations as leaves. With the move to softwarization and more dynamic allocation of resources on demand, for new services or to expand capacity, network topology tends to evolve more often. With 5G [11], this granularity and complexity of the network is exploding in terms of new resource types, service types, policies, access rights, instances and frequency of the changes. To keep up with this transformation and prevent manual errors, more and more automation is introduced in the network operations with an ultimate goal to become ‘zero touch’ as discussed in ETSI ZSM (Zero Touch Service Management) [8]. 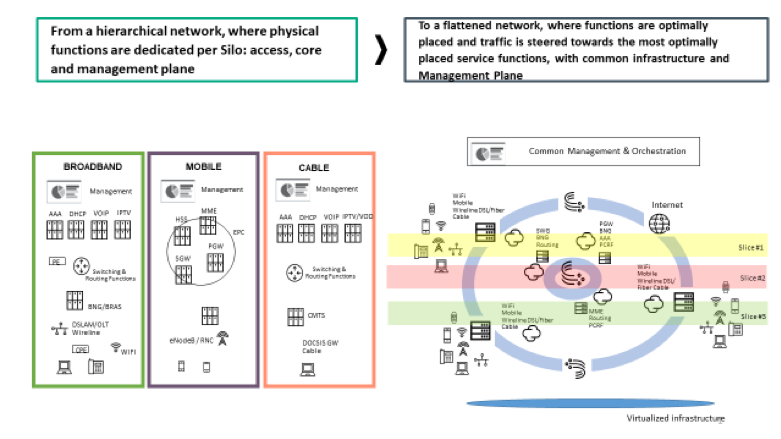 As an example, dynamicity becomes a challenge when looking how traditional management systems operate networks today. They collect alarms from the different components of the network and map these alarms to a hierarchical model with Central and Regional Data Centers, and dedicated hardware systems. If resources start to be deployed dynamically and assigned to existing or new services dynamically, Root-Cause-Analysis needs to keep track of where and how resources and services are at a given time.

With NFV (Network Function Virtualization) [3] which is a big trend in telecom networks and a first step towards 5G architecture with stateless functions and Service Based Architecture (SBA), a number of paradigms are changing dramatically:

With 5G, existing Network Functions (NF) are redesigned, decomposed, with some common enablers shared across different functions. Network Service (NS) instances are now composable of these new software functions changing dynamically, being re-configured and re-chained on the fly, thus increasing the complexity of managing these functions. At the same time, network function features will be deployed in short intervals. Hence, the orchestration of the service instances as well as their service development lifecycle will change continuously. Our classic OSS (Operation Support Systems) approaches are not made for this agility and do not fit these needs anymore.

Intent based is not a new concept. HP introduced and made early contributions back in 2015 on Intent for SDN at the Open Networking Foundation (ONF), which translated into Intent Based Northbound (NBI) API specification [4]. The message was “Don’t tell me what to do. Tell me what you want”. ONF Intent for network control APIs was largely adopted in the industry as described in a 2016 IEEE SDN article [5]. We also introduced the same concept in ETSI NFV not only for SDN or network resource orchestration [6] but suggested to investigate for other NFV interfaces [7], being overall Resource Orchestration (Compute, Network, Storage) but also Network Orchestration.

With Service Orchestration sitting on top of Network Orchestration same principle can now be applied to this layer and embrace other technologies that somewhat expand from the initial ETSI NFV architecture to a set of layers as described in Figure 2. 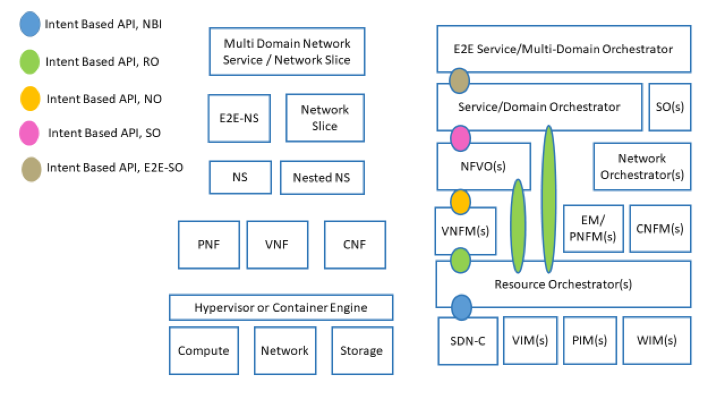 Figure 2 – Intent based API across the full stack, up to Service Orchestration

As a consequence of using an intent-based API, a mapping is required between the intent (what you want) and the request to the underlying layers (what to do). In traditional more static networks, this mapping could also be static and follow the hierarchical model of the topology and resource-network-service relatively static mapping. But in an environment where Service Orchestration sits on top of NFV and SDN, with more dynamic networks, new thinking about intent-based modelling is required. It differs from classic information modeling as defined by TMF (Tele-Management Forum) with CFS/RFS (Customer Facing Service/Resource Facing Service) hierarchies [8].

Looking at future network services or even slicing, we may want to compose networks from one or multiple subdomains or operators, and mix Physical Network Functions (PNF) or Virtual Network Functions (VNF or CNF-container based functions). A main benefit of an intent-based model is that changes in the underlying infrastructure do not directly impact the model. Intent is invariant and portable. For instance, if a given function is moving from being physical to virtual, or to a different location, the overall Network Service (NS) intent model remains the same, but the interpretation of the model would translate the request (per policy) from being sent to a PNF management function to a VNF or CNF management function. Similarly, the northbound API would not change.

Intent-based modelling also contains the behavior needed to build the service by composing subordinated services and underlying software functions (micro-services). These policies enable a generic intelligent engine to interpret the need at runtime. There is no workflow anymore. Thanks to the intent model, and the current state of instances, the engine always finds a consistent state.

The model description must capture the entire semantics of the model, not just the data structure. We can call it the reason behind the model. If the reason is not expressed, the “intelligent” engine would not be able to build the prescription and hence unable to adapt the system to the new situation. To gain flexibility with changing situations (e.g. service variants or component status), it is important to express the policies taking a current context or status into account, within the service model description.

To support Intent Based Modeling, a new concept of Dynamic Service Descriptors (DSD) is introduced. DSD declare the service Objects, their Relationship and behavior Policies, all dynamic.

At runtime, each service instance has a well-defined status. Transition of the status can be associated to a concrete action request coming from another management system.

With intent based modelling and declarative service descriptors (such as DSD), it is possible to build a generic engine, which generates and orchestrates actions to change the service’s state, when requested by another system, such as order management or automatically thanks to some AI (Artificial Intelligence) system.

Cognitive functions allow to detect problems in a probabilistic approach or add value by optimizing infrastructure capacity use. This leads to Zero Touch Service Management (ZSM).

The concepts described in this paper are being implemented [9] and contributed to ETSI ZSM [10] [11].

Andreas Krichel is Chief Architect for Orchestration in the Global OSS Solutioning team within HPE’s Communications & Media Solutions Business Unit. He shaped HPE’s Service Director product for intent based service orchestration including closed loop, based on HPE’s intent based service modelling with a generic engine. Andreas consults and proposes solutions to manage today’s and future services based on 5G Networks, Slicing, Edge, based on NFV/SDN or hybrid for Enterprise and Consumer Services. His track record for OSS solutions and architectures started 1994, it includes presentations and demos at various industry events. Andreas contributes actively to ETSI ZSM driving zero-touch operations with a focus on intent based service orchestration.

Syed Hassan Ahmed (S'13, M'17, SM'18) is an Assistant Professor in the Department of Computer Science at Georgia Southern University1, Statesboro Campus, USA. Previously, he was a Post-Doctoral Fellow in the Department of Electrical and Computer Engineering, University of Central Florida, Orlando, USA. He completed his Bachelors in Computer Science from Kohat University of Science & Technology (KUST), Pakistan and Master combined Ph.D. Degree from School of Computer Science and Engineering (SCSE), Kyungpook National University (KNU), Republic of Korea (South Korea). In summer 2015, he was also a visiting researcher at the Georgia Tech, Atlanta, USA. Collectively, he has authored/co-authored over 130 international publications including Journal articles, Conference Proceedings, Book Chapters, and 03 books. In 2016, his work on robust content retrieval in future vehicular networks lead him to win the Qualcomm Innovation Award at KNU, Korea. Dr. Hassan's research interests include Sensor and Ad hoc Networks, Cyber-Physical Systems, Vehicular Communications, and Future Internet. He is currently the Member of Board of Governors and IEEE VTS liaison to IEEE Young Professionals society.