SDN and NFV Evolution Towards 5G

SDN and NFV have now been around for some years with an uptake in telecom network a bit slower than expected but these technologies are definitely shaping 5G as initiated by NGMN [1].
This article will highlight the relationships between SDN, NFV and 5G networks.

Standards have this reputation of being slow but standards are still the only way the telecom industry knows to guarantee interoperability, free enterprise and sustainable business to guarantee secured, open, reliable and continuously innovative worldwide communications. 3GPP, that has been shaping mobile telecom networks for years now, is no exception with its three stages approach of requirements, architecture and protocols!

Yet, in June 2017 a number of operators eager to experiment 5G new radio technologies have convinced 3GPP RAN to accelerate and ‘simplify’ the roadmap to issue a first phase a bit ahead of schedule. They agreed on a non-standalone option that will connect the new radio to an LTE network. Then, issue the second phase with standalone 5G.

In the meantime, actors in Asia, and KT in particular, has issued its own specifications to be ready for the Olympics in Korea in 2018, bringing live experience, then influence the 3GPP standard specifications and  re-align to the common standard.

Below timeline provides an overview of 5G milestones:

If we look into the initial specifications that have been published, and primarily the architecture specifications 3PP TS 23.501 [10], we discover a clear split between user plane and control plane following the SDN concepts, and consequently a number of new network elements, with new reference points and new interfaces. The requirements such as IoT or ultra low latency for instance are also driving the need for enhanced or new protocols. 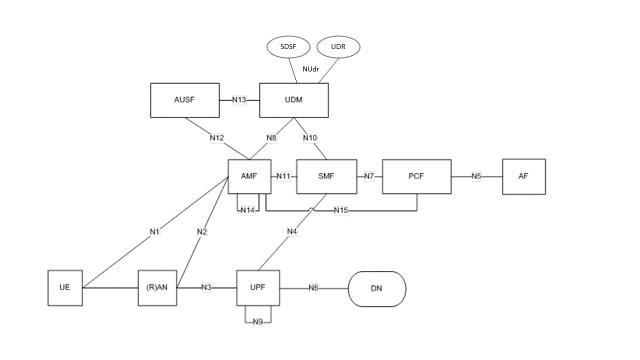 Clearly from the list above, we identify a number of network elements that are a smooth evolution from LTE, ie PCRF becoming PCF, while for others the evolution is a major impact: typically for SP-GW being split in UPF for the user plane and SMF for the control plane. Similarly the AAA-HSS evolution to AUSF-UDM and storage with SDSF and UDR. More generally speaking we are moving to a Service Based Architecture, more and more IT like, and more and more stateless functions with state and other data being stored in separate components and shared data layer. As 3GPP Release 15 progresses into Stage 3, more details will be provided and of course Release 16 will even refine further for 5G Standalone.

3GPP SA5, the group that is defining the management of 3GPP networks, has been working with ETSI NFV for some years now, actually starting in Release 13 with 3GPP TR 23.842 [3]. Figure 3 below, where 3GPP defines on the left hand side the Network Element (NE) that are not virtualized (PNF – Physical Network Function), the ones that are virtualized (VNF – Virtual Network Function) as defined by ETSI, the traditional vendor Element Manager (EM) which actually tend to disappear with NFV and DevOps but are still there in the picture or embedded in VNF, interfacing with the Network Management (NM) layer sitting in the OSS. On the right hand side, the NFV MANO (Management and Orchestration) as defined by ETSI NFV, that manages the virtualized infrastructure, the virtualized network functions (VNF) and the network services (NS) that span across VNF and PNF. So besides adopting NFV MANO, NFVI and VNF, 3GPP is also adopting the Os-Ma-Nfvo interface with the 3GPP NM-OSS and the Ve-Vnfm-em interface with the 3GPP PNF-EM. 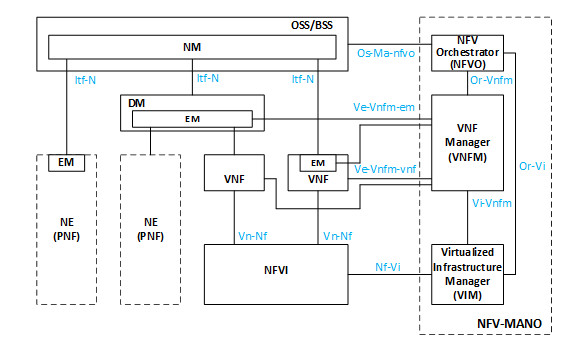 In parallel, ETSI NFV is expanding its work in ETSI NFV Release 3 to explore and address some of the 5G new use cases and requirements, as described by the ETSI NFV. This includes work items on Network Slicing that I personally initiated (NFV-EVE012) but also other topics such as Cloud Native addressing containers (NFV-EVE011), Real time management (NFV-IFA025), but also Policy Management (NFV-IFA023), in line with the recent ETSI ISG ENI [14].

In line with previous work from IETF or ONF and projects experimenting SDN use cases or SGI-Lan service chaining, 3GPP has introduced EPC Control Plane-User Plane Separation (CUPS) in Release 14.  Typically for SGW, PGW and TDF, three new interfaces were defined: Sxa, Sxb and Sxc in TS 23.214 [5] as illustrated in Figure 4. 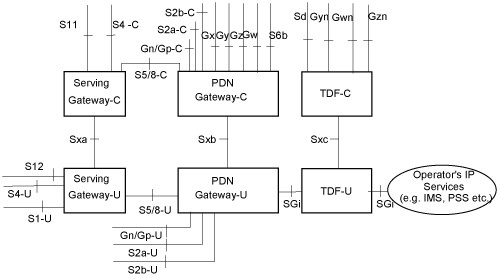 Then in June 2017, 3GPP selected a new protocol between these control plane and user plane layers: PFCP, Packet Forwarding Control Plane, as shown in Figure 5.

While lots of work had been done in the research and industry community using Openflow and SDN controller to configure EPC user plane, 3GPP study compared a few protocols, including Forces, Openflow, GTP and Diameter against the requirements for 5G and concluded that gaps were too important and most effective was to define a new protocol, using UDP and managing Sx node procedure as well as Sx session procedures. 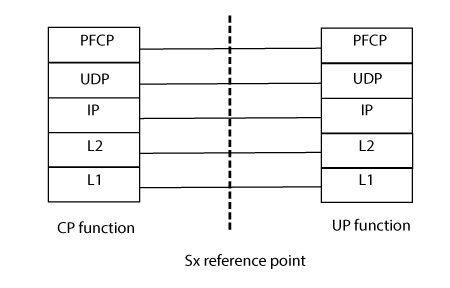 Network Slicing Use Case and 5G

The network slicing concept has been introduced several years ago by NGMN 5G white paper [1]: “A network slice, namely “5G slice”, supports the communication service of a particular connection type with a specific way of handling the C- and U-plane for this service. To this end, a 5G slice is composed of a collection of 5G network functions and specific RAT settings that are combined together for the specific use case or business model”. NGMN then refined in their dedicated paper on network slicing [2] with a definition that set the stage for further work in the industry: “Network Slice Instance: a set of network functions, and resources to run these network functions, forming a complete instantiated logical network to meet certain network characteristics required by the Service Instance(s)”. At this stage, some of the key principles were set such as end to end network slice and logical instance associated to a service. To be pragmatic this slice could combine a set of virtualized and non-virtualized functions.

Then ONF explained how to define and manage network slices [15] with SDN as described in Figure 6. 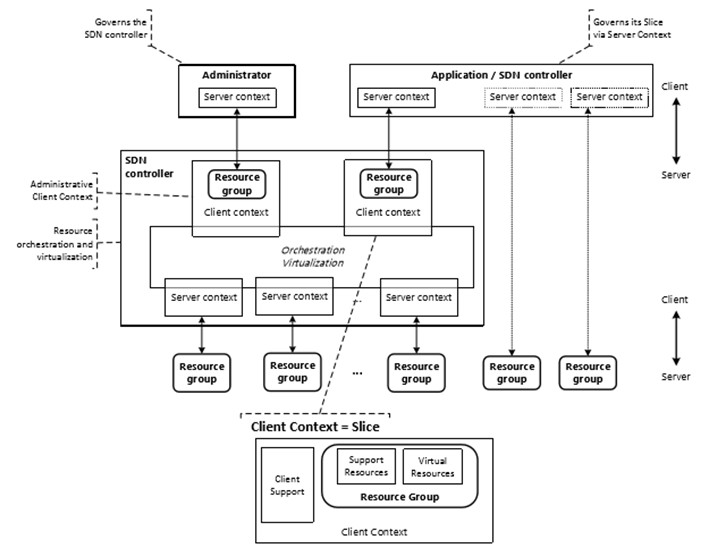 Lately 3GPP embraced the concept in TS 23.799 [9] and is now studying the management and orchestration of slices in TR28.801 [11], with a CSP (Communication Service Provider) invoking a Communication Service that ‘uses’ a NOP (Network Operator) Network Slice. This Network Slice ‘contains’ Network Slice Subnets which contains Network Functions (virtualized or not …). These Network Functions are from Access and Core Network. However 3GPP has not defined yet the mapping between Network Slice or Subnet and ETSI NFV Network Services, but others have suggestions. In the 5G America’s paper on Network Slicing [19] that I co-authored, we agreed that network slices would invoke ETSI NFV network services via NFV MANO, and several 5G-PPP projects took the same path.

In parallel and fueling the standard work, many projects and initiatives also tackle the 5G topic and study the leverage of SDN and NFV technology to deliver next generation networks. I have picked a few examples in this article that illustrate different scenarios.

The European 5G Public Private Partnership (EU 5G PPP) which is sponsored by the European Commission has a series of projects with currently two running phases: a phase 1 which is nearly completed and a phase 2 that is just started. Among those, the 5G-Ex project [16] where HPE is participating along with Orange, Telefonica, and other ICT actors, is studying next generation networks and management aspects, including virtualization, SDN, slicing, and multi-domain, multi-operator domains. 5G-Ex is typically defining inter-operator interfaces for slice and resource management for more and more dynamic and automated network environments. 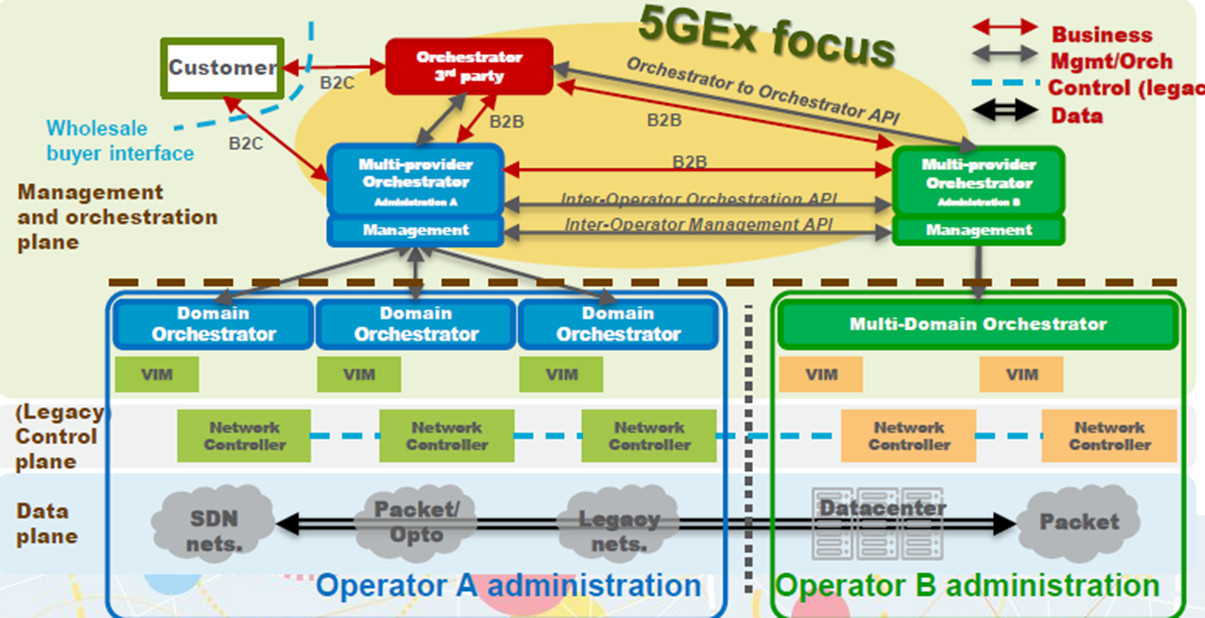 Another interesting project is 5G Lab Germany [18] which is exploring network coding for 5G radio and SDN as well as Edge IoT use cases for connected cars and robots, addressing the requirements of 5G ultra low latency and tactile internet. This collaboration of industry players with academic research is the secret sauce to break through on some of these complex topics which involve high performance hardware, very flexible architecture and efficient software. 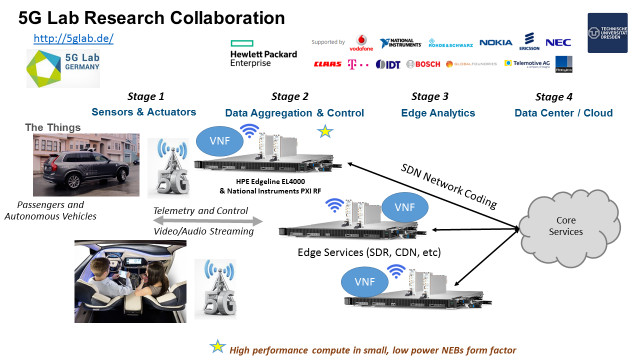 Overall, a lot of things are going on, too many things probably for an industry that is transforming rapidly with challenging revenue models, shrinking resources to contribute, align and implement something that will work! but lots of new opportunities coming with 5G and beyond the pure 3GPP-5G as it is shaping now. BBF (Broadband Forum) is building its own 5G roadmap with lots of SDN and NFV very likely and will align with 3GPP as shown below in Figure 9 to deliver 5G Fixe Mobile Convergence (FMC) by 2020. So more changes to come in an ever innovating world! 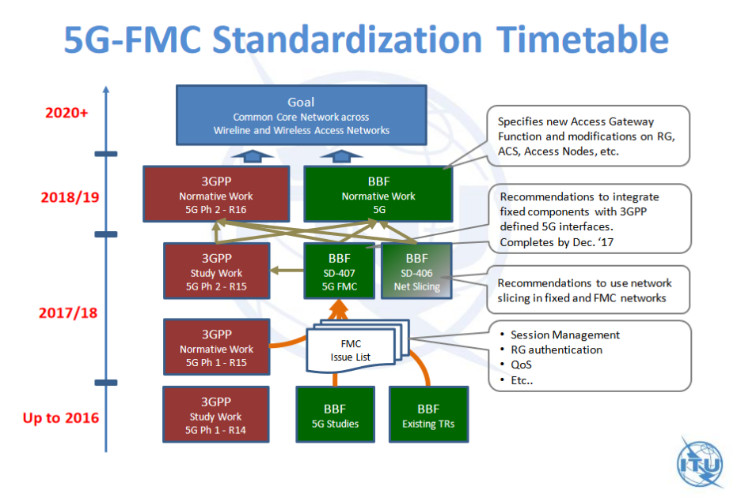