Software Defined Networking (SDN) and Network Functions Virtualization (NFV) are being increasingly applied to a variety of communication networks including mobile and computer networks. The key characteristics of SDN and NFV are modularization of hardware and software, virtualization at all levels of network, multi-tenancy via supporting multi user control of resource and provision of strong isolation of control, and centralization of control and programmability.

A key question remains - How does software defined and virtualized networks provide a paradigm shift in the way application and services are designed and interact with these networks? There is a need to evaluate impact on end users, network and service providers.

“Next Generation Service Overlay Networks (NGSON)” is an effort to standardize a service ecosystem for the benefit of network operators, service and content providers, and end users. Protocols are being developed for service composition [1], content delivery [2] and self-organizing management [3].

A reference framework of IP-based service overlay networks for collaborative and customer-centric service delivery has already been standardized [4]. It includes context aware, dynamically adaptive, and self-organizing network capabilities such as advanced routing and forwarding schemes.

The below figure provides an illustration of an offered service model of NGSON. 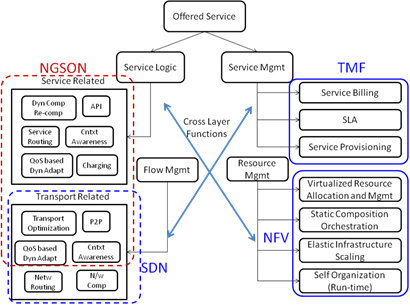 NGSON also aims to accelerate the proliferation of SDN services and applications and to offer a more efficient way of providing them through a service architecture ecosystem of one-stop shopping for service specific challenges.

It is well known that lack of quality modeling (security, performance, reliability) increases Capital Expenses (CAPEX) as well as Operational Expenses (OPEX) of the networks. There are several motivations from the perspective of quality which require standards development such as security and performance degradation for services delivered over SDN/NFV, creation of outage database, identification of level of resilience/service quality, identification of Key Performance Indicators (KPIs), cross layer optimizations, reliability models/schemes, Quality of Service (QoS) and impact of Service Level Agreements (SLAs), Quality of Experience (QoE), language for service reliability and mapping to SDN/NFV KPIs.

“Security for Virtualized Environments” [5] is an effort to standardize security models, terminology, and analytics, essential components of SDN/NFV environments to ensure confidentiality, integrity and availability.

“Performance for Virtualized Environments” [6] is an effort to standardize performance models, terminology, and analytics to enable optimized system operations and service delivery in SDN/NFV infrastructures.

“Reliability for Virtualized Environments” [7] is an effort to standardize reliability models, terminology, and analytics to enable optimized system operations and service delivery in SDN/NFV infrastructures.

The purpose of this project is to define a classical interface to quantum communication devices that permits these devices to be reconfigured to implement a variety of protocols and measurements [8]. This interface will enable configuration of quantum endpoints in a communication network in order to dynamically create, modify, or remove quantum protocols or applications. The protocol design will facilitate future integration with Software-Defined Networking and Open Networking Foundation OpenFlow.

[4] 1903-2011 - IEEE Standard for the Functional Architecture of Next Generation Service Overlay Networks, http://standards.ieee.org/findstds/standard/1903-2011.html

Niranth Amogh (namogh@huawei.com) is a Principal Researcher at the Huawei India R&D Center at Bangalore. He is responsible for the Wireless Networks Research within the organization. His research areas include Broadband Critical Communications, M2M/IoT, SDN/NFV and NGSON. He has filed several patents in his research areas and holds leadership positions in several SDOs in India and globally. He is an alumnus of BITS, Pilani and NIE, Mysore.

Mehmet Ulema (mehmet.ulema@manhattan.edu) is a professor at the Computer Information Systems at Manhattan College, New York. Previously, he was with AT&T Bell Laboratories, Bellcore, Daewoo Telecom, and Hazeltine. He also serves as the Director of Standards Development in ComSoc. He was the TPC Chair of GLOBECOM 2009, General Co-chair of NOMS 2016. He is on the editorial board of IEEE Journal of IoT, and Springer Journal of Network and Services Management. He received PhD at Polytechnic University, Brooklyn and BS & MS at Istanbul Technical University.