"Several Artificial Intelligent (A.I.) Experts and Neuroscientists are arguing that humans brains can likely be modeled as computational systems capable of encoding and processing information in very specific ways. Out of this non-conventional computing, mind is likely to emerge from the body (not just from the brain, I would argue). This is like saying that when our body lives and thinks, it is continuously creating “informational structures” which are at the very basis of our daily behaviors. And consciousness comes from the correlation, integration of such “informational structures” or encoded pieces of information."

Read more at The Fast Mode

Thanks to software-defined radios, rural communities in Oaxaca, Mexico have been building their own cellular networks with open-source software that is able to take over functions that once required hardware. 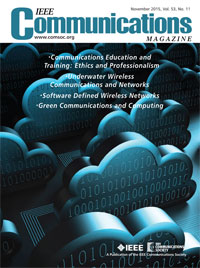 One of the feature topics in the November 2015 issue of IEEE Communications Magazine is Software Defined Wireless Networks (SDWN), a cost-effective and adaptable solution to meet the increasing demand for dynamic services from wireless networks.

5G is on the horizon. Learn about the proposed technologies behind 5G, how they will advance telecommunications infrastructures, and current efforts to define this next-generation mobile standard.

5G and the Next Billion Mobile Users: A View from India
IEEE ComSoc Technology News - October 2015

In this issue of the IEEE ComSoc Technology News, Editor-in-Chief Alan Gatherer continues to lead the theme of 5G and social justice by inviting a special guest Chaitali Sengupta, VP Product Development and Engineering at Reliance Jio Infocomm Ltd., for a view from India on how emerging wireless communities may drive 5G development.

This paper addresses SDN scalability and performance issues in the context of 5G mobile networks by introducing a novel SDN/OpenFlow-based architecture and control plane framework tailored for mobile cloud computing-based systems and Follow-me cloud-based systems where mobile nodes and network services are subject to constraints of movements and migrations. 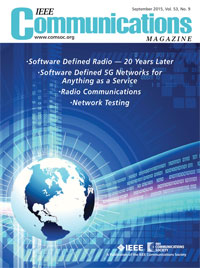 5G will become the expression of the technical and economic maturity of a number of trends driving network softwarization says Antonio Manzalini, Steering Committee Chair of the IEEE SDN initiative. It is in this perspective that Antonio and other colleagues guest edited a feature topic on software-defined 5G networks for anything as a service in the September 2015 issue of the IEEE Communications Magazine. 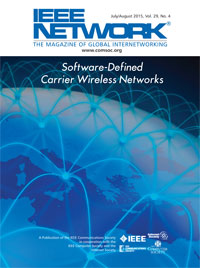 The July/August 2015 issue of IEEE Network presents an in-depth look at the radically new software defined carrier wireless networks (SD-CWN). Articles in this issue include a survey on the concept of SDN and wireless network virtualization for SD-CWN plus studies on the architecture and technical issues of SD-CWN.

"The Joint Coordination Activity on Software-Defined Networking (JCA-SDN), was approved by ITU-T TSAG in June 2013. Mr. Takashi Egawa (NEC, Japan) was appointed as the Chairman and Ms Ying Cheng (China Unicom, China) as the vice chair of JCA-SDN, which will report its progress to TSAG."

This paper reviews the current state of the art in reconfigurable network systems, covering hardware reconfiguration and its interplay with software-defined networking (SDN).

Read more in Proceedings of the IEEE (PDF, 1 MB)

In the near future, drastic improvements need to be made in cellular network architecture to address increasing capacity of mobile connections and exponential growth in network traffic. This paper presents a view on the future of wireless communication for 2020 and beyond, including results of a detailed survey on 5G cellular network architecture and some of the key emerging technologies that are helpful in improving the architecture and meeting the demands of users.

Reshaping the future with NFV and SDN
Bell Labs - May 2015

The impact of new technologies on carriers and their networks

"When 5G, the fifth generation of wireless communications technology, arrives in 2020, engineers expect that it will be able to handle about 1000 times more mobile data than today's cellular systems. It will also become the backbone of the Internet of Things (IoT), linking up fixed and mobile devices--vending machines and cars alike--becoming part of a new industrial and economic revolution, some say."

A Universal Platform for Softwarization
IEEE SDN Blog - May 2015

"There are a lot of reference architectures looking for the Softwarization of Telecommunications infrastructures. In my opinion too many, given that in the medium-long term will make no sense distinguishing SDN, NFV...and related declinations."

Read more at The Register

Get Ready for SDN, NFV, and Softwarization
Electronic Design - April 2015

"Do you know what softwarization is and its two main versions, SDN and NFV? If you do, congrats on keeping up with the technology. You are probably a network engineer or a technical IT person. From what I can see, the average EE doesn’t know squat about these things. But since most communications is networked these days, it is a good idea to become familiar with the trend that portends what all future networks will look like. The cloud, big data, mobilization, and the virtualization of servers are gradually changing how networks are built and managed, hopefully for the better."

The transition to 5G telecommunications networks, coupled with the flexibility of cloud orchestration, will enable self-driving vehicles.

How softwarization will affect the Internet of Things
ECN - March 2015

While Software-Defined Networking (SDN) and Network Function Virtualization (NFV) are mutually beneficial, they are not dependent on each other. Network functions can be virtualized and deployed without an SDN being required and vice-versa. But both can be seen as expressions of a systemic "softwarization" trend that is not only impacting telecom but other Industries as well.

How Do You Keep Pace With a 100,000 Percent Increase in Wireless Data Traffic? Software
AT&T Innovation Space Blog - March 2015

"We've been able to keep up with the increase by using more and more sophisticated, complex routers, switches and other gear. But this just isn't feasible for much longer. It's too slow, too inefficient and too expensive..."

"Softwarization" is a global trend appearing under the form of several technologies and models, such as Cloud Computing, Edge-Fog Computing, SDN, NFV..., sharing the same common denominator: "functions and services can be executed as applications onto logical resources dynamically in (low cost) distributed hardware".

As we enter the 15th year of the twenty first century, what are the emerging communications technologies that will be hitting the news headlines, and what trends will be at the top of research and development agendas in industry and academia?