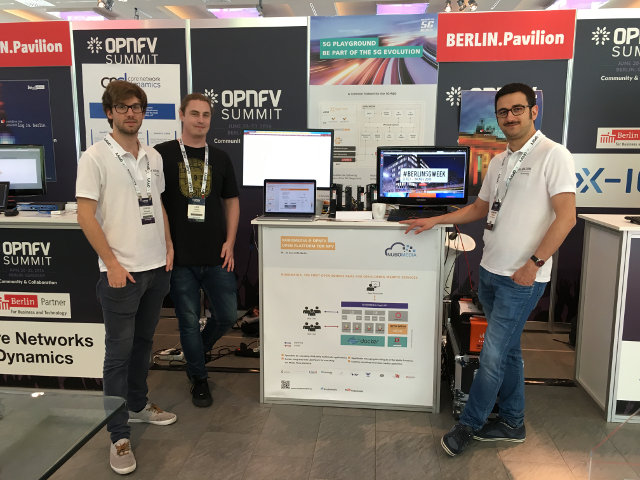 The 2nd OPNFV Summit, June 20-23 in Berlin, Germany, was a great success with 620 people in attendance from the NFV ecosystem. 300 attendees joined for the Design Summit that included events with ARM NFV Ecosystem, FD.io/DPDK, ONOS + CORD, ONF, OPEN-O and OpenDaylight.

During these days there were several interesting discussions on the upcoming projects and research items in NFV and SDN. This year is considered the Orchestration year, where many interesting projects around ETSI MANO have been launched by different organizations. This is generating discussions and debates in the international communities. It is still unclear if/what will be a convergence towards a common information/data modeling of virtualized network functions and services. The initiative has been represented by Prof. Thomas Magedanz who gave an interesting presentation about the Open Baton project and its important role in the emerging federated SDN testbeds. Considering the fragmentation of the current ecosystem, it is rather important to have solutions which are easily extensible and flexible enough to accommodate several use cases. Open Baton, with its second release is modeled around an event-driven architecture; it provides several mechanisms for supporting different use cases. The upcoming integration with the ONOS platform will allow the instantiation of end-to-end virtual networks for the initial prototypes of network slicing concepts.

For a recap of the 2nd OPNFV Summit, visit: https://www.opnfv.org/opnfv-summit-2016-event-recap