The recent innovations brought about by network “softwarization” paradigms, such as Network Function Virtualization (NFV) and Software Defined Networking (SDN), foster flexible and cost-effective service provisioning by taking advantage of vendor-independent hardware platforms as well as fully programmable network infrastructures via standardized, open, southbound interfaces (SBIs). End-to-end services provided to customers are typically delivered across different network administrative and/or technological domains, making it a challenging task and, at the same time, an opportunity when SDN/NFV solutions are adopted, because of the more advanced control features offered by such new paradigms. In particular, a very critical aspect to be dealt with is how to achieve unified management and orchestration of end-to-end services across multiple domains. To this purpose, an open, vendor-agnostic, and interoperable northbound interface (NBI) should be defined, through which applications are allowed to control the underlying heterogeneous NFV and SDN infrastructures and take advantage of dynamic service chaining.

Although a standard NBI definition is not available yet, a commonly accepted approach is to adopt a so-called “intent-based” interface that allows to declare high-level service policies rather than specify detailed networking mechanisms. In fact, the powerful abstraction level offered by an intent-based NBI would allow to specify end-to-end service composition policies by taking advantage of some kind of formalism that is close to the customer’s natural language. We believe that this approach is one of the best candidate solutions to solve the issue of management and orchestration of heterogeneous SDN/NFV domains.

In  our paper presented at NetSoft 2017 [NetSoft 2017], we first introduce a reference network architecture suitable for orchestrating end-to-end service chains deployed across heterogeneous SDN/NFV domains. Then, we define a related high-level, vendor-agnostic, intent-based NBI. We demonstrate the feasibility of the proposed approach through proof-of-concept implementation and experimental validation, considering the use case of an Internet of Things (IoT) infrastructure deployment and the corresponding cloud-based data collection, processing, and publishing services with quality of service (QoS) differentiation.

The reference multi-domain SDN/NFV architecture considered in this paper is shown in Fig. 1, including a software-defined IoT domain and a wired SDN infrastructure to reach a cloud computing domain. Data collected from sensors and actuator devices installed in the IoT domain are dispatched across the SDN domain toward a set of suitable consumers, implemented by means of virtual network functions (VNFs) and deployed within the cloud domain. Although the reference architecture in Fig. 1 is specialized for the use case assumed here, our approach to intent-based orchestration could be generalized to any SDN/NFV technology domain.. Considering the nature of the end-to-end service orchestration features we are interested in, our reference architecture is inspired by the ETSI NFV specifications, with particular reference to the Management and Orchestration (MANO) framework. The rationale behind this choice is that, on one hand, the proposed architecture has the advantage of being consistent with the most relevant NFV standard initiative to date; on the other hand, the architecture itself can be seamlessly extended to include any further SDN/NFV domain and technology as part of the underlying virtualized infrastructure. 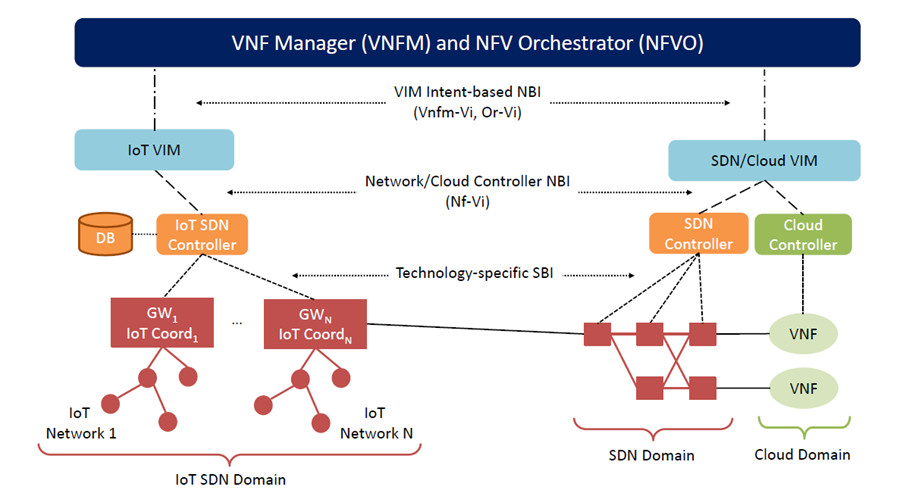 Each SDN/NFV domain in Fig. 1 consists of a technology-specific infrastructure, including:

The overarching VNF Manager (VNFM) and NFV Orchestrator (NFVO) components are responsible for consistently programming the underlying SDN/NFV domains by means of the proposed intent-based NBI. While technology- and domain-specific NBIs and SBIs are used inside each domain to efficiently control and manage the relevant components, the design of the overarching VNFM and NFVO should be as technology-agnostic as possible, so that a service chain to be deployed can be specified by a customer using a high-level, intent-based description of the service itself. This would also allow the proposed architecture to be more general and capable of being extended to different SDN technologies and domains.

To reach this goal, each domain is required to expose general abstractions and capabilities according to the reference NBI, and map them into technology-specific resources and control mechanisms. We argue that the act of decoupling service abstractions from the underlying technology should be performed mainly by the VIM, as we consider it the most appropriate component where high-level management and domain-specific control can co-exist. Therefore, we extend the concept of interactions based on vendor-agnostic intents to the NBI offered by the VIM. This approach could also allow different administrative domains to expose only service abstractions via the VIM, without disclosing sensitive details related to the underlying infrastructures. 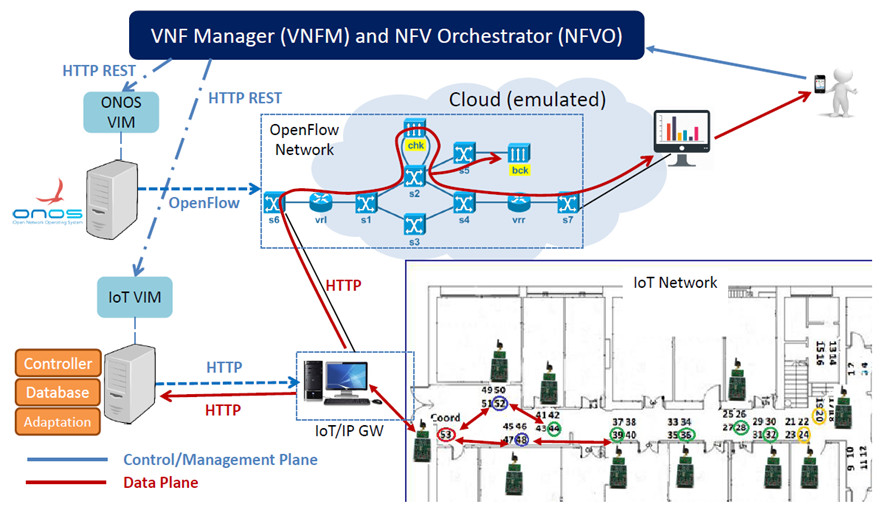 As a demonstration of the feasibility of the multi-domain SDN/NFV management and orchestration solution proposed here, we developed a test bed to implement the reference architecture illustrated in Fig. 1 of the cloud-based IoT data collection service with quality differentiation. Both IoT and cloud network infrastructures are based on specific SDN solutions. The former adopts a centralized path computation mechanism that allows to program the forwarding functions of each IoT device, whereas the latter is based on OpenFlow-capable switches controlled by the ONOS framework. The complete test bed setup is shown in Fig. 2.

The customer on the top-right corner requests the service to the high-level management and orchestration functions, specifying the desired QoS feature. The orchestrator then forwards the request to the VIM REST NBIs of the relevant domains, according to the JSON format specified in our paper [NetSoft 2017]. Each VIM performs the operations required in the respective domain and programs the underlying controllers according to the requested service and QoS feature. Data generated by the IoT devices are sent by the relevant gateway via HTTP POST to the collecting/processing/publishing server in the cloud, where the customer can retrieve it.

The latency values measured at both data and control/management planes allowed us to get a first insight to the performance levels of the overall system, resulting in reasonable response times for service setup and QoS requirement satisfaction. Scalability tests on the ONOS-based VIM also gave promising results. The use case reported here represents a working example of a more general approach to properly define high-level interfaces and develop the related control and management components to unify orchestration capabilities across multiple SDN/NFV domains.

Further details on the proposed NBI, test bed setup, and results of the experimental validation can be found on our NetSoft 2017 paper [NetSoft 2017].

Chiara Buratti (c.buratti@unibo.it) received the M.Sc. degree in telecommunication engineering and the Ph.D. degree from the University of Bologna in 2003 and 2009, respectively. Since 2011, she has been an Assistant Professor with the University of Bologna. She has coauthored over 80 technical papers. Her research interests are on wireless sensor networks and Internet of Things, with particular attention to MAC and routing protocols. She collaborated in many European projects, and she has been responsible for the Bologna site of the EuWIn platform developed within the NoE Newcom# and the Co-Chair of the EWG-Internet of Things of the Cost Action IRACON.

Simone Marco Cerboni (simone.cerboni@gmail.com) received his bachelor degree in Electronics and Computer Science Engineering from University of Perugia, Italy, in 2014. In 2016, he received his M.Sc. degree in Telecommunications Engineering from University of Bologna, Italy, with a thesis about software defined networking applied on IoT networks (SWIoT).

Gianluca Davoli (gianluca.davoli@unibo.it) received his M.Sc. Degree in Telecommunications Engineering from the University of Bologna in April 2017, with a thesis on “Intent-based approach to virtualized infrastructure management in SDN/NFV deployments,” focused on the development of a QoS-enabled northbound interface for the SDN controller ONOS. He currently works as Research Fellow at the same University, as part of the regional project SACHER, on the control and management of Software Defined Networks on Cloud Computing platforms. His main field of interest is dynamic Service Function Chaining in SDN/NFV environments.

Chiara Contoli (chiara.contoli@unibo.it) graduated in Computer Engineering from the University of Bologna, Italy in 2013. In the same year she was research scientist at the University of California at Los Angeles, where she worked on Content Delivery Networks for automotive applications. In 2016, she was a visiting scholar at Saint Louis University, where she worked on network architecture and protocols design. She received the PhD degree in Electronic, Telecommunications and Information Technologies from the University of Bologna in 2017, where she is currently a post-doctoral researcher. Her research interests are in programmable networks, SDN, NFV and more generally on advanced networking architectures and protocols.

Francesco Foresta (francesco.foresta@unibo.it) is a graduating Master Student in Telecommunications Engineering at the University of Bologna, Italy, where he also got his Bachelor Degree in Electronics, Computer Science and Telecommunications Engineering in 2015. Since November 2014 he has been working at the University of Bologna performing research on SDN-based cloud computing solutions. In 2017, he was an Intern at Huawei in Shenzhen, China and was awarded with the Certificate of Honor as one of the Top 10 Italian graduating students in the IT area. His current research interest is in the integration among SDN frameworks and cloud computing platforms, in particular for orchestration purposes.

Franco Callegati (franco.callegati@unibo.it) is an associate professor of telecommunication networks at the University of Bologna, Italy. His research interests are in the field of teletraffic modeling and performance evaluation of telecommunication networks. He is currently working on performance evaluation and experimental validation of SDN/NFV-based networking solutions. He has been active in EU-funded research projects since FP4, where he led activities and participated in various steering committees.

Roberto Verdone (roberto.verdone@unibo.it) received the M.Sc. degree in electronics engineering and the Ph.D. degree from the University of Bologna in 1991 and 1995, respectively. Since 2001, he has been a Full Professor of telecommunications with the University of Bologna. He has authored or coauthored over 100 research papers, mostly in IEEE journals or conferences. His research activity is concerned with both infrastructure-based radio networks and infrastructureless radio networks. Main topics investigated in the last ten years are radio resource management for cellular systems, and MAC, routing, and topology aspects of wireless sensor networks.