One of the challenges in software networks management is the design of an underlying framework to support and accelerate the production of applications and services by relying on Software Defined Networks (SDN), Network Function Virtualisation (NFV) and Cloud principles. Their success depends on the notion of abstraction and the availability of reliable service manager architectures fulfilling the agility, acceleration and automation requirements of next generation services.

The notion of abstraction is essential for agile services creation so that programmers consume an underlying service without knowing much about it other than its inputs, outputs and functionality. With abstraction, there are two types of creations. The first is the creation of the services themselves by assembling lower level services. The second is the generation of these lower level services, seen as abstractions (concepts or building blocks) by the higher level service. Agile services are created by first identifying and building the lower-level services upward from the resources. Once a catalog of these underlying services is defined and made available, high level service creation can use and assemble them into ‘‘services’’. A service is agile if the need to propagate changes in the low level services into the service definition is ideally eliminated or at least minimized. This means that requested service templates or workflows remain unaffected and unmodified by underlying changes. In the context of SDN, NFV and Cloud, this means that changes in real devices or virtual infrastructures (containers, networks and networking functions) have to be hidden from the service definition and workflows. Consequently, the provisioning of different abstractions and their deployment on different virtual platforms can vary (or can be altered) without changing the service and the way it is assembled or produced. 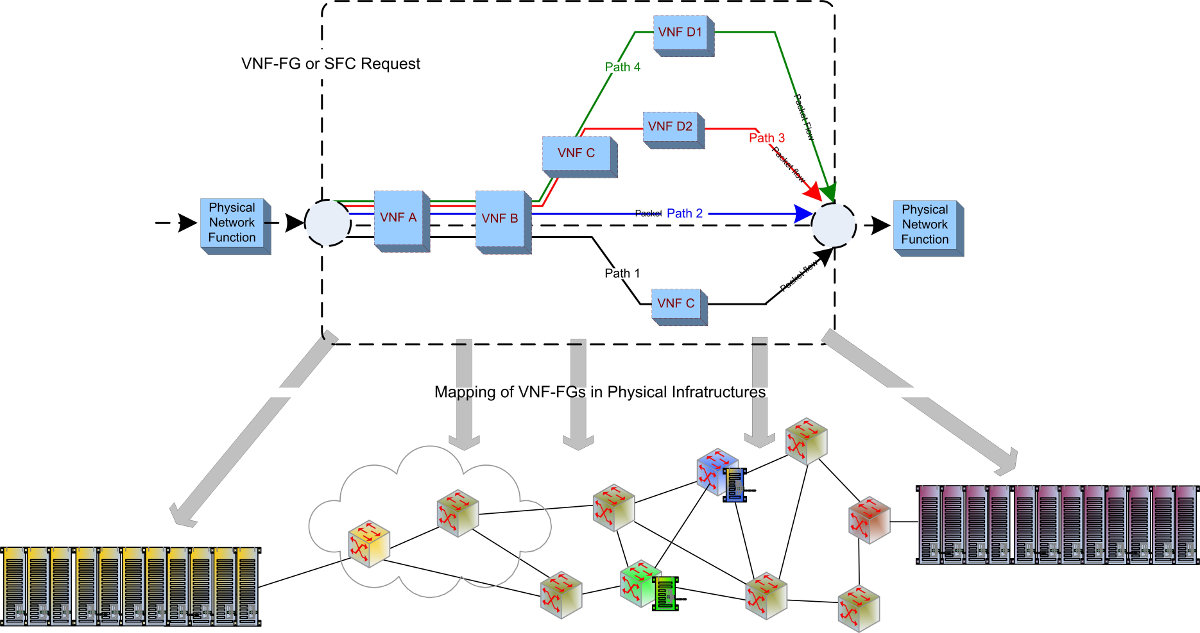 A challenge, in NFV, that deserves special attention is the chaining of network services. Tenants can acquire, from providers, chained virtualized network functions and the means to steer and control their application and end users traffic flows. Figure 1 depicts a service function chain (SFC) or virtualized network function forwarding graph (VNF-FG) request with several VNFs and four application flows to steer into their respective forwarding paths 1 to 4. This is a good technical use case to derive appropriate agile services management architectures as it entails the description of network services (VNFs), their smart placement and the steering of their application flows through specified forwarding paths. VNF-FG establishment requires setting up of the containers or hosts of the VNFs themselves, their connectivity and the injection of rules to steer application flows into the desired forwarding paths. Designing a service management framework for VNF-FG can therefore fulfill most of the NFV needs and meet the requirements of network services chaining.

Service management in SDN and NFV

Service management in SDN and NFV is currently focused on the concept of orchestration to support service lifecycle management. The NFV Orchestrator in ETSI-NFV [1] is responsible for:

NetCracker’s Service Orchestrator [2] enables end-to-end service provisioning for hybrid networks made of both virtualized SDN/NFV-based components and traditional network technologies. Other service life cycle management frameworks, such as ITILv3 [3] (Information Technology Infrastructure Library), that describe the life of an IT service (from planning and design to delivery and continuous improvement) are also used for IT lifecycle management. TOSCA (Topology and Orchestration Specification for Cloud Applications), from OASIS [4] [5] (Organization for the Advancement of Structured Information Standards), aims at enhancing the portability of cloud applications and services. TOSCA enables interoperable description of application and infrastructure cloud services independent of the suppliers creating the service, the cloud providers or the hosting technologies.

Despite these specifications, the merging of cloud, SDN and NFV in a cohesive system still requires further research and development. TOSCA addresses well cloud services and resources and their use to compose complex cloud services but network services are not part of its specification. There are no descriptors for networking services in TOSCA and no means to include virtualized network functions, their connectivity and chaining. There is a need to bridge and combine these domains by extending the service request descriptions to encompass cloud, network and control services.

One approach to provide abstractions for cloud and network services joint management is to extend the TOSCA data model with network services descriptors so it can also cover networking technologies. Current service descriptions and service templates that are likely to fulfill the agile service goal and can cover cloud, SDN and NFV are YAML [6], JSON and XML. YAML is the most expressive and more natural language for describing high level complex services when compared to XML and JSON.

In the current state of the art, the most appropriate and most expressive and extensible cloud service specification, to combine with YAML, seems to be TOSCA that uses a service specification framework (with service templates, languages and grammar) for cloud services. TOSCA defines key service templates and components for service description and service life cycle management: 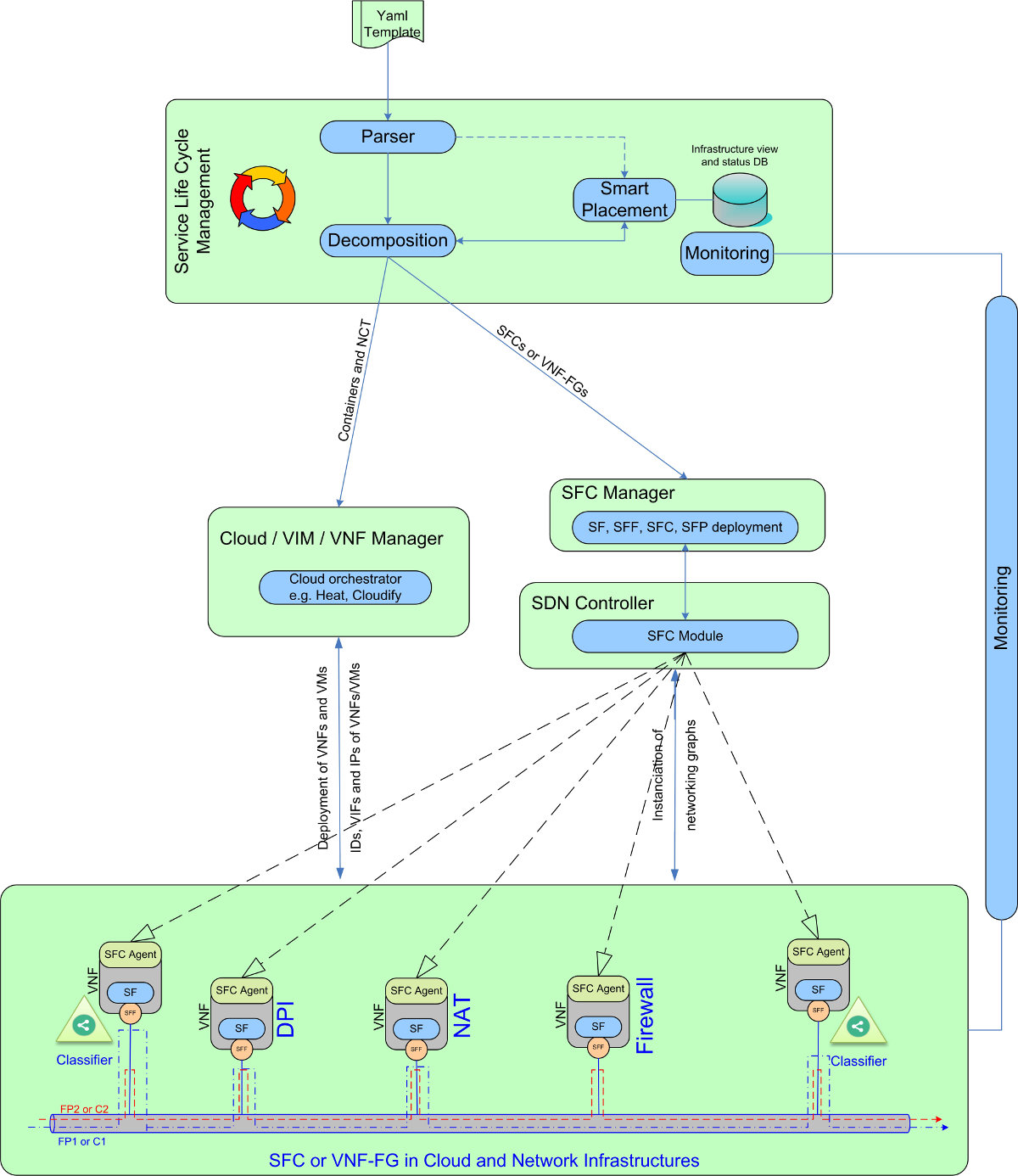 Figure 3 “block A” represents the original TOSCA grammar used for abstract representation of cloud applications. The topology template can be seen as a directed graph with Node Templates as vertices and Relationship Templates as edges connecting them. The Group Templates form sub-graphs of the Topology Template graph. The node template is an abstraction of the application or the user requested resource. The TOSCA data model, limited to cloud applications, has to be extended to support the representation of VNFs and their stitching to form a VNF service chain. A proposed extension of the TOSCA grammar and data model is depicted in blocks B and C of Figure 3. 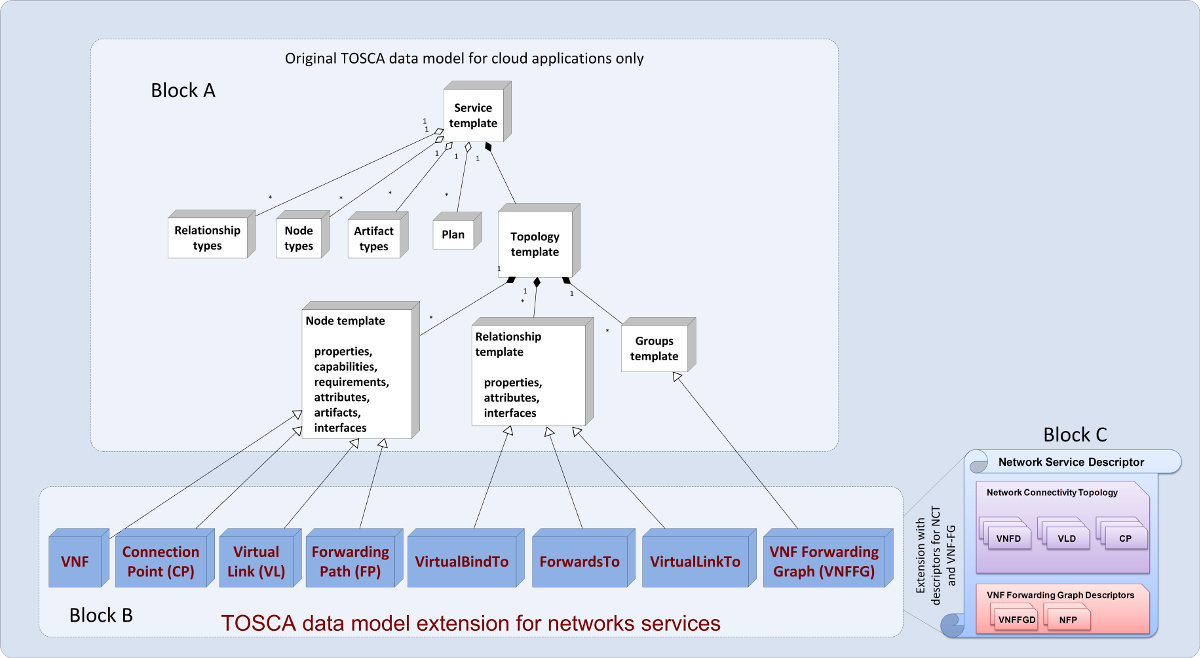 In the ETSI-NFV standard and terminology, there are two types of graphs composing the network service descriptor [1] and these must be included in the TOSCA model (blocks B and C of Figure 3):

The proposed TOSCA extension (block B of Figure 3) and the associated parser (see Figure 2) use the notion of node template by inheriting new nodes to represent the VNF, CP, VL and NFP components. The VNF node is characterized by the associated VM and the network function appliance that will be hosted on the VM. The network function appliance is represented as an artifact element in the TOSCA grammar. The VL represents the virtual link that interconnects the VNFs. To establish this connection, we use the new inherited relationship nodes to bind the CP to the VNF (the “virtualBindTo” relationship) and to link the CP to the VL (using the “VirtualLinkTo” relationship). The forwarding path (FP), inherited from the node template, is modeled as an ordered list of CPs forming a sequence of VNFs that will be traversed by packets or traffic flows. The FP is connected to CPs by the “ForwardsTo” relationship. Each VNF forwarding graph includes a list of FPs that are interdependent and have common characteristics (e.g. several FPs have the same source and destination IP addresses). For this reason, the VNF-FG is modeled as a Group and thus inherits from the Groups Template of the original TOSCA model. The proposed extension is used by the service life cycle management depicted in Figure 2 to ensure orchestration of both cloud and network services and the provisioning, instantiation and management of SFCs or VNF-FGs.

The SLC manager interacts also with the SDN controller to set up the required virtual network functions and the forwarding graphs. The key modules of the SLC manager are the:

The SLC Manager translates the NCT graph to the language used by the Cloud orchestrator (Cloudify blueprint, Heat Orchestration Template…). The SLC manager sends the created template to the cloud orchestrator to instantiate cloud resources. The VNF-FG, that defines the requested chains and their forwarding paths, is only deployed once the VMs are successfully instantiated by the cloud orchestrator and provided with addresses. The SFC manager deploys the VNF-FG by invoking the SDN controller that achieves the stitching of the VNFs (connecting the SFs more precisely). The proposed SFC manager depicted in Figure 2 interacts with the SFC module (an extension of ODL SFC module) to deploy the SFCs. The SFC manager deploys the SFs (VNFs); the SFFs (CPs); the SFCs (VNF-FGs) and the SFPs (FPs). These configurations are then sent by ODL to the VMs through the SFC agent.

The approach and architecture presented in this letter is the result of joint work with Imen Grida Ben Yahia from Orange Labs and Marouen Mechtri who master minded the concepts and implemented the framework. The original study received partial funding from Orange labs and the French FUI.

Professor Djamal Zeghlache graduated from SMU in Dallas, Texas in 1987 with a Ph.D. in Electrical Engineering and joined the same year Cleveland State University as an Assistant Professor. In 1992 he joined the Networks and Services Department at Telecom SudParis of Institut Telecom where he currently acts as Professor and Head of the Wireless Networks and Multimedia Services Department. His current interests and research activities concern network architectures, protocols and interfaces to ensure smooth evolution towards loosely coupled future networks and cloud architectures. He is currently addressing optimization, deployment, control and configuration challenges in cloud, SDN and NFV environments and systems.