Proactive Management of the Virtualized Mobile Core for IoT

Machine to machine (M2M) communications enable the Internet of Things where billions of devices, typically low power devices requiring low data rates, work with little or no human intervention. The convergence of cellular and Low Power Wide Area networks (LPWANs) under the umbrella of 5G is expected to connect a new generation of such M2M devices. However, the majority of current wireless systems, including LTE/LTE-A, are currently designed and optimized to support mainly Mobile BroadBand (MBB) services and so not ideally suited for the M2M communication scenarios.

Due to the aforementioned heterogeneous characteristics a "one-size-fits-all" network configuration solution, as envisaged in LTE/LTE-A, is not practical. In addition, LPWANs are very heterogeneous environments, supporting lots of end-devices for different applications with different requirements using the same IoT infrastructure, but they lack of advanced/developed management and orchestration tools.

Platform for the Proactive Management of Virtualized Mobile Core for IoT

In order to alleviate the aforementioned inefficiencies, a number of steps should be taken in order both core and access networks to become more agile, in their ability to dynamically instantiate new services, allocate resources on-demand and pre-allocate resources. This agility should be accompanied with the appropriate tools to exploit it and provide configuration solutions which are fine tuned to the temporal and spatial network needs and require minimum human intervention. In this direction, the virtualization in core network, e.g. the deployment of a virtual EPC (vEPC) ([3], [4]) instead of a legacy one, is the main driver for increasing this kind of agility, since in the virtualized case the total EPC resources can be arbitrarily allocated among the EPC modules. EPC virtualization is a relevant example of NFV that has attracted a lot of attention from industry ([4],[5]). LPWANs are very heterogeneous and complex environments which lacks of advanced management tools, while the recent emergence of multi-link functionalities which support alternative transmission paths and improve availability and reliability, increase further this complexity. Therefore the development of advanced management and orchestration tools is of high importance. These solutions can be further enhanced by efficient SDN/NFV architectures e.g. the ARCADIA framework [2], which extend this flexibility in the software development, deployment, and execution phases.

The aforementioned configuration possibilities will have significant impact on IoT networks if they can be realized: a) in a spatial and temporal manner (e.g. the IoT traffic volume may vary from cell to cell and from time to time); b) in a highly automatic manner with minimum human intervention; c) can be enhanced with prediction capabilities in order to support proactive control and management.  In this direction, an analysis for prediction and proactive management framework is proposed, illustrated in Fig.1. In order to deliver value, the framework relies on a continuous loop that iterates among collecting data from the 5G, analyzing data for learning patterns, predicting future conditions, producing and enforcing management actions and finally learning the efficiency of the management actions by obtaining feedback from the infrastructure. 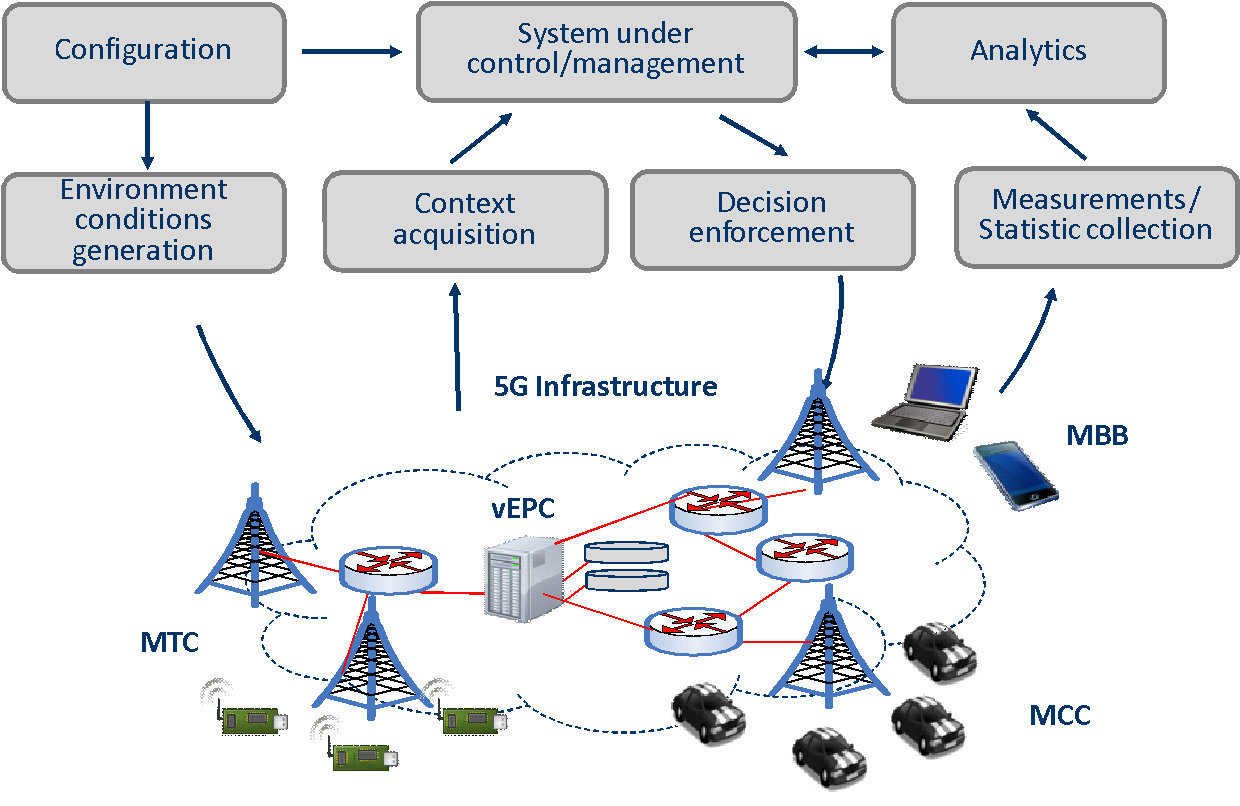 The proposed platform can be implemented as a Proof of Concept (PoC) by integrating the monitoring, analysis, prediction and optimization platform with a 5G network infrastructure, as illustrated in Fig. 2. The 5G infrastructure can be comprised of a virtual EPC, the cellular access nodes (e.g. eNodeBs) and the available LPWANs (e.g. based on LoRa [6] or Sigfox [7] technologies). On the other end of the network is the IoT Server which handles IoT reports generated by the sensors. The initialization, configuration and reconfiguration of vEPC VNFs (e.g. PCRF, HSS, MME), can be realized through the communication with the northbound interface of vEPC, while agents should be implemented and placed in the IoT gateways in order to enable the communication with the LPWANs. The communication in northbound interface can be realized using alternative solutions, like REST which is a more lightweight protocol, SOAP protocol or a simple CLI interface. The basic building blocks of the proactive management platform are the Environment Condition Generator, the Analyzer and the Optimizer. The Environment Condition Generator is responsible for the initial network planning and deployment of initial configuration actions. The Analyzer collects measurements and statistics from the network and builds knowledge which is delivered to Optimizer. The main responsibilities of Optimizer are the decision making process based on current network conditions and predictions on future network conditions and the enforcement of configuration actions to the network elements. The latter is realized through the northbound interface of vEPC and the deployed IoT agents. 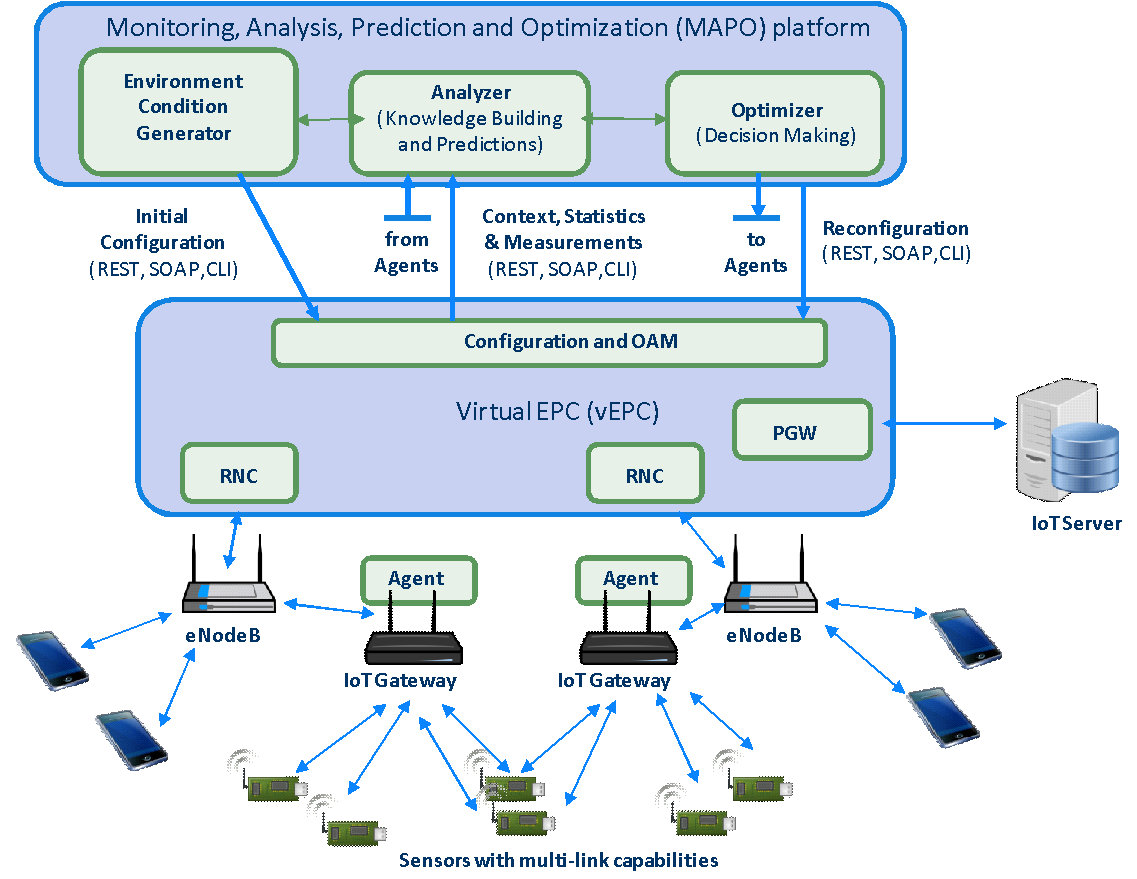 As with all new architectural approaches, the aforementioned possibilities come with their own challenges. Regarding research challenges one interesting aspect is the efficiency of the proposed platform to predict significant changes on the 5G infrastructure which require the reconfiguration of the vEPC and/or the IoT gateways. Significant changes may include for example a notable change of MBB/MTC/MCC service mix, or a significant change in the traffic volume and mix in a spatial or temporal manner. The aforementioned efficiency can be expressed by the ability to predict significant changes in a fast and reliable manner. This is a significant gain compared to the current reactive platforms (reacting to a second or even minute scales), since it will minimize the time (down to ms) between the actual change and the reaction to this change. In terms of performance indicators it can be measured by the prediction accuracy and the before-after performance gains of the network.

Another important challenge is the optimal capture and processing of IoT data. In a LPWAN most of the data produced in the network may not be useful to any user. Therefore in order to minimize the huge traffic entering the core network (600K devices per Km2 are expected to be connected in the near future [8]) to only the useful one, the configuration of the IoT gateways should include rules for data filtering and possibly processing. In terms of gains, an efficient filtering may significantly decrease the volume of IoT traffic traversing the 5G core network.

In addition, a major challenge is the satisfaction of the strict requirements imposed by the emerging MCC services, namely ultra low latency (below 1ms [8]) and ultra reliable connectivity (at least 99.999% [8]). In this direction, the level of convergence between the vEPC and the LPWANs in terms of cross-technology optimization and end-to-end QoS/QoE support, will affect the latency related KPIs, while the exploitation of the multi-link capabilities of sensors can increase the reliability and availability KPIs.

Finally, a challenge which is of vital importance for the stakeholders (e.g. network operators) is the minimization of human intervention. The objective of the proposed platform is the automatic configuration/reconfiguration of the vEPC and IoT networks based on current statistics and predictions based on stored knowledge. The adoption of a close loop proactive management platform (like the one proposed) with strong predictive capabilities based on machine learning techniques will dramatically decrease the human intervention to only minimal tasks like the definition of the system targets.

Dr. Kostas Tsagkaris is Managing Director and Head of Technology of Incelligent. He holds a bachelor and PhD degree (“Ericsson’s awards of excellence in Telecommunications”) from the School of Electrical Engineering and Computer Science of the National Technical University of Athens (NTUA). Since 2005 he is working as a senior research engineer and adjunct Lecturer in the undergraduate and postgraduate programs at the Department of Digital Systems of the University of Piraeus. In 2012 he co-founded WINGS ICT Solutions, an SME conducting research and development in 5G wireless access systems, device management, software networks and IoT. In 2014 he also co-founded Incelligent, a spin-out of WINGS ICT Solutions producing software for the predictive management and optimization of telecom operations. He has been involved in many international research projects and bilateral collaborations with the telecom industry, especially working in the areas of design, management and optimization of wireless access/core networks, self-organizing and autonomic networks, network virtualization and softwareization and software engineering. He has published more than 160 papers in international journals and refereed conferences in the areas above. Dr. Tsagkaris is a Senior Member of IEEE and a member of the Technical Chamber of Greece. He participates as an expert in the ETSI Specialist Task Force (STF) 501 on Autonomicity and Self-Management in the Backhaul and Core network parts of the 3GPP Architecture, while he has also participated and contributed to other EU and US standardization committees and working groups such as RRS and AFI-ISG groups in ETSI and IEEE DySPAN/P1900.4 group, where he has also served as Technical Editor of the published standard.

Prof. Panagiotis Demestichas received the Diploma and the Ph.D. degrees in Electrical Engineering from the National Technical University of Athens (NTUA). He is full Professor (since April 2012) and has been the Chairman (September 2011 – September 2015) of the Department of Digital Systems of the University of Piraeus. In the period from October 2015 to September 2016 he was on Sabbatical, collaborating with the University of Surrey and in particular its 5G Innovation Center. He has over 25 years of experience in R&D in the fields of wireless/mobile broadband networks, fixed-mobile broadband convergence, Internet technologies, network planning and management, smart cities and environment management. Recent interests include 5G aspects, and especially, the exploitation of spectrum beyond 6 GHz, overall spectrum management, 5G architectures, knowledge-based and predictive management, virtualization technologies based on SDN and NFV. He has several publications in these areas in international journals and refereed conferences. At the European level, he has been actively involved in, and coordinated (project manager, deputy project manager, technical manager), a number of international research and development programs. He also organized the European Conference on Networks and Communications (EUCNC 2016), which will take place in Athens, Greece in June 2016. He has also been involved in several bilateral collaborations with international and national industrial entities and public-sector organizations. In terms of standardization, he has contributed to various standardization bodies such as ETSI and IEEE. He was also chairing Working Groups of WWRF related to next-generation networking and advanced management technologies. He is a senior member of the IEEE, member of ACM and the Technical Chamber of Greece.

Dr. Christos Kolias is a principal research scientist and head of the Netsquared Studio at Orange Silicon Valley (a subsidiary of Orange). He is a co-founder of NFV and the ETSI group and had led the formation of the ONF's Wireless & Mobile working group of which it was its first chair. He has lectured on NFV and SDN at several events. He has more than 15 years of experience in networking and is the originator of Virtual Output Queueing (VOQ), used in packet switching. Christos holds a PhD in computer science from UCLA where he studied under Prof. L. Kleinrock.

Roberto Bifulco is a researcher in telecommunications, with a strong interest in the design of programmable networks and in the definition of new use cases that leverage those. His main contributions are  in the fields of SDN scalability and security, high performance network function virtualization and service function chaining. Since 2012 he joined the NEC Laboratories Europe’s Network Division (Heidelberg, Germany), where he works as Senior Researcher in the lab’s Software-defined Networking and Network Function Virtualization teams. Roberto holds a Ph.D. from University of Napoli "Federico II", Italy. Before joining NEC he worked as consultant for ICT start-ups and SMEs (Small and Medium Enterprises) in the area of cloud computing and virtualization.