Quality of Service and Quality of Experience are key characteristics of Telco environments. As NFV deploys, metrics, performance measurement and benchmarking are getting more and more important for Telco Cloud to deliver best in class services. If we consider performance management across a classical ETSI NFV architecture, we have different building blocks to consider:  the NFV Infrastructure (NFVI), the Management and Orchestration (MANO) stack, the different Virtual Network Functions (VNF) and Network Services (NS). A number of metrics need to be defined when designing each of these component, then some methods need to be implemented to collect these metrics appropriately and interfaces need to be available to carry the results across the architecture to different ‘authorized and subscribed consumers’ of the metrics. Then performance measurements can be done either as part of pre-validation, with simulated steady traffic or with peak of traffic. But performance measurements can also be done on a live environment on an ongoing basis or on demand to check the behaviour of the network. Two types of measurements are typically performed: Quality of Service, ensuring that the network behaves according to expectations, or Quality of Experience, ensuring the user perception of the network and service quality is according to expectations. These different concepts have been described in some initial specifications in ETSI NFV, i.e. PER001 [1], then further refined in other specifications that will be detailed below. In parallel, a number of tools have been designed by the open source community, in particular in the context of the OPNFV collaborative project [15]. Other standard organizations have also specified benchmarking, for instance IETF. Strong collaboration has occurred between those different entities and contributors to ensure consistency and complementary work. As NFV is touching on many different areas such as Telco Cloud, fixed and mobile network functions, customer premises environment, management platform and processes, service deployment and operation, many different types of metrics have to be defined and collected. It became obvious that a number of metrics could be leveraged from existing standards in some of these areas, but also that some overlaps or inconsistencies existed when mapping those metrics to the ETSI NFV architecture. As a result, an initiative was triggered across the industry in order to align metrics for NFV across key stakeholders. In parallel, a few telecom operators advanced in NFV deployment, such as Verizon [16], have issued requirements in terms of metrics they want suppliers to provide. Finally, as technology evolves, with new hardware, networking and virtualization capabilities, metrics and measurement methods and tools get also to evolve. New usage also drives new performance requirements that drive new technologies, metrics and measurement capabilities.  In conclusion, NFV metrics and performance management is a long journey and this paper is just giving an introduction and update on some of the current highlights.

Metric: standard definition of a quantity, produced in an assessment of performance and/or reliability of the network, which has an intended utility and is carefully specified to convey the exact meaning of a measured value.
NOTE: This definition is consistent with that of Performance Metric in IETF RFC 2330 [8], ETSI GS NFV-PER001 [1] and ETSI GS NFV INF010 [2].

NFV: Network Function Virtualization, as defined by ETSI NFV. NFV consists into virtualizing network functions for fixed and mobile networks and provide a managed virtualized infrastructure with compute, network, storage virtual resources that will allow the proper deployment and operation of those virtualized network functions to deliver predictive and quality communication services.

Considering the ETSI NFV reference architecture, metrics can be collected on any of the components of this architecture as described below in Fig 1. 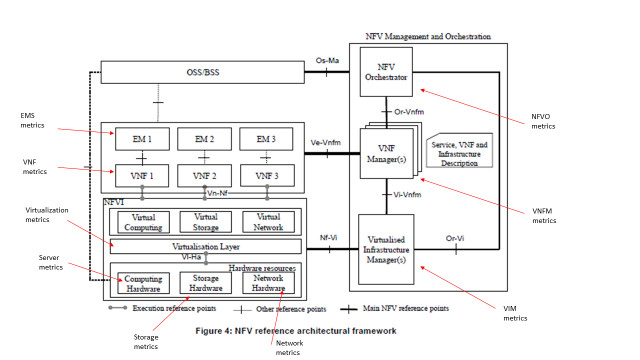 Initial work on performance and metrics was conducted in ETSI NFV PER001 [1] which was very focused on the NFV Infrastructure (NFVI), providing a list of minimal features and requirements for “VM Descriptor”, “Compute Host Descriptor”, Hardware (HW) and hypervisor to support different workloads such as data-plane or control-plane VNFs typically, and ensure portability. This work has led to the initial work on NFV in the industry, helping developers to best leverage IT systems for telecom functions, and infrastructure provider to enhance their system capabilities to meet telecom virtualized software requirements.

The objective of [2] is to define explicitly some metrics between Service Providers who provide NFVI and MANO, and Suppliers who provide VNF, to ensure that resources provided by Service Providers including operational environments provide the level of performance that is required for given VNF to deliver predictive quality of service for given end user service. Table 1 is summarizing all the different metrics (source: ETSI NFV INF010 [2]).

ETSI NFV IFA003 [6] is focusing on one important element of the NFV infrastructure which is virtual switch (vswitch) and defining performance metrics  for benchmarking vswitch in different use cases, being overlay, traffic filtering, load balancing, etc – It is also defining underlying  NFVI Host and VNF characteristics description that will ensure the consistency of the performance benchmarks. Examples of NFVI host parameters includes OS and kernel version, hypervisor type and version, etc.

ETSI NFV TST008, “NFVI Compute and Network Metrics Specification” [5], is defining normative metrics for Compute, Network and Memory. It is also defining the method of measurement and the sources of error. This specification is coupled with IFA027 [4] that will carry these metrics across the MANO interfaces to the different interested entities.

Besides defining metrics and being able to generate and collect measurements, it is quite important while designing a VNF to be able to properly size the set of resources required to meet given performance. Several publications address this topic either focusing on specific function benchmarking, i.e. vswitch [6] [7], firewall [9], IMS [13], or beyond that, defining a more generic methodology and platform [10] to perform VNF benchmarking whatever the VNF is: simple VNF with only one VNFC, or complex VNF with multiple VNFC, data and control plane, intense compute, I/O or memory usage.

NFV Vital [13] is one of these methodologies and platforms that studied different use cases, including performance of the opensource virtual IMS ‘Clearwater’. The diagram below shows the ‘best’ performance when scaling the different deployment flavors: s (small), m (medium) and l (large), typically 1000 calls for the large (red) configuration.

OpenStack as an Opensource Virtual Infrastructure Manager (VIM) is providing a number of tools for performance and benchmarking that can be leveraged for the NFVI.

OPNFV is the Linux Foundation open source project that is developing a reference implementation of the NFV architecture. OPNFV leverages as much as possible existing code and tools from upstream open source projects that contribute to NFV architecture such as OpenStack but also OVS (Open VSwitch), OpenDaylight (SDN Controller), etc. OPNFV has defined a set of ‘umbrella’ tools for testing NFV environments. Among those, some of them are more specifically focused on performance management such as Qtip, StorPerf and vsperf project tools.

As Telco Cloud evolves embracing new technologies such as new hardware platforms for the NFVI, including hardware accelerators such as FPGA for instance, or Smart NIC, but also new virtualization engine such as containers, or SDN based networking, new metrics are being defined that either vendors provide through some open API, or that can be measured with some black box methods. Standard interfaces may also need to be updated to support these new data collection and distribution mechanism. Moving to 5G some new requirements also start to materialize, such as network slicing end to end performance which require some new performance measurement mechanisms and correlation that keep up with the dynamicity of the network and associated virtual resources. A typical example is video streaming through a network slice, where network metrics (QoS) and customer quality of experience (QoE) measurements comparison may trigger some tuning of the slice adding some virtual resources, for example additional bandwidth, more vCPU to process the video, or inserting some VNF in the service chain, such as video optimization.. Last but not least, with analytics and machine learning, predictive analytics can support performance analysis by processing data which are not just classical ‘collected’ metrics, but by comparing behaviors, such as network, application, consumer or device behaviors, deriving performance degradation or improvement and identifying root cause. As networks get more programmatic and more dynamic, the combination of performance management with metrics data collection and broader analytics will become more and more relevant.