Abstract - Wireless networks operating in unlicensed bands suffer because multiple radio technologies have to share the same frequency resources causing cross-technology interference. However, in industrial scenarios various technologies have to be supported to connect any kind of application to the network. One solution to solve those challenges is to use one flexible physical layer (PHY) chipset, instead of multiple PHY chipsets to interconnect the different wireless sensors, robots or cameras. Since only one flexible chipset is going to be utilized, the parameters of the signal processing inside must be reconfigured quickly to emulate the different radio access technologies. This article gives an overview of a testbed that offers a flexible PHY implementation with fast reconfiguration. The goal is to provide an interface for SDN solutions to offer different network services in unlicensed bands.

Introduction – 5G NR technologies introduce more flexibility and adaptivity to cellular communications than previous standards. Especially, 5G flexible numerologies allows network controllers to adapt the properties of the physical layer to the applications and/or wireless scenarios. This includes for example the subcarrier spacing, bandwidth and the resource allocation. An overview of the radio-slicing concept for cellular communications is given in [1]. Still, the underlying technique will be the 5G NR physical layer (PHY) and its respective waveform.

In contrast, in industry scenarios, network slicing should support very different use cases with different radio access techniques, particularly including a change of the physical layer waveform itself. The reason is that various types of wireless technologies have to be connected, because diverse applications need access to cloud platforms. Harmonizing all those applications to use strictly one technology is a non-trivial challenge. For example, legacy systems cannot be updated to newer standards and embedded sensors have to deal with low energy consumption and therefore cannot use complex communication systems. Typically, several and independent Access points (AP) are used. Especially their non-synchronized operation leads to interference that results in reduced network performance as experimental studies in the EU Horizon 2020 project eWINE show.

Decoupling User Plane and Control Plane and controlling radio channels with SDN could solve this issue of RAN slicing, if all involved network elements at the AP support multiple technologies in a harmonized approach. The idea is to use one flexible PHY chipset, instead of multiple PHY chipsets. This has the advantage that only one chipset with a higher quality radio frequency (RF) chain can be used rather than several independent ones. More important, also the timings between the different PHY-services can be aligned, and thus, the inter-service interferences can be reduced. This allows using the frequency bands more efficiently. However, since only one chipset is going to be utilized the parameters of the signal processing must be reconfigured quickly. 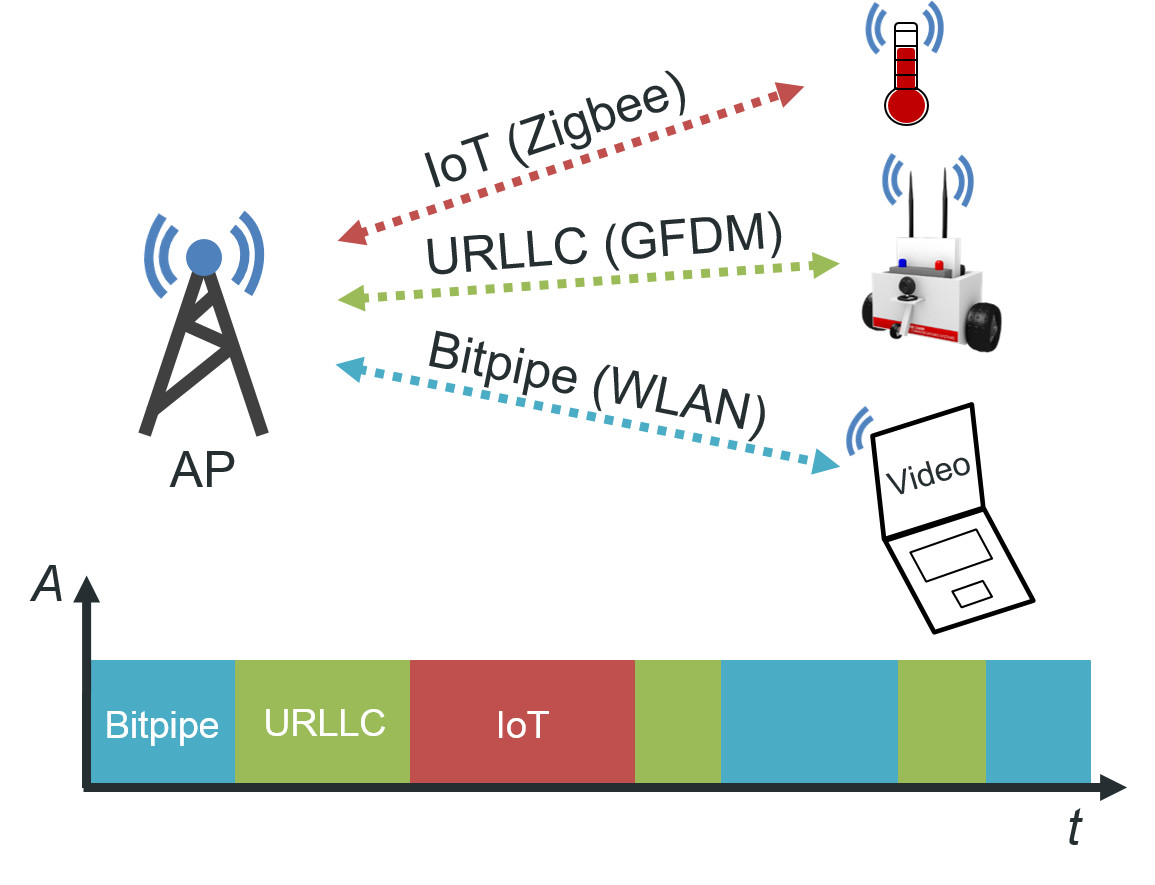 Envisioned access point - Figure 1 presents the envisioned communication system where one AP provides different clients with different services using different numerologies. In this case, IoT sensors are served with ZigBee communications for legacy reasons, whereas the robot receives control information provided by a cloud-based controller with an Ultra-Reliable Low-Latency Communication (URLLC) service. Since ISM (Industrial, Scientific and Medical) bands are not restricted to certain physical layers, a modified 5G NR or other PHY proposals could offer the URLLC service. Finally, a WLAN network is provided for non-critical but high-throughput clients, all operating in the 2.4GHz band.

The goal is that one AP operates on a given frequency band for its services, such that the other bands can be used by neighboring APs, without overlapping to prevent interference. The multi-standard capabilities of one AP enable serving the clients in a time-aligned approach to prevent any inter-service interference within the range of the AP, instead of relying on Carrier Sense Multiple Access (CSMA) to negotiate which service gets access to the medium. Here, a scheduled airtime is given to a service where all other services are “turned off“. However, this idea only partially covers the interference issues, because a client can still jam the transmissions. At the AP there are two options to mitigate this. Either the protocol foresees an option to turn off clients for a time period, as for example in the Zigbee standard or the AP creates additional signals to ensure that enough energy is radiated. Especially new waveform candidates like Filter Bank Multi-Carrier (FBMC) or Generalized Frequency Division Multiplexing (GFDM) are supporting very steep filter banks and could embed the actual signal while transferring additional data.

Figure 2 provides an overview of the proposed system, which consists of a Hewlett Packard Enterprise (HPE) Edgeline EL4000 System with intense computing power for higher layer processing and a National Instruments (NI) USRP RIO Software-Defined Radio (SDR) platform to accelerate the signal processing of PHY and parts of the MAC layer. The SDR platform supports RF bandwidths up to 160 MHz in a frequency range up to 6 GHz and is connected to the HPE server via PXI Express for fast data exchange. 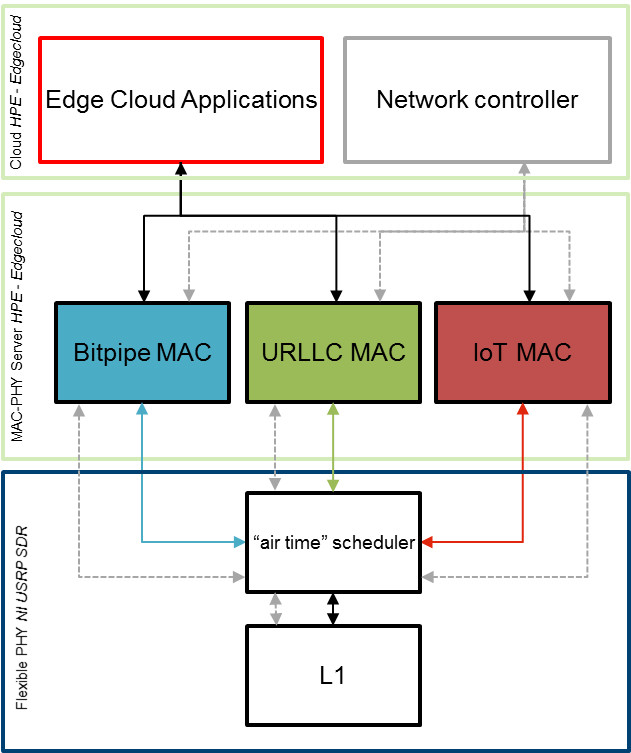 Figure 2: System overview: The data path is marked with a continuous line, the control path with a dashed line. The different MACs can be instantiated in software and then program the PHY according to the requirements.

Flexible physical layer – The starting point for the SDN-enabled SDR platform is the GFDM-inspired waveform generation framework, introduced in [2]. It provides a framework that is able to generate and receive commonly used waveforms and candidates for future wireless networks [3]. In [4], a modulator is shown which realizes the transmitter part in a programmable chip (FPGA) system. The focus in this implementation is to keep the structure as general as possible. Therefore, the implemented components can be parametrized during the run-time, with only very short reconfiguration times of few clock cycles. This for example allows changing the PHY layer between WLAN or LTE systems. Besides 5G NR, other 5G waveform candidates are supported are as well. The reason is that the generalized filtering unit can be preloaded with arbitrary filter forms. This allows to create signals with very low out-of-band emissions. Further, it also could be used to create spread spectrum signals used in ZigBee. The SDR receiver can support this wide range parametrization too.

The parametrization is realized through a Femto-Forum similar messaging system. The messages are passed from a network controller through all involved layers down to the modules on the FPGA and back to inform about events occurring during the signal processing. In Figure 2, the control path is marked with a dashed line.

The MAC layer is running on the powerful EL4000 to provide all the flexibility the different services need. A Linux Real-Time system ensures consistent and reliable data processing. Still, parts of the time-critical MAC procedure are implemented on FPGA. For example, in WLAN the receive ACK has to be transmitted within 10 µs, which cannot be achieved if the server CPU and its operating system is involved.

Initial Results – Figure 3 presents first results of the “airtime scheduler” and the flexible transmitter. It shows two different PHY configurations multiplexed in time, captured by another SDR device. The first, longer signal has a WLAN-like configuration with 64 subcarriers and 9 subsymbols, whereas the second signal only uses 32 subcarrier and three subsymbols for very fast signal processing as required by URLLC. In both cases, different preambles are prepended before the data block to distinguish between the different services. Please note that the signal shape of the preambles is modified for easy identification and will not be used in practical systems. The reconfiguration time is in order of a few FPGA clock cycles, which does not have any impact on the transmission efficiency as the FPGA signal processing operates at 200 MHz clock speed. The RF bandwidth is adaptable up to 160 MHz.

Figure 3: Captured RF signal of two different numerologies created by the “airtime scheduler” and the flexible transmitter multiplexed in time.

Conclusions – The presented RAN slicing using the flexible PHY [5] improves the spectrum efficiency by, at one hand, getting rid of the inter-technology interference using the same unlicensed band. On the other hand, the reconfiguration of PHY parameters allows adapting the communication system according to the current scenario. The latter option allows network controllers to influence the operations at the PHY on a packet level. This enables instantiation of multiple services using various wireless standards. The interaction of SDR with SDN is also subject to ongoing studies in the EU Horizon 2020 project ORCA, where third parties can participate using online testbeds and open source software components.

Martin Danneberg received his master degree in electrical engineering from the Dresden University of Technology in April 2013. During his studies, he focused on wireless communications and circuit design. His master thesis at the RF Engineering Chair dealt with the development of a backplane for a phased array. Since September 2013, he is a member of the Vodafone Chair and leading the research activities of the chair in the EU projects CREW, eWINE and ORCA. His professional interests revolve around non-orthogonal waveforms for future communication systems, especially about FPGA-based prototype implementations of flexible multicarrier modulation schemes.

Ahmad Nimr received his diploma in Communication Engineering from HIAST, Syria in 2004. Afterwards, he worked as a software and hardware developer from 2005 to 2011. Then, he perused a master of science in Communications and Signal Processing and obtained his M.Sc degree in 2014 from TU Ilmenau. His research at TU Ilmenau focused on tensor based signal processing. In addition, he contributed to the FP7 project EMPhAtiC. Since October 2015, he has been a member of Vodafone Chair Mobile Communication Systems, TU Dresden. He is currently carrying out research in low-latency multiple access and resources allocation techniques for 5G networks.

Maximilian Matthé received the Dipl.-Ing degree in electrical engineering from Technical University Dresden (TU Dresden), Dresden, Germany, in 2013. He is currently pursuing the Ph.D. in the Vodafone Chair Mobile Communication Systems at TU Dresden. During his studies, he focused on mobile communications systems and communication theory. He performed his internship at National Instruments Dresden and worked on the design and implementation of a measurement site for LTE test UEs. In his Diploma Thesis he concentrated on waveform design for flexible multicarrier transmission systems. His research focuses on the design and evaluation of MIMO architectures for future cellular networks.

Gerhard P. Fettweis earned his Ph.D. under H. Meyr's supervision from RWTH Aachen in 1990. After one year at IBM Research in San Jose, CA, he moved to TCSI Inc., Berkeley, CA. Since 1994 he is Vodafone Chair Professor at TU Dresden, Germany, with 20 companies from Asia/Europe/US sponsoring his research on wireless transmission and chip design. He coordinates 2 DFG centers at TU Dresden, namely cfaed and HAEC.

Gerhard is IEEE Fellow, member of the German academy acatech, and his most recent award is the Stuart Meyer Memorial Award from IEEE VTS. In Dresden he has spun-out eleven start-ups, and setup funded projects in volume of close to EUR 1/2 billion. He has helped organizing IEEE conferences, most notably as TPC Chair of ICC 2009 and of TTM 2012, and as General Chair of VTC Spring 2013 and DATE 2014.