Network Slicing for Conditional Monitoring in the Industrial Internet of Things

One of the key use cases for the future 5G network is the massive machine-to-machine communication for the Internet of Things (IoT) area, fulfilling a broad set of requirements, from massive bandwidth to extremely low latency and the huge heterogeneity of end devices. Subsequently, the network has to provide the IoT domain a dedicated network slice from the physical network. The network slicing concept describes a logical segment of a physical network guaranteeing a set of QoS requirements. More importantly, they are ensured for end-to-end communication, not only at the radio access segment, but also at the network core. The whole network infrastructure needs to provide provisioning, managing association to slices, interoperating and supporting performance and isolation [1].

To realize the concept of network slicing in 5G systems, Software Defined Networking (SDN) and Network Function Virtualization (NFV) play critical roles. SDN contributes a control plane which has the complete view and control on network resources such as network functions and computation infrastructure to quickly set up on-demand the configurable data plane to adapt to various requirements from applications. NFV provides tools to manage and orchestrate computation and storage resources needed to instantiate network functions. More importantly, this abstraction and separation of control plane from data forwarding plane support recursion, meaning that the control plane can include several hierarchical controllers. Network slicing can therefore be implemented in finer granularity to the IoT domain. Together, SDN and NFV manage the whole life cycle of network slices and maintain a comprehensive view on the network resources [2]. In this article we will describe how network slicing can be applied not only to the whole IoT as a slice, but also to solve practical problems such as surveillance and conditional monitoring in industrial IoT.

I. Conditional Monitoring for Industrial IoT

Considering the industrial IoT context, hundreds of thousands of sensors are distributed and installed throughout a factory to collect the status of machines and factory condition. Furthermore, those sensors are networked to enable ease of access and collaboration. The goal is to precisely catch changes in working conditions and especially faults and abnormal operations early and quickly. Intelligent algorithms will process those collected data to predict the conditions and possible actions. Both the correct operational status and a timely reaction are critical to reduce or even refrain from unplanned downtime. Its realization, however, requires a programmable network infrastructure provided by the future 5G enabling massive machine-to-machine communications as well as flexibility and agility to quickly adapt to a large fluctuation due to demand and situational changes.

One of the most expected use cases is Conditional Monitoring − illustrated in Figure 1. A large number of sensors collecting temperature, proximity, speed etc. − as well as audio and video signals are deployed in different parts of a factory. They naturally form clusters, which monitor the surrounding environment and machines’ status at all times. Signal and data packets, that are sampled by sensors are first collected at the aggregation nodes and then dispatched through switches and gateway to server farm to perform monitoring and analysis from a centralized operational center. It is desired that the operators can at any time, especially up on receiving warning or alarming signals focus on a specific segment of the factory for further investigation, such as to zoom in the surveillance video with higher resolution or to prioritize the received data from the alarm-giving segment for faster analysis and reaction. We distinguish three specific research objectives derived from the illustration in Figure 1:

O1 Assuming an abrupt change (cluster B) in the network requires a prioritized flow of data for further analysis, how to fulfill emerging QoS requirements in a shared infrastructure?

O2 Considering that a large number of dynamic connections are established in the network, in the case of a failed device (e.g., switch E) or temporary data traffic congestion (e.g., at switch F), how best to deal with dynamical routing and load balancing?

O3 Envisioning a large number of sensors sampling and collecting data 24/7, how will it be possible to achieve energy efficiency without compromising system performance?

We have seen network slicing supported by NFV and SDN as an enabler can integrate novel technologies such as compressed sensing and network coding to solve the above challenges.

On top of a programmable infrastructure, network slicing can allocate dedicated and adaptable resources for the conditional monitoring scenario as illustrated in Figure 2. Slice 1 can be allocated on-demand to address the objectives O1 and O2 of a critical mission, while slice 2 is used to monitor other traffic. The conditional monitoring application contains audio and visual data which needs a higher data rate than other sensors such as temperature sensors. With the centralized control, the resources can be flexibly re-allocated when the demands and network conditions change dynamically. To address objective O3, one approach is to reduce the energy consuming and the traffic volume delivered through the network. Compressed sensing, performed at sensors and at the intermediate network nodes instantiated via NFV, can potentially eliminate redundancy in the sensor data of adjacent clusters since their data are highly correlated. Furthermore, given the inevitable loss due to network congestion, a random linear network coding (RLNC) forward correction scheme can be used to increase throughput and reliability of the communication paths. The benefits of network slicing are not necessarily limited to inside one factory but can span several factory sites, given SDN capable gateways. Several options are available to implement slicing algorithms in either a standalone controller such as OpenDayLight [3] or multiple ones supported by FlowVisor [4]. The algorithms can also exist as SDN applications available for purchase from an online store such as HPE App Store [5]. 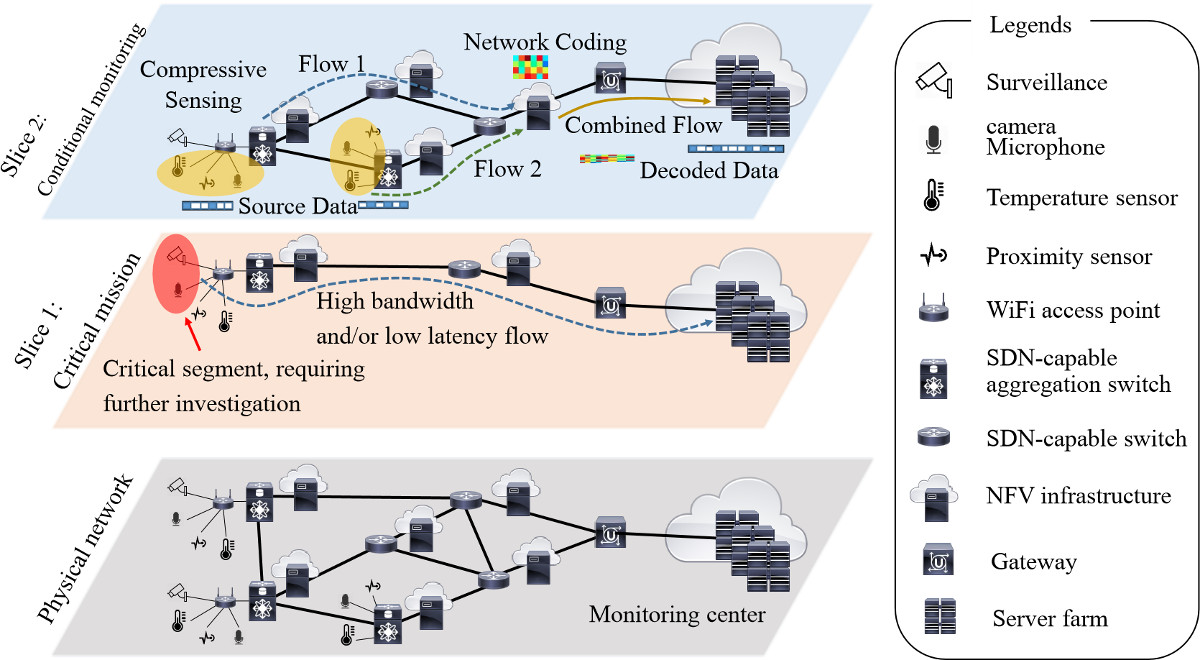 Industrial IoT’s fundamental use cases such as conditional monitoring and critical mission require a programmable network infrastructure enabled by NFV and SDN. On top of that infrastructure, network slicing, in combination with novel technologies such as compressed sensing and network coding realizes dedicated yet configurable slices to fulfill on-demand QoS requirements of the IoT use cases.