5G: Platform and Not Protocol

With the promise of offering ultra-reliable, low-latency high speed communications, 5G is expected to enable a golden digital age of remote healthcare, autonomous cars and advanced robotics use-cases. 5G heralds an explosion of augmented and virtual reality (AR/VR) applications and accelerates the already rapid growth of the Internet of Things (IoT).

But today's mobile networks are not set up in a proper way form handling 5G requirements without needing extensive over-engineering. To make 5G possible, networks need to borrow principles of the more scalable, flexible networks that deliver cloud-based services from IT companies like Amazon and Google. This transformation is called cloud native (refer to [10] for more details). For realizing this vision, another model than Infrastructure-as-a-Service (IaaS) must be adopted, a model derived from the cloud service providers themselves, a model made by the developers for the developers and known as the Platform-As-A-Service (PaaS) concept [11].

One of the requirement to build a PaaS is to adopt the micro-service based architecture. The micro-service approach allows to simplify complicated software systems by breaking them into sub-components and distributing these components across many computing servers. In this approach, an application consists of many small independent services, each service is running on its own independent process. The introduction of micro-services in cloud infrastructure supports modularity, flexibility and distributed software components. By adopting microservice architecture, now the de-facto standard, and a platform design approach, network slicing becomes naturally supported.

So far, the PaaS has been tailored to the needs of Web and mobile applications developers. However, PaaS is increasingly more exploited by other kinds of systems. A few companies already announced the development of PaaS for 5G applications, such as NOKIA [12], and ZTE Corporation [13]. PaaS technologies for 5G have not been designed yet, although they are key technology enablers.

Only a few projects considered the development of 5G PaaS, with M-CORD being the most notable one. ETSI NFV starts to look how ETSI-MANO can refactored to be a PaaS and supports the cloud native VNF [14][15].

In addition to, most of the PaaS available in the market lock you in their technological choice (e.g. OpenShift, CloudFoundry, etc). There is no “one-size-fits-all” solution. Instead, the “build-to-order” paradigm is adopted thanks to the components modularity introduced in the next section. Based on it, we are able to ‘build-to-order’ platform composed with the right technology suited to the deployed use-case matching their requirements (business, latency, throughput ...).

Platform-As-A-Service (PaaS) systems offer rich environments where to build, deploy, and run applications. PaaS provides infrastructure, storage, database, information, and process as a service, along with well-defined APIs, and services for the management of the running applications, such as dashboards for monitoring and service composition.

PaaS platforms differ on the set of services offered to developers, like the supported programming languages, the kind of components that can be deployed on these systems. They rely on the emerging paradigm of micro services [1]. The essence of micro services is to decompose complex applications into independent self-contained services. This is commonly realized by means of containers images that encapsulate all the dependencies required by an application [2]. Other type of virtualization is also available like unikernel.

Many features have been introduced to build efficient PaaS system to manage generic distributed resources and workloads including orchestration (e.g. Kubernetes [3]), analytics (e.g., Spark [4]), big data technologies (e.g., Cassandra), or SDN framework taking care of controlling the network among the different microservices or components. Although these systems have introduced innovative architectural choices to deal with containers they do not support features necessary for the development of carrier grade applications, (e.g., FPGA or packet processors).

So far, the PaaS has been tailored to the needs of Web and mobile applications developers. However, PaaS is increasingly more exploited by other kinds of systems, with 5G being one of them [5].

To solve the “one size does not fit all” dilemma and to unlock the technological choice of current solution building “end-to-end hard-wired” solutions, we adopt the “build-to-order” paradigm that best matches the business, latency, throughput… requirements thanks to the platform “composability”. A component is an extension of the Reusable Functional Block (RFB) introduced in [6] abstracting various virtualization (VM, containers, unikernels) & acceleration (GPU, FPGA, packet processors) technologies. We ‘build-to-order’ platforms suiting targeted use-case: platforms are made of VNFs (RAN, CORE, MEC, Video application, xHAUL...) and well-selected ancillary (orchestrator, intent-based controllers, message bus...) components. For example, the RAN and the CORE have different requirements in terms of latency and throughput needs leading to different platforms. To respect the stringent latency requirements of the RAN, a native container management system is preferred to ETSI-MANO. This latter could be deployed in another platform like the CORE where the functions are instantiated for a long period (e.g. HSS). The end-to-end approach will be a composition of platforms, each one is specialized in one domain.

Any element of the system shall be considered as a modular function. This seemingly obvious definition has several significant advantages:

- components can be swapped if better ones are available, provided that APIs between the components remain compliant [7];
- overall solution can be tailored for specific needs, solving the “one size does not fit all” dilemma: instead of building an “end-to-end hard-wired” solution, we can “build-to-order” the solution that best matches the needs thanks to an “orchestrator”;
- all system elements being components, we need to support recursivity in order to build efficiently complex structures. This is a proposition that is naturally supported with current component technologies ([VM in VM], [container in VM], [VM in container], [container in container]). Recursivity can be considered as another way of service-chaining [8].

The component is enhanced with additional procedures: BUILD, SHIP and RUN as inspired by [9] following object-oriented programming. 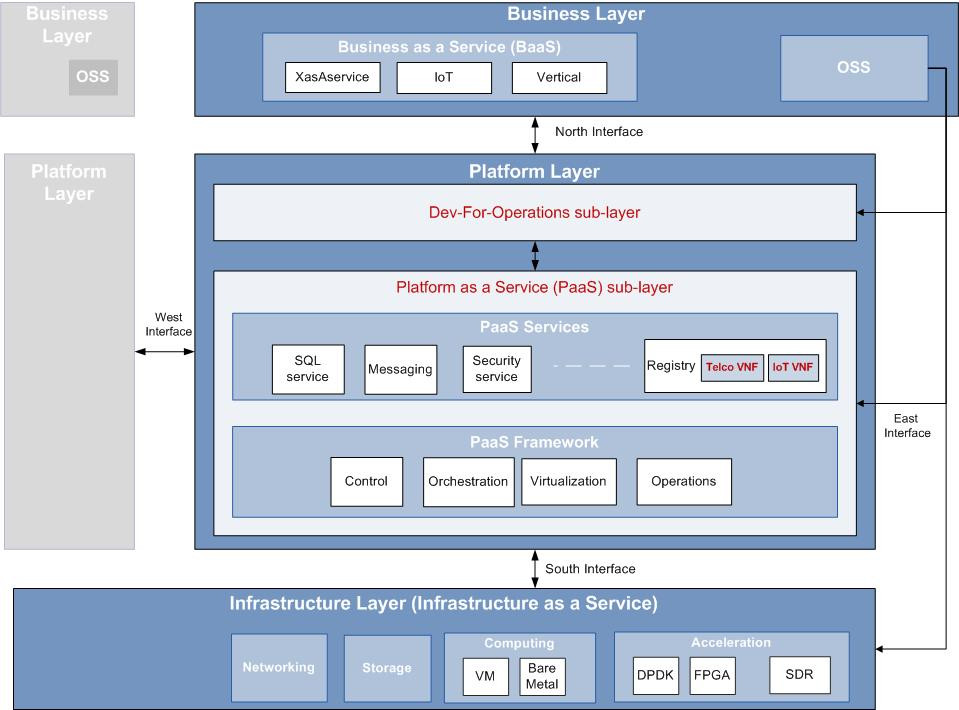 Network slicing, depicted in Figure 2, is expected to play a critical role in 5G networks because of the multitude of use cases and new services 5G will support. It integrates the vertical industries, supporting different and critical service (massive Machine Type Communications, ultra-Reliable Low Latency, enhanced Mobile Broadband) which should be rapidly deployed. These new use cases and services will place different requirements on the network in terms of functionality, and performance requirements. Thus, each network slice will require different workloads and different platform capabilities e.g. orchestration and management framework, networking control framework, etc to support their SLA needs. The scalability, the resiliency and the automation, which are strong requirements of the network slicing, are services handled once by the platform. 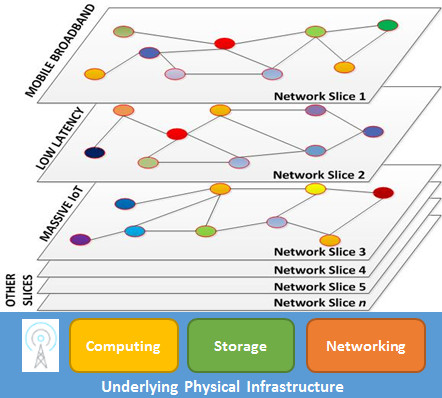 The network slices span multiple infrastructures: private and public clouds, supporting different execution environments ‘bare metal’, ‘real time’, ‘VM’, etc. For that, we see that the best approach to solve the network slicing is to adopt the platform approach. The Business layer will have an enhanced orchestrator in charge of first deploying the well-selected ancillary (orchestrator, intent-based controllers, message bus...) components following the need of the supported services (automotive, industry, machine type communication, etc) and mapping the different VNFs to the right nodes in the infrastructure layer, ask more resources if needed. 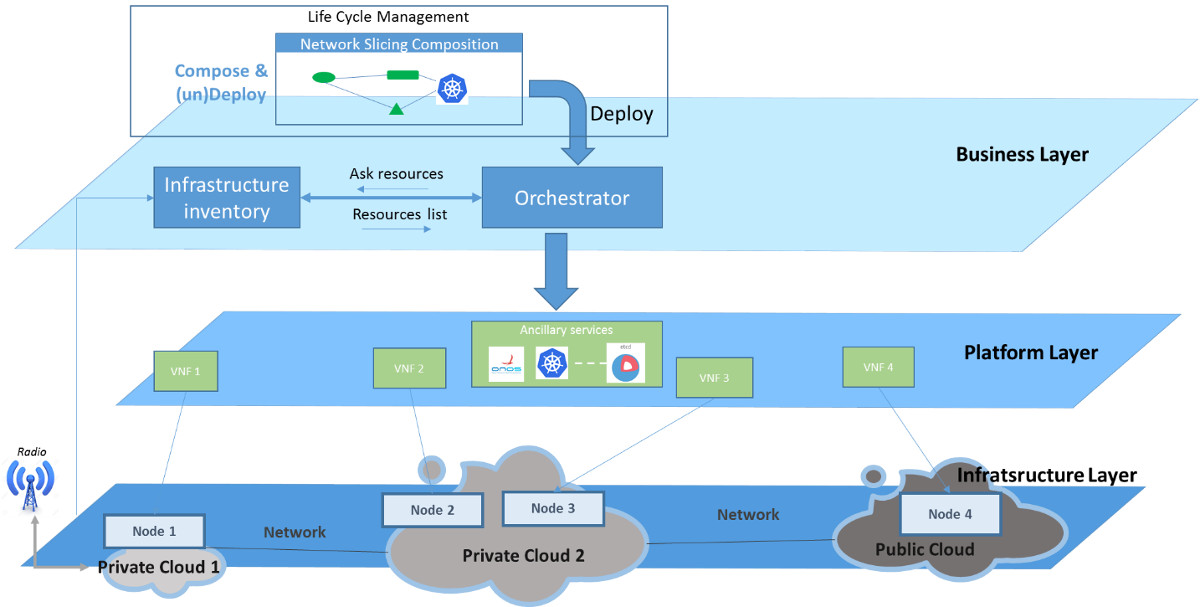 Currently, we are working on this platform based approach and defining all the required APIs/interfaces to compose platforms and abstract them. Many challenges are ahead of us related to the data model that should be used in the composition phase, the orchestrator, the new OSS that will be distributed among different platforms, etc. The proposed approach will be validated by a pilot supported and developed in NGPaaS (Next Generation Platform as a Service) project part of 5G-PPP phase 2.

Bessem Sayadi is a Research Manager in Nokia Bell-Labs France. He received M.Sc. (00) and Ph.D. (03) degrees in Control and Signal processing from Supélec, Paris-Sud University, with highest distinction. He is leading the Next Generation Platform as a Service project funded by EU in 5G-PPP Phase2. He is the technical manager of the Superfluidity project funded by EU in 5G-PPP Phase 1. His main research interests are in the area of Virtualization & Cloudification, Slicing and Multi-tenancy, 5G, Microservice Architecture. He has authored over 70 publications in journal and conference proceedings and serves as a regular reviewer for several technical journals and conferences. He holds 28 patents and has more than twenty patent applications pending in the area of video coding and wireless communications.

Laurent Roullet is currently leading the End-to-end Mobile Networks Virtualization & Verification research group at Nokia Bell Labs and he is located in Paris-Saclay.

Mubashir Husain Rehmani (M’14-SM’15) received the B.Eng. degree in computer systems engineering from Mehran University of Engineering and Technology, Jamshoro, Pakistan, in 2004, the M.S. degree from the University of Paris XI, Paris, France, in 2008, and the Ph.D. degree from the University Pierre and Marie Curie, Paris, in 2011. He is currently an Assistant Professor at COMSATS Institute of Information Technology, Wah Cantt., Pakistan. He was a Postdoctoral Fellow at the University of Paris Est, France, in 2012. His current research interests include cognitive radio ad hoc networks, smart grid, wireless sensor networks, and mobile ad hoc networks. Dr. Rehmani served in the TPC for IEEE ICC 2016, IEEE GlobeCom 2016, CROWNCOM 2016, IEEE VTC Spring 2016, IEEE ICC 2015, IEEE WoWMoM 2014, IEEE ICC 2014, ACM CoNEXT Student Workshop 2013, IEEE ICC 2013, and IEEE IWCMC 2013 conferences. He is currently an Editor of the IEEE Communications Surveys and Tutorials and an Associate Editor of the IEEE Communications Magazine, IEEE Access journal, Elsevier Computers and Electrical Engineering (CAEE) journal, Elsevier Journal of Network and Computer Applications (JNCA), Ad Hoc Sensor Wireless Networks (AHSWN) journal, Springer Wireless Networks Journal, KSII Transactions on Internet and Information Systems, and the Journal of Communications and Networks (JCN). He is also serving as a Guest Editor of Elsevier Ad Hoc Networks journal, Elsevier Future Generation Computer Systems journal, IEEE Access journal, the IEEE Transactions on Industrial Informatics, Elsevier Pervasive and Mobile Computing journal and Elsevier Computers and Electrical Engineering journal. He has authored/ edited two books published by IGI Global, USA, one book published by CRC Press, USA, and one book is in progress with Wiley, U.K. He is the founding member of IEEE Special Interest Group (SIG) on Green and Sustainable Networking and Computing with Cognition and Cooperation. He received “Best Researcher of the Year 2015 of COMSATS Wah” award in 2015. He received the certificate of appreciation, “Exemplary Editor of the IEEE Communications Surveys and Tutorials for the year 2015” from the IEEE Communications Society. He received Best Paper Award from IEEE ComSoc Technical Committee on Communications Systems Integration and Modeling (CSIM), 2017.