Softwarization of Radio and Wireless Networks

While SDR and SDN initially were parallel evolutions happening in isolated research communities, several European projects, more specifically the H2020 projects WiSHFUL, eWINE and ORCA are currently developing enablers to bridge the gap between SDR and SDN. These projects offer advanced software and hardware platforms in open state-of-the-art large-scale wireless test facilities that can be used and further extended by academic researchers and wireless developers.

During the past decades we have witnessed the explosive emergence of wireless technologies and standards, covering different ranges and different licensed and unlicensed spectral bands.

Some trends observed are (1) the ever-increasing number and diversity of wireless devices (2) running applications that become more critical and bandwidth-hungry, and having very diverging QoS requirements, and (3) the presence of multiple heterogeneous wireless technologies, often integrated in the same device, sharing the same physical environment and in many cases also sharing the same spectral bands. Unfortunately, as the wireless radio spectrum is a scarce resource, the available spectral bandwidth does not scale with the increasing bandwidth demands from wireless devices and applications. There is a hence a need to introduce new sophisticated techniques for accessing and sharing the wireless medium in a highly efficient manner.  Such techniques are expected to either improve the coordination within a given spectral band (horizontal spectrum sharing), or explore the possibilities of opportunistically using unused spectrum in underutilized and potentially licensed spectral bands (vertical spectrum sharing, also called dynamic spectrum sharing or DSS).

Wireless networks have become extremely complex systems that cannot be optimized anymore following traditional approaches such as design-time planning and simple one-size-fits-all configuration strategies after deployment. Instead there is an increasing need for more intelligent techniques, being cognitive radio networking solutions, that can monitor the dynamic behaviour of the network, for instance the dynamics of the wireless environment and the varying application demands, and based on that autonomously adapt the network and radio parameters to maximize network performance and QoS. In many cases different applications have to share the same wireless infrastructure and the same spectral bands, making it really challenging to meet the very diverging QoS requirements simultaneously. The basic control mechanisms that are provided today in wireless technologies are not adequate to deal at the same time with extreme (ultra-low latency, ultra-high throughput, ultra-high reliability) and diverging (low AND high data rate, time-critical AND non-time critical) communication needs.

Interesting softwarisation evolutions are happening at different levels and enable sharing of wireless infrastructure and spectrum:

While SDR and SDN initially were parallel evolutions happening in isolated research communities, several European projects, more specifically the H2020 projects WiSHFUL, eWINE and ORCA are currently developing enablers to bridge the gap between SDR and SDN. These projects offer advanced software and hardware platforms in open state-of-the-art large-scale wireless test facilities that can be used and further extended by academic researchers and wireless developers.

The WiSHFUL project1 adopts the general idea of software defined networking (SDN), implemented in core IP networks, and applies it to the domain of heterogeneous wireless access networks. WiSHFUL offers several software platforms that comprise data plane and control plane functionality for advanced radio and network control supporting different wireless platforms (such as standard Linux and Wireless Mac Processor [1] for IEEE 802.11, Standard Contiki, TAISC [2] and GITAR [3] for IEEE 802.15.4, ip.access and Airspan for LTE, and Iris [4] for SDR). Although different wireless technologies and platforms can be very heterogeneous in terms of memory and processing capabilities, and supported operating systems, protocols and tools, the software platforms offered by the WiSHFUL project come with a unified, technology-agonistic interface, called UPI or Unified Programming Interface (see Figure 1) [5]: 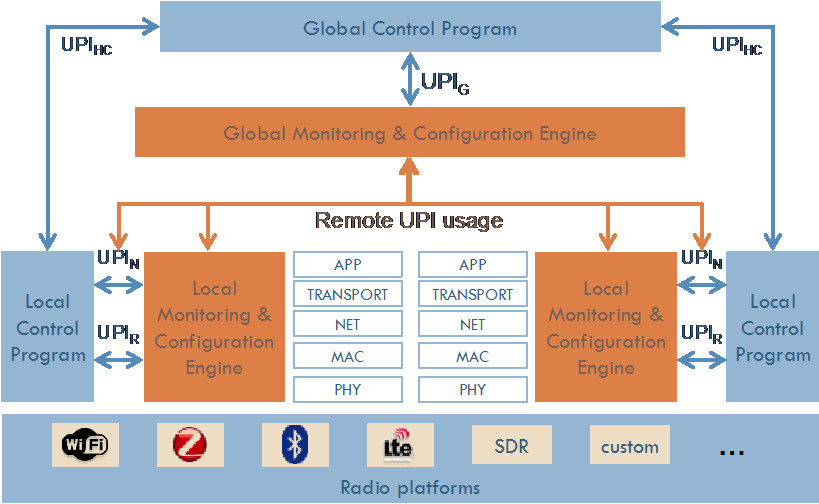 Using the WiSHFUL software platforms, wireless network solution developers can focus on the network optimisation without the need to dig into complex hardware and software specifications for different technologies and platforms. They only have to write control program(s) that directly call the required UPI functions for monitoring and control. 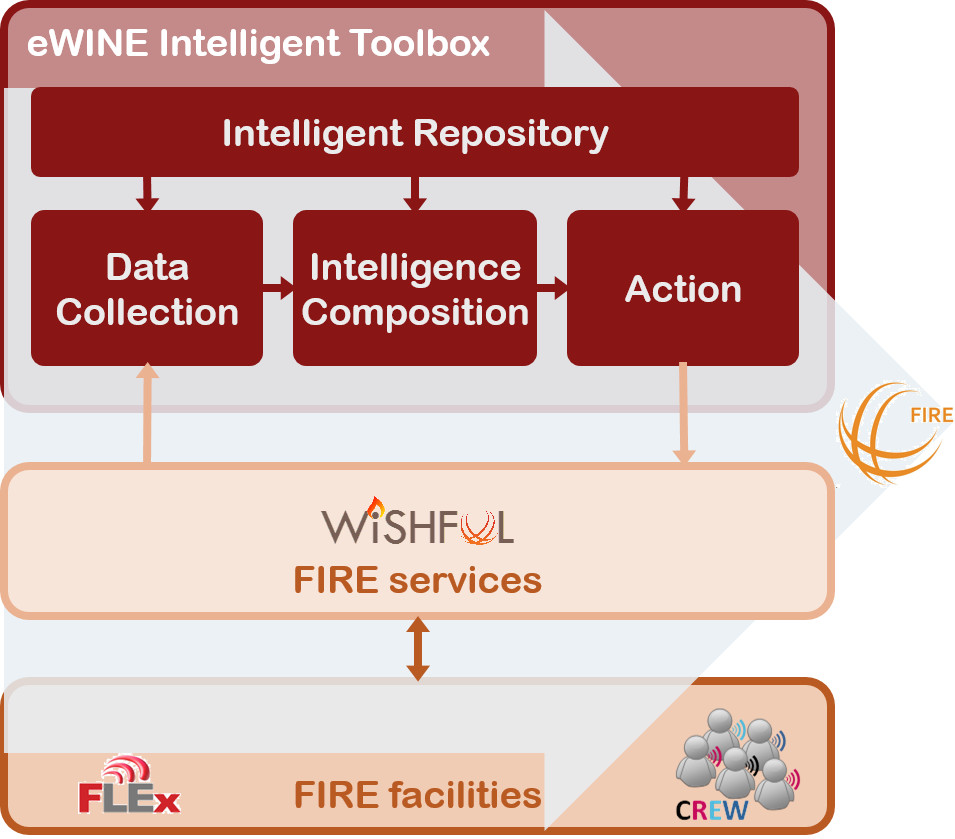 The ORCA project3 (starting in January 2017) will accelerate flexible end-to-end experimental validation by making open and modular software and hardware architectures available meeting the requirements in terms of runtime latencies, throughput, and versatility, the latter referring to the (re)configuration and (re)programming capabilities. Such architectures smartly use novel flexible radio technology, more-specifically real-time Software Defined Radio (SDR) platforms. ORCA will fill the gap between 1) fast design cycle and high versatility, but high runtime latency (typically offered by a CPU environment), and 2) low runtime latency, but slow design cycle and low versatility (as offered by an ASIC), which is illustrated in Figure 3. ORCA will provide a wireless SDN architecture by adding a high degree of flexibility at the radio level to adapt wireless networks to the dynamic nature of today's applications [7]. The main target of ORCA is offering appropriate interfaces to integrate network functionality with RF, PHY and medium access functionality in SDR devices, providing a data, control and management plane at all levels (radio and network). 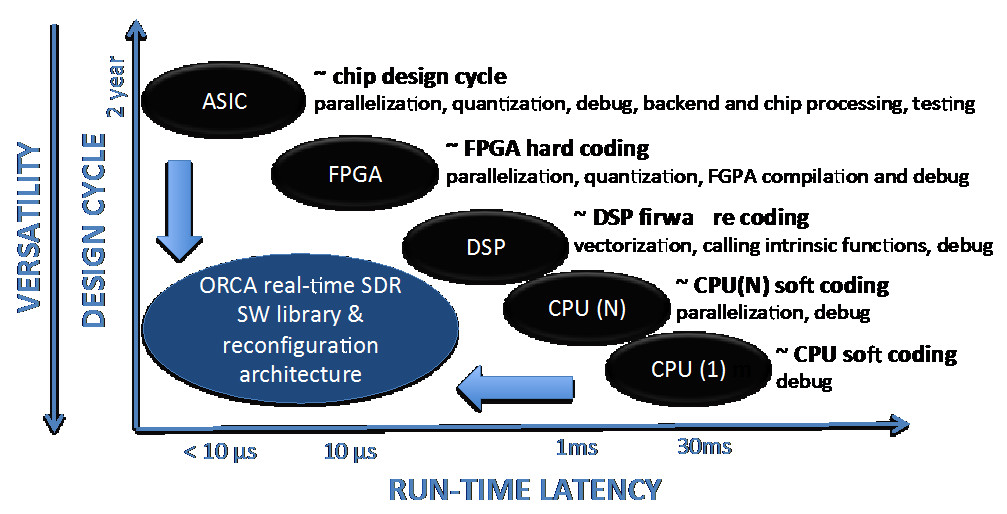 Ingrid Moerman received her degree in Electrical Engineering (1987) and the Ph.D. degree (1992) from the Ghent University, where she became a part-time professor in 2000. She is a staff member at IDLab, a core research group of imec with research activities embedded in Ghent University and University of Antwerp. Ingrid Moerman is coordinating the research activities on mobile and wireless networking, and she is leading a research team of about 30 members at IDLab-Ghent University. Her main research interests include: Internet of Things, Low Power Wide Area Networks (LPWAN), High-density wireless access networks, collaborative and cooperative networks, intelligent cognitive radio networks, real-time software defined radio, flexible hardware/software architectures for radio/network control and management, and experimentally-supported research. Ingrid Moerman has a longstanding experience in running and coordinating national and EU research funded projects. At the European level, Ingrid Moerman is in particular very active in the Future Networks research area, where she has coordinated and is coordinating several FP7/H2020 projects (CREW, WiSHFUL, eWINE, ORCA) and participating in other projects (Fed4FIRE, FORGE, FLEX, Flex5Gware).

Ingrid Moerman is author or co-author of more than 700 publications in international journals or conference proceedings.

Spilios Giannoulis received his Ph.D. (2010) in the area of routing protocols for wireless mobile sensor networks. From 2001 until 2015 he has been a researcher involved in several E.U. and national R&D projects at Industrial systems Institute (ISI) and the Applied Electronics Laboratory (APEL), University of Patras, Greece. From 2005 until 2015, he was also lecturing at the Technological Educational Institute (TEI) of Patras, Greece. He is currently a postdoc researcher in the IDLab research group of imec, Ghent, Belgium involved in several EU projects in the area of reconfigurable wireless networks. His main research interests are in the fields of wireless networks, mobile ad-hoc networks, wireless sensor networks, focusing on flexible and adaptive MAC and routing protocols, QoS provisioning, cross-layer and power aware system architecture design, with relevant publications in more than 20 international conferences and journals.

Eli De Poorter is a Professor at Ghent University. He received his master degree in Computer Science Engineering from Ghent University, Belgium, in 2006, his Ph.D. degree in 2011 at the Department of Information Technology at Ghent University and became a full-time professor at Internet and Data Lab research group (IDLab, www.IDLab.ugent.be) in 2015.  In addition to teaching several courses, he is involved in and/or research coordinator of multiple national and international projects related to future wireless networks. His main research interests include wireless network protocols, network architectures, wireless sensor and ad hoc networks, future internet, self-learning networks and next-generation network architectures. He is part of the program committee of several conferences and is the author or co-author of more than 90 papers published in international journals or in the proceedings of international conferences. He is also the creator of the patented IDRA architecture, a flexible communication framework for heterogeneous networked devices.

Xianjun Jiao received his bachelor degree in Electrical Engineering from Nankai University in 2001 and Ph.D. degree on communications and information system from Peking University in 2006. After his studies, he worked in industrial research institutes and product teams in the domain of wireless technology, such as Radio System Lab of Nokia Research Center (senior researcher), devices department of Microsoft (senior researcher) and Wireless Software Engineering department of Apple (RF software engineer). In 2016, he joined IDLab, a core research group of imec with research activities embedded in Ghent University and University of Antwerp. He is working as postdoc researcher at Ghent University on flexible real-time SDR platform. His main interests are SDR and parallel/heterogeneous computation in wireless communications. On his research track, 20+ international patents and papers have been authored/published.