Impact of SDN/NFV on Business Models

Abstract — This paper presents an analysis of the impact of Software Defined Networks [1] and Network Function Virtualization [2] on business models, primarily looking into Service Provider infrastructure and service offering evolution and eluding to some impact also for the vendor ecosystem.

The combination of Software Defined Networks (SDN) that allows dynamic programmatic networks, with Network Function Virtualization (NVF) that brings network function decomposition and programmatic orchestration, is not only disrupting the architecture and management of service providers network, but is also changing the service offering landscape.

First of all, when building a virtualized infrastructure, a network operator (or another party willing to become an infrastructure provider) can invest in a pool of general resources that are configured, on-demand, for specific purposes as needed, rather than investing in multiple pools of specific network devices with tailored functions. These pools can be:

These resources, provided by a set of 3rd parties, are deployed in a way that allows new business opportunities for infrastructure providers and new potential models for network service providers to operate.

To provide network functionality, a virtual function can be instantiated on-demand wherever it is needed in the network, rather than only at those points where the dedicated device is located. This decoupling of function and location means new possibilities for:

A typical NFV Infrastructure as a Service (NFVIaaS) use case is an example that opens up new business models between Service Providers. SP#1 may have a virtualized infrastructure for its own cloud services, its own NFV infrastructure, and it may offer access to this infrastructure to a 3rd party, SP#2. 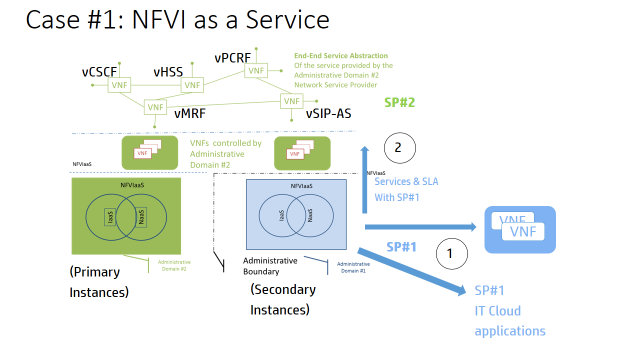 Fig 1. NFV Infrastructure as a service

Fig 1. highlights that some resources in the NFVI may be shared across Service Providers, while others may be dedicated. Access rights, policies, SLA, charging need to be carefully designed and monitored especially if combined with SDN and open programmatic access of the network paths to 3rd party Service Provider.

2.3 Actors and Layers in a Virtualized Network Infrastructure

Different actors can intervene in a fully virtualized network infrastructure, according to the use cases considered by the ETSI NFV ISG [3] 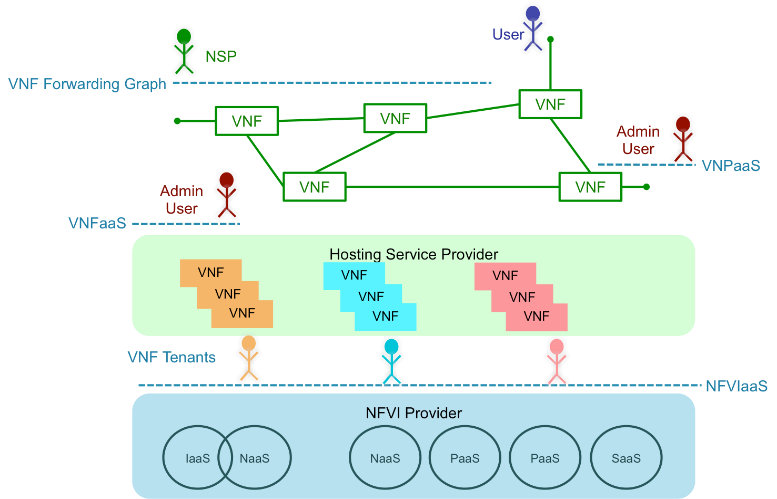 1) NFVI Providers offer the other actors access to datacentre and communication links that constitute the NFVI (NFV Infrastructure), mostly using the access models already described for the cloud, like IaaS and PaaS, but also for additional ones as well, as in the case of NaaS (Network-as-a-Service)

2) VNF Tenants run their Virtual Network Functions (VNFs) on top of the NFVI, and can provide these functions to potential users on an individual basis (VNFaaS), or together with additional tooling kits supporting higher-level integration and management (VNPaaS)

3) Admins in different enterprises integrate the VNFs into their network services, either for internal use or to actively provide them to third parties.

4) Network Service Providers assemble VNFs and attach them to a public network according to a VNF Forwarding Graph, creating a virtualised network service. In many cases, these services will imply the integration of virtualised and non-virtualised elements.

5) Finally, Users consume the services offered by NSPs or by their Admins.

Mixed scenarios, where a high level of integration is applied for certain kinds of functions, while other specialized ones are provided by specific tenants, are foreseeable as well.

Another important point is that any of the four degrees of freedom described above can be split into additional layers according to the state of the network infrastructure market, as well as to respond to regulatory changes. 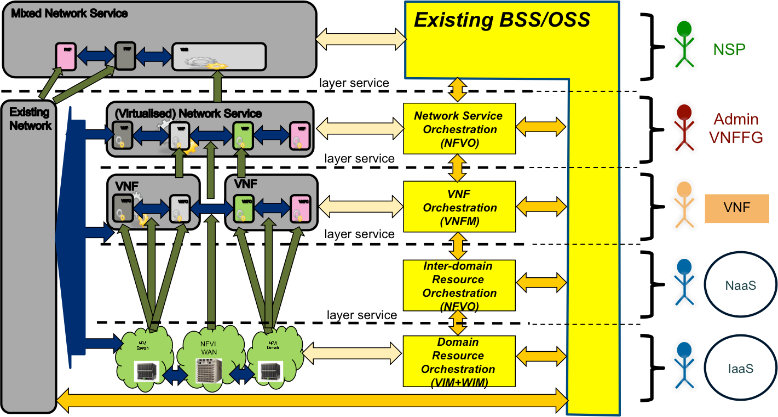 Fig 3. shows a split with two different kinds of NFVI providers, one dealing with single-domain resources (computing, storage, local networks) and the other integrating them with long-haul network connections; the first provides essentially IaaS capabilities, while the second offers NaaS.

NFV and SDN provide the technology that enables new business models for network and service providers, creating new opportunities for both existing and new providers. New capabilities can also be introduced: more usage-based charging models, more granularity in the service capabilities, including security, privacy and location. NFV-SDN service catalogs and marketplaces could be created, along with roles for new actors such as service brokers or clearinghouse. Regulation may also evolve to enable these changes and to maintain some of the key principles of an open, transparent concurrent economy.

However, NFV and SDN also disrupt the vendor business model, moving from a silo proprietary vendor stack, primarily CAPEX and licensed-based model, to a more hybrid, multi-vendor model, with a mix of licensed and open source support-based models. The entry barrier to produce solutions will be much lower, with pure software based solutions and open source leverage, which will allow new, smaller vendors to compete with the incumbents. Standardization and automation will enable multiple combinations and more plug-and-play solutions with choices between on-premises, SaaS or hybrid models.

Diego Lopez received his MS from the University of Granada in 1985, and his PhD degree from the University of Seville in 2001. Diego joined Telefonica I+D in 2011 as a Senior Technology Expert on network infrastructures and services. He is currently in charge of research and standardization activities related to network infrastructures within the Global CTO Unit. He joined Telefónica in 2011 after several years in the academic sector. During this period he was appointed as member of the High Level Expert Group on Scientific Data Infrastructures by the European Commission, and as member of Internet2 MACE.

Diego is currently focused on identifying and evaluating new opportunities in technologies applicable to network infrastructures, and the coordination of national and international collaboration activities. His current interests are related to network infrastructural services, new network architectures, and network programmability and virtualization.

Andy Reid is currently architect for BT’s project on network functions virtualisation. He is has been particularly concerned with removing packet performance bottlenecks in hypervisors and is now concerned with the operations and management on virtualised network functions and their supporting infrastructure platform. Andy has a long history in telecoms strategy and architecture and has a particular interesting in modelling, including functional modelling, data modelling, operational modelling, and performance modelling. In more recent years he has also done a substantial amount economic modelling for pricing, regulation and competition law.

Antonio Manzalini received the M. Sc. Degree in Electronic Engineering from the Politecnico of Turin. In 1990 he joined CSELT, which then became Telecom Italia Lab. He started his activities on research and development of technologies and architectures for future optical transport networks: in this context, he chaired ITU-T Questions contributing to the development of several ITU-T Recommendations on transport networks (e.g., SDH, OTN). He has covered several leading roles in European Commission funded projects on future networks. He served as TPC member of several IEEE Conference, and recently he was co-General Chair of EuCNC2014. His results are published in more than 110 papers. He is currently joining the Strategy and Innovation Dept. of Telecom Italia (Future Centre) addressing strategic scenarios and innovation activities mainly related to Software Defined Networks, Network Function Virtualization, Internet of Things and 5G. He is Chair of the IEEE SDN initiative.

Prof. Noël Crespi holds Masters degrees from the Universities of Orsay (Paris 11) and Kent (UK), a diplome d’ingénieur from Telecom ParisTech, a Ph.D and an Habilitation from Paris VI University (Paris-Sorbonne). From 1993 he worked at CLIP, Bouygues Telecom and then at Orange Labs in 1995. He took leading roles in the creation of new services with the successful conception and launch of Orange prepaid service, and in standardisation (from rapporteurship of IN standard to coordination of all mobile standards activities for Orange). In 1999, he joined Nortel Networks as telephony program manager, architecting core network products for EMEA region. He joined Institut Mines-Telecom in 2002 and is currently professor and Program Director, leading the Service Architecture Lab. He coordinates the standardisation activities for Institut Mines-Telecom at ITU-T, ETSI and 3GPP. He is also an adjunct professor at KAIST, an affiliate professor at Concordia University, and is on the 4-person Scientific Advisory Board of FTW (Austria). He is the scientific director the French-Korean laboratory ILLUMINE. His current research interests are in Service Architectures, Services Webification, Social Networks, and Internet of Things/Services.
http://noelcrespi.wp.tem-tsp.eu/