This article will explore V2X – Vehicle to Everything – leverage of Network Slicing and more specifically 5G Network Slicing, going into architecture and use cases.

With more and more vehicles on the roads, over one billion cars today but also trucks, trains and other motorized vehicles two main drivers are defining how this industry is moving to V2X, Vehicle to Everything communication (Figure 1): one is regulation, mainly to reduce casualties on the road; the other is user experience which ranges from enhancing driving experience for those who will still want to drive, to session continuity between home, work environment and driving. Many other use cases and value propositions address other segments: transportation industry, city management teams, road management teams, electric grid companies, operators that manage communication networks etc. 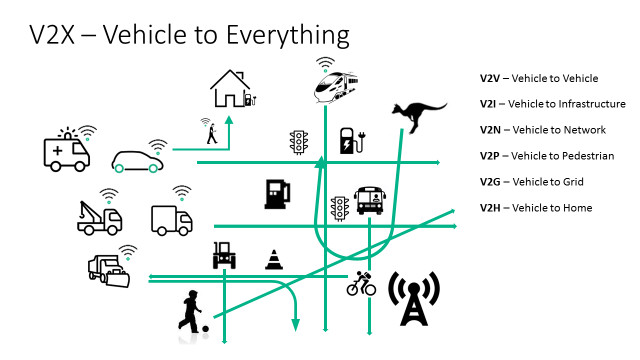 Fig. 1. Vehicle to Everything (source: HPE)

The number of sensors in both vehicles and road infrastructure is increasing and multiple communication channels exist between those different elements: infrared, 802.11p which is a protocol defined by IEEE and endorsed by ETSI ITS (International Transport System) standards, or more recently C-V2X (Cellular V2X) defined by 3GPP, all complementary as described in Figure 2. 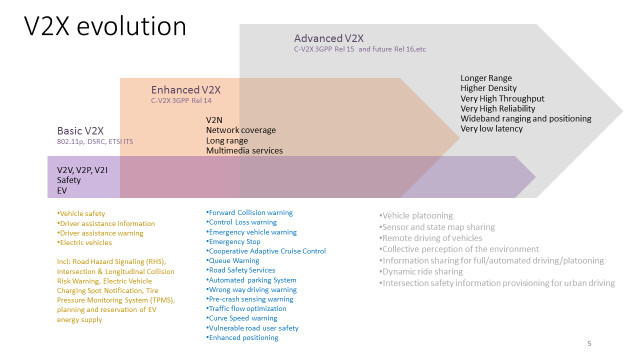 With 5G, the hope for V2X is to leverage 5G architecture which supports heterogeneous access to the same 5G Core and enables features such as higher bandwidth, higher density and ultra reliable low latency. Network Slicing is an additional key features of 5G in the context of V2X, and will be further expanded in the remainder of the article.

Network Slicing as defined by 3GPP [9] is ‘a network created by the operator and customized to provide a specific market scenario which demands specific requirements with end to end scope. For instance, an emergency car would typically access a low latency (and reliable?) network slice to communicate with emergency services, while people in a car watching a HD video streaming in the back seat would access a high bandwidth network slice. As the car moves from one cell to the other, the operator needs to deliver a continuous service with same QoS and ‘slice parameters’. Moreover, when the car is roaming to another operator’s network, the expectation is that the same type of slice is delivered by the new operator to ensure service continuity with no degradation of performance or level of service as shown in Fig. 3. 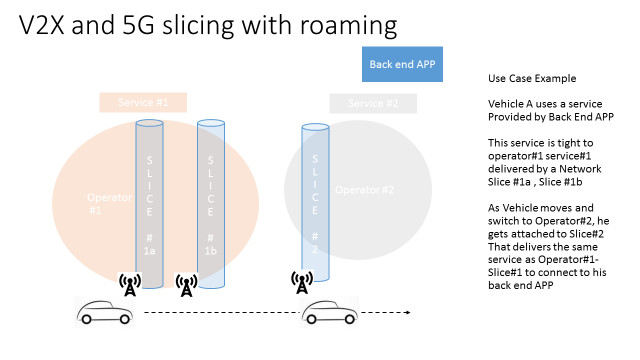 The situation can actually be more complex, since a given 5G ‘device’ could access simultaneously up to 8 slices. A given vehicle can have sensors sending maintenance data in a few small data packets per day; but some other sensors can be video cameras detecting a road hazard and broadcasting to near vehicles and informing the network for appropriate use: this requires high bandwidth and low latency. Similarly, radar sensor or cameras could detect an imminent collision with a high speed vehicle and require ultra low latency to stop the vehicles immediately. Futuristic scenarios even envision taking control of a vehicle remotely in case of some emergency or for safety reason in some industrial applications. The range of these use cases varies from low throughput to high bandwidth, low range to long range, no latency requirements to Ultra Reliable Low Latency Communication (URLLC), etc.

In addition, for privacy reason, some data being exchanged with the vehicle should be highly secured: data encrypted, traffic and management of the slice isolated and restricted to a limited set of users. The network slice would then be designed either with dedicated resources or shared resources, virtual or physical. Many combinations are theoretically possible and operators will have to decide which options they want to support and which service they want to offer.

In Fig. 4. Below, multiple slices are represented. The scenario describes an ambulance taking a patient to the closest hospital. The ambulance is using its GPS based itinerary to optimise the route to the hospital. Below is a set of services used and associated slices:

These two set of communications will be sending short messages but require low latency. So they will use a “low throughput low latency highly secure” network slice, Slice A.

2) The second set of messages is to share the echography of the patient between the ambulance and the targeted hospital. This communication requires a “high bandwidth and low latency, privacy” network slice, Slice B. 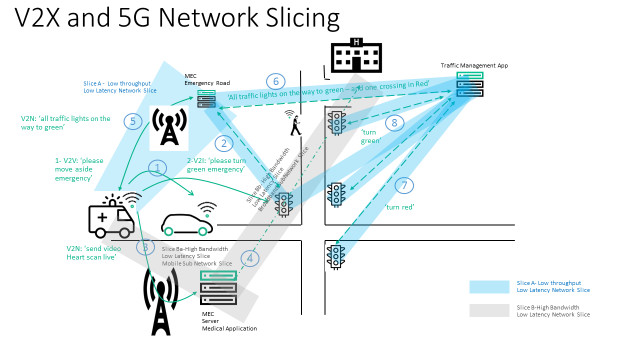 If we try to map the previous scenario on the 5G architecture as defined by 3GPP [10] we have a set of devices, or User Equipments (UE) -  the ambulance, the car, the traffic lights, the hospital – that share information via certain slices, or access applications. We also have different services: 1) V2V Use case for emergency vehicle warning, 2) V2I Emergency Stop Use Case, 3) V2N Traffic Flow Optimization. These services are actually listed in 3GPP V2X [5] as supported by LTE today but with limitations, i.e. the size of the messages exchanged in case 1) is 50-300 bytes, while with 5G these messages could be aggregated videos consolidating views from other vehicles and road units around, and transmitted with lower latency for the car to be able to process this information and automatically divert the car to the best place to let the emergency vehicle drive through. As described in Fig.5. multiple devices access the same slice, for instance the ambulance, the cars and the traffic lights access the low throughput low latency Slice A. Some devices access multiple slices, typically the ambulance access Slice A and Slice B. In that diagram, another slice has also been added for classical 5G mobile broadband that a pedestrian with his mobile would use, consciously or not. This is also to show that the V2X emergency and sensitive traffic is isolated from the enhanced Mobile Broadband (eMBB) traffic. 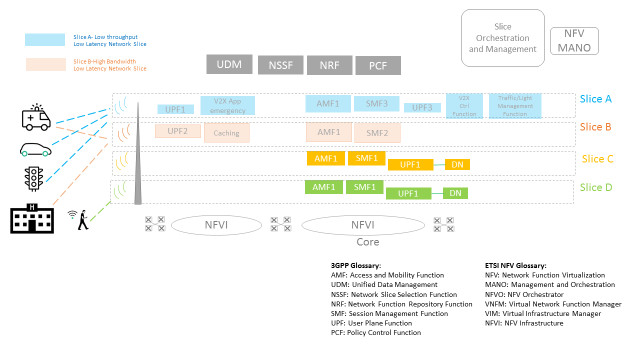 While V2X and more specifically C-V2X and Network slicing have been defined in LTE and could be deployed today, current product implementation and testing for V2X in most regions such as in Europe, US and Asia, have been done with 802.11p. Different scenarios are now envisioned by 3GPP and 5GAA, including co-existence of 802.11p and C-V2X in the same channel [8] with sensing, time sharing etc, but enhancements would be required to achieve this today and they would need to be standardized.

With 5G, multiple communication channels may occur from a car, including safety V2X, maintenance IoT, entertainment mobile broadband over cellular or Wi-Fi, etc. It is likely that with 5G supporting heterogeneous access to a common core, different access technologies could co-exist to deliver V2X, i.e. 5G with URLLC and High Bandwidth while moving, Wi-Fi reaching home, LORA for collecting sensor data and parking applications, 802.11p for anti-collision. While these communication channels could be used concurrently to deliver different services, the other requirement could be to deliver all these services with the same communication when available, i.e. with a unified 5G network, and rely on the infrastructure to provide appropriate gateways to reach out to other devices using different access technologies. This is one of the scenarios also explored by 3GPP [8]. Then use network slicing and SDN to provide different quality of service, isolation, etc depending on the service & devices.

As 3GPP progresses 5G specifications towards completion of Release 16 by end of 2019, a number of topics related to V2X still require work, including further study on enhanced use cases and architecture update to map with the 5G architecture. Some areas would benefit research from the academic part of the community on coexistence of 802.11 and cellular technologies in the same channel for instance, or V2X slicing continuity across heterogeneous access.

Marie-Paule Odini is Distinguished Technologist in HPE with over 25 years of telecom experience. She is focusing on customer innovation and emerging trends in the communication industry including NFV, SDN, IoT, big data and 5G and leads technology discussions and solution roadmaps towards 5G inside HPE. She is also involved in industry forums and standard organization such as ETSI NFV Vice Chair, IEEE SDN Chair and Editorial board member, 5G Americas co-author of Network Slicing and V2X white paper and more recently as co-chair of TIP (Telecom Infra Project) new E2E network slicing project.

Catalin Meirosu joined Ericsson Research in Stockholm, Sweden in 2007 and is currently a master researcher there. He drives research and innovation for network management for unified cloud and carrier networks infrastructure. Prior to Ericsson, he was a project development officer with TERENA (now GEANT) in Amsterdam. Catalin holds a BSc (1999) from Transilvania University in Brasov, Romania, an MSc (2000) and a PhD in telecommunications (2005) from Politehnica University, Bucharest, Romania. Throughout his PhD studies, Catalin was a project associate at CERN, Geneva, Switzerland, working on network technologies for the data acquisition system of the ATLAS experiment at the Large Hadron Collider. Catalin has six granted patents and co-authored over thirty-five scientific papers. He worked on network measurements, monitoring, self-management and DevOps in the European-funded international research projects ESPRIT SWIFT, FP6 NoAH, FP7 4WARD and UNIFY. Catalin was a guest editor for the 2015 IEEE Communications Magazine Special Issue on Network and Service Virtualization and is a guest editor for the International Journal of Network Management Special Issue on Software-Defined Operations to appear in 2016.